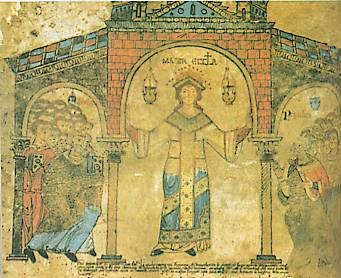 On this Second Sunday of Advent, the liturgy focuses on Jerusalem, the mystery represented by the ancient Roman stational church. Stational churches are those churches in Rome designated on given days during Advent and Lent, and on the great festivals of the year, as the destination of a solemn procession and the place of the Pope’s solemn Mass. On the day of a stational Mass the faithful would assemble in one church — that of the collecta or gathering — and then go in procession, singing the Litanies of the Saints, antiphons, and psalms, to the church where the Bishop of Rome, surrounded by his clergy and throngs of the faithful, would celebrate the Holy Mysteries.

These stational Masses were, in fact, the great manifestations of the Eucharistic unity of the City and of the world, Urbis et Orbis. In recent years there has been a revival of interest in the stational churches, and this for two reasons. First: one cannot really understand the choice of the antiphons and other texts of a given Mass without referring to the particular context, the stational church, that inspired them. The texts of these Masses form an organic whole with their native context, the stational church in Rome. Second: we are Roman Catholics. Rome is our mother Church. From the Holy Roman Church we receive our liturgy, the expression of all that we believe and hold dear.

Today’s stational church is the Basilica of the Holy Cross in Jerusalem. The Romans have always considered the church built by the Empress Saint Helena on earth transported from Jerusalem in Palestine as the real presence of Jerusalem in Rome. Going to the Basilica of Santa Croce was commonly referred to as “going up to Jerusalem.” There the faithful could venerate the relics of the True Cross and of the title that hung above the head of the crucified Lord of Glory.
Jerusalem has four levels of meaning in the sacred liturgy. When we encounter Jerusalem in the Proper Chants of the Mass, as we do today, it refers to this fourfold mystery. At the foundation of it all is the ancient city of Jerusalem where Our Lord suffered death and rose in glory, the Jerusalem of the Cenacle, the Jerusalem of Pentecost. “Penance and remission of sins should be preached in His name unto all nations, beginning at Jerusalem” (Lk 24:47).

The second reference is to the Church one, holy, catholic, and apostolic: the Jerusalem that is the home and mother of all nations on earth. Concerning the Church, the psalmist prophesied: “Glorious things are said of thee, O city of God. . . . The dwelling thee is as it were of all rejoicing” (Ps 86:7).

The third reference is to the heavenly Jerusalem, the immaculate bride of the Lamb described in the Apocalypse of Saint John. “He took me up in spirit to a great and high mountain: and he shewed me the holy city Jerusalem coming down out of heaven from God, having the glory of God, and the light thereof was like to a precious stone, as to the jasper stone, even as crystal” (Ap 21:10–11).

The fourth reference, finally, is to the soul of the faithful Christian. Every soul is a mystical Jerusalem made lovely by grace and destined to be the bride of the Lamb. “How beautiful art thou, my love, how beautiful art thou! Thy eyes are doves’ eyes, besides what is hid within” (Ct 4:1). With this as background, the Proper Chants of the Mass and Divine Office of the Second Sunday of Advent come alive with the most glorious resonances. “Out of Sion, the loveliness of His beauty, God shall come manifestly” (Ps 49:2).