Skip to content
HomeAdoration of the Most Holy Sacrament of the AltarHe Who Has an Ear, Let Him Hear 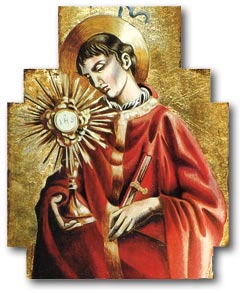 New York Again
Yesterday I returned to the Italian Consulate in New York City to pick up my visa. The magnificent Church of Saint Jean–Baptiste at Lexington and 76th Street is just a short walk from the Consulate. Sister Barbara Ann, A.S.C.J. and I were there for the 12:15 p.m. Mass. I concelebrated with Father Bernard Camiré, S.S.S., and Deacon Richard Russo assisted. The late John Cardinal O’Connor described Saint Jean–Baptiste as “quite possibly the most beautiful church in New York.”

Church of Saint Jean–Baptiste
The beauty of Saint Jean’s is more than the effect of its architecture and gorgeous appointments. The church has a spiritual beauty that is the radiance of holiness: the effect of nearly a century of daily adoration of the Most Blessed Sacrament exposed. The church is staffed by the Fathers of the Blessed Sacrament, spiritual sons of Saint Peter Julian Eymard.

Saint Peter Julian Eymard (1811–1868)
After Mass there was a prayer to Saint Peter Julian Eymard and the veneration of his relic by the faithful. Last August 2nd, on his liturgical memorial, I preached on this saint who has become for me an intercessor, a model, and a friend. Saint Peter Julian’s Eucharistic vocation unfolded amidst sufferings of the heart and painful detachments. God called him out of the religious family he loved — the Marist Fathers — to begin a new work, a Cenacle entirely devoted to the Blessed Sacrament. From the beginning this new Eucharistic work comprised priests, consecrated women, and laity. He challenged his little family of adorers to set souls ablaze with Eucharistic fire.

For Peter Julian, adoration of the Blessed Sacrament had an apostolic dimension. He reached out, in particular, to poor adolescents and adults who, for one reason or another, had not received their First Holy Communion, and to “fallen priests,” those unfortunate priests who, out of weakness, found themselves cut off and living in a state of spiritual, emotional, and often material, misery. The very same needs exist today, one hundred-fifty years later. The number of baptized Catholics who have never received their First Holy Communion is staggering. Who will reach out to them? Who will take them by the hand and lead them to the altar? The preparation of young people and adults for their First Confession and Holy Communion is an urgent work, and one that the Heart of Jesus burns to see carried out.

And what of so many “fallen priests” cast aside, and living in dejection with no one to care for them spiritually? Saint Peter Julian understood that Our Lord was asking him to minister to troubled priests and guide them back to the altar, that is, to spiritual health and to holiness. Jeremiah’s prophecy holds out a series of consoling promises for priests who have fallen: “If you return I will restore you, and you shall stand before me. If you utter what is precious, and not what is worthless, you shall be as my mouth” (Jer 15:19).

In the Blessed Sacrament Saint Peter Julian Eymard recognized “the treasure hidden in the field” (Mt 13:44) and “the pearl of great price” (Mt 13:46). He gave up all that he had to possess the mystery of the Eucharist and to be possessed by it. Peter Julian Eymard is a saint for the Church today: a Church called to rediscover Eucharistic adoration and to live “from the altar and for the altar”; a Church that will be incomplete so long as so many of the baptized are not receiving the Sacred Body and Precious Blood of Christ; a Church suffering in priests who broken and wounded with no one to care for their souls. Saint Peter Julian, share with us your passion for the Eucharist, that we may be made worthy of the promises of Christ! 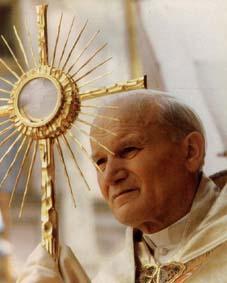 In 1891 Dom Maréchal founded the Cistercian Adorers of the Blessed Sacrament at Pont–Colbert in France. The Congregation joined perpetual adoration of the Blessed Sacrament to the traditional Benedictine observance. From France it spread to Holland and to North America. Dom Maréchal’s Congregation was weakened greatly by the First and Second World Wars. By 1950 its remaining houses had, for various reasons, abandoned their specifically Eucharistic characteristics.

Monasteries of Adoration Today?
Since that time, especially in the wake of Pope John Paul II’s Year of the Eucharist, there has been a revival of interest in Dom Maréchal’s project. While there are many monasteries of adoration for women — I am thinking of the Tyburn Benedictines and of the Benedictines of Perpetual Adoration — there are very few for men. The Monastery of Santa Cruz in Guadalajara, Mexico, a foundation of Santa Croce in Gerusalemme in Rome, has, in fact, made Eucharistic adoration a defining characteristic of its identity. Will other monasteries of Eucharistic adoration sprout from the ancient Benedictine–Cistercian tree? “He who has an ear, let him hear what the Spirit says to the churches” (Ap 2:29).