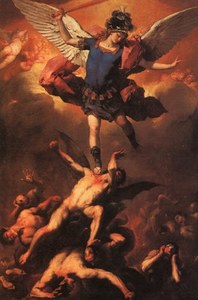 Angels Everywhere
One of the most striking things about Rome’s churches — and about Italian churches in general — is that they are full of representations of the angels. American churches in contrast, especially those built in the last fifty years, are strangely devoid of angelic imagery. In Italian churches there are angels everywhere: all sorts of angels. There are majestic angels of graceful athletic appearance, angels in splendid apparel playing musical instruments, and playful little angels with fat cheeks and chubby legs. In Italian churches, one is always conscious of praising God in conspectu angelorum, “in the sight of the angels” (Ps 137:1).

Angels in the Family
Whenever I have the good fortune to be in the Eternal City, I travel two hours south to visit my mother’s cousins at the family’s ancestral home in the little village of Sepicciano.

Baroque in style, the palazzo was built in the early 1700s. Amazingly, there too, angels are depicted everywhere! Over the imposing front door, the family coat of arms bears the sword of Saint Michael the Archangel, patron saint of the house and of the family. Appropriately, the motto of the Onoratelli family is that of the Archangel Saint Michael, Quis ut Deus? Quis resistet Sancti Michaelis gladio? (Who is like unto God? Who can withstand the sword of Saint Michael?) The shield of the coat of arms is held aloft by two chubby angels — both of them blissfully naked — and smiling broadly over the street below! To the right of the front door is a gallery of arches and, over each arch, is a smiling cherubic face. Not two of them are alike. Clearly, this house was built by Christians conscious of the presence of the angels and of their involvement in everyday life.

Saint Michael Delivers Don Clemente
Across from the palazzo adorned with images of the angels stands the family’s private chapel, a church constructed in honour of Saint Michael the Archangel by my ancestor, the Marchese Clemente Onoratelli (1669–1729), and consecrated in 1743. Over the altar hangs a large painting of Saint Michael defeating the devil. According to family legend, Clemente Onoratelli, beset with the vice of gambling, had made a pact with the devil so as always to win. After this pact, he found himself anxious, unhappy, and unable to sleep. One night, Saint Michael the Archangel visited him in a dream, saying, “Build a church in my honour, and I will undo this evil pact, and become your protector and the protector of all your family.” Don Clemente rose the next morning and ordered the building of the church of Saint Michael on the slope facing his palace.
In the Sight of Angels

The church was bombed and very nearly destroyed on October 15, 1943. After the War, it was restored at great cost. Apart from the majestic Saint Michael over the altar, the vaulting of the church’s nave is marked by a series of cherubic heads, all of them smiling, made in the same Baroque style as those of the house. Again, the presence of the angels is something believed, something celebrated, an invisible reality depicted outwardly.
I cannot help but question the absence of an angelic iconography in today’s churches. And very rare indeed are homes and even monasteries graced with images of the angels! Out of sight, out of mind? The angels are as present today to us as they were to the builders of the Basilica of Santa Croce and to my ancestors in the village of Sepicciano, but we, sadly, may not be present to them.

Angels at the Liturgy
Are we in danger of forgetting the angels? While the liturgy mentions them repeatedly, all too often we assist at the liturgy as if the angels were not there, joining in our praises, observing our attitudes, grieving over lack of zeal, and rejoicing to see us recollected and reverent. Saint Benedict speaks explicitly of the presence of the angels in Chapter 19 of the Rule: “We must therefore consider how we should behave in the sight of the Divine Majesty and his Angels, and as we sing our Psalms let us see to it that our mind is in harmony with our voice” (RB 19:6-7).

From Heaven Sent
One thing is certain. We need the angels. God created the angels for the praise of his glory and for our salvation, that is, to participate in his work of bringing us to wholeness, to peace, and to life everlasting in his presence. The angels are sent to us to comfort us in the hour of trial and affliction. Saint Luke, the evangelist most sensitive to angelic interventions, relates that an angel was sent to console Jesus during His agony in the garden (cf. Lk 22:43).

Under the Protection of the Angels
We are in great need of angelic assistance. We need the comfort of their presence, the healing ministry of their hands, and the beauty of the praise that ceaselessly they offer God. While we have no depictions of the angels in this little church and no smiling angelic faces on the outer walls of the monastery, we do have today’s feast and the daily celebration of the Sacred Liturgy to remind us that angels, unlike us, never forget. May they hold us in their prayer today and cover us with their protection. Who, indeed, can withstand the sword of Saint Michael?