Six years ago at this time I was in my beloved ancestral town of Piedimonte–Matese for the procession of the relics of Sant’Antonio. This is what I wrote:

Organic Continuity of Popular Piety
Since my arrival here in Sepicciano di Piedimonte d’Alife (Piedimonte Matese) there has been a procession or feast nearly every day in one or more of the surrounding paesi. Popular Catholicism is alive and flourishing. There is, in fact, more organic continuity in the expression of popular piety than in the Sacred Liturgy. Whereas the Sacred Liturgy, easily manipulated and refashioned by the clergy, has become a devastated vineyard, popular piety remains in the hands of the people who are, instinctively attached to tradition and opposed to changes in the expression of their devotions.

Arrival of Saint Anthony’s Relics
Last evening the relics of Saint Anthony of Padova arrived in Piedimonte d’Alife. A large fragment of the Saint’s body was presented in a gilded bust of the saint, which I had the honour to carry, together with three Franciscan friars, through the streets of Piedimonte. All the priests present, including me, had the privilege of carrying in front of the gilded bust of Sant’Antonio another relic enshrined in a reliquary. 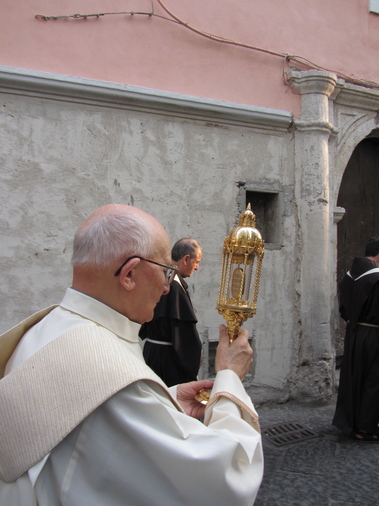 Procession Through the Streets
The entire town of Piedimonte turned out, in one way or another, to welcome Sant’Antonio. The arrival of the relics is understood to be a true visitation of the Saint himself, who comes in the Name of Jesus Christ, to distribute blessings, graces, and healings of soul and body. The municipal government was present, as were the military, the Police and Fire Departments, and various other representatives of civil life. Those who did not march in the procession, to the accompaniment of a marching band, made the sign of the Cross as the procession passed by. People of all ages responded with devotion to the passage of Sant’Antonio: little children dressed in Franciscan habits in honour of the miracle-working Saint; teenagers trying to look cool and, yet, moved nonetheless to cross themselves and gaze in wonder at the relics; young families; nonni (grandparents and great-grandparents); poor, rich, healthy, and sick. The passage of Sant’Antonio drew people out of their shops and houses and into the streets. 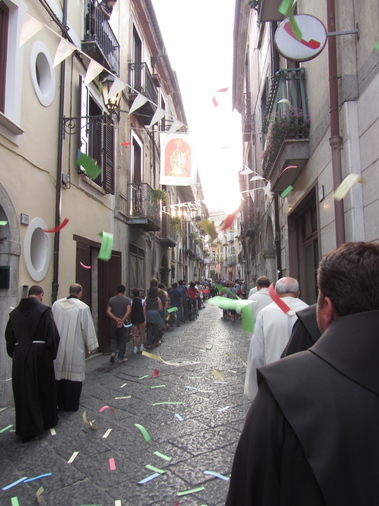 Floral Carpets Beneath Our Feet and Showers of Messages
As we approached the destination of the procession, a large open piazza where an altar was erected for Holy Mass, there appeared under our feet thirteen “carpets” made of flower petals representing the lily, the symbol of Saint Anthony of Padua. From the balconies and open windows above our heads, people were showering handful after handful of strips coloured paper. On each piece of paper a sentence in honour of Saint Anthony was written. Two of these fell into my hands. I read them and slipped them into the pocket of my habit. On the first I read, Dottore delle anime guariscici, “Doctor of souls, heal us” — and on the second, Per Antonium ad Iesum, “Through Anthony to Jesus.” 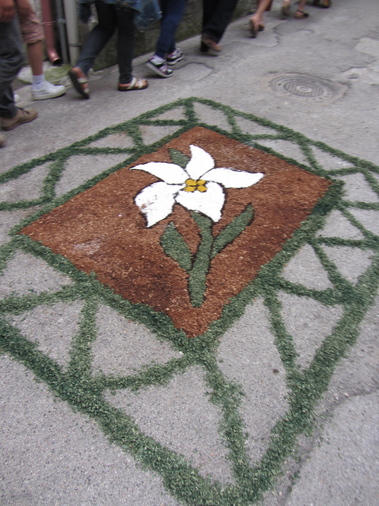 Carrying the Reliquary
A third of the way through the procession Don Salvatore, the parish priest of Sepicciano slipped a stole over my head and gave me the reliquary to carry. I don’t know if it was by coincidence or design, but I carried the reliquary past the Monastero di San Benedetto, where the Benedictine Nuns of the Most Holy Sacrament keep a vigil of adoration and reparation before the Blessed Sacrament, day and night. I passed directly under the statue of Saint Benedict in his niche; surely he looked down upon me with pleasure, seeing in my hands the precious relics of Sant’Antonio, Doctor of the Church. 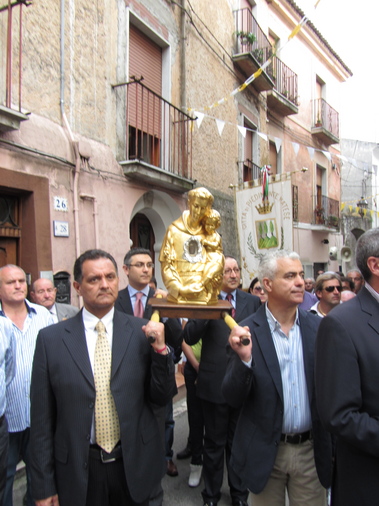 Holy Mass in the Piazza
When we arrived at the piazza everything was ready for the celebration of Holy Mass for the Ascension of the Lord. The diocesan choir sang a polyphonic setting of the Ordinary in Latin. (The Propers, alas, were entirely omitted in favour of popular songs.) A Franciscan Father from the Sanctuary of Saint Anthony in Padova preaching a brilliant homily, presenting Sant’Antonio as a witness to the risen and ascended Lord. He mentioned a fact hithertofore unknown to me, that is, that when the body of Saint Anthony was removed from his tomb, physicians found his vocal cords perfectly intact, the very vocal chords with which he had preached the Gospel tirelessly until, at the age of 36, he died, consumed with holy zeal, saying, Video Dominum meum, “I see my Lord.” 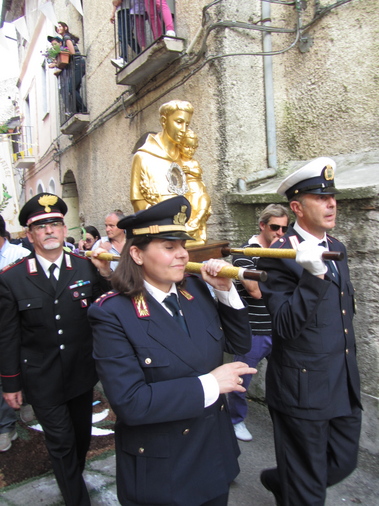 The Faith of the Ages
After Holy Mass, yet another procession formed, this time to transport the relics to the Cappella di Sant’Antonio, a small church in a neighbouring street, where they were to remain exposed to the veneration of the faithful who had organized themselves, according to various confraternities and parish societies, to pray before them through the night.
Catholicism is alive here. The Faith of the Apostles and the Saints flourishes among the people, rich and poor, young and old, educated and illiterate. Catholicism here is in the air one breathes and in the water one drinks. It is in the bread, the oil, and the wine on every table. Here one still finds a culture shaped by the cultus of the living God, who has revealed Himself merciful, powerful, and glorious in His Saints.