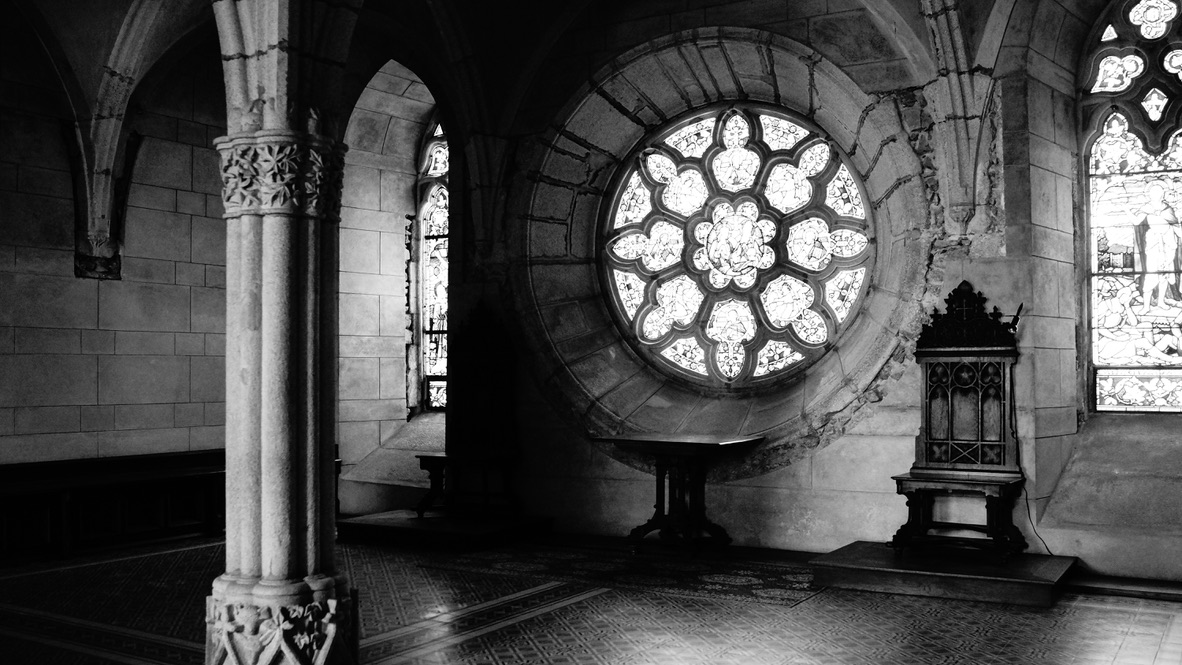 Chapter House at the Abbey of Vyšší Brod, Czech Republic

CHAPTER XXIV. What the measure of excommunication should be
1 Mar. 1 July. 31 Oct.
The measure of excommunication or chastisement should be meted out according to the gravity of the offence, the estimation of which shall be left to the judgment of the Abbot. If any brother be found guilty of lighter faults, let him be excluded from the common table. And this shall be the rule for one so deprived: he shall intone neither Psalm nor antiphon in the Oratory, nor shall he read a lesson, until he have made satisfaction. Let him take his meals alone, after those of the brethren so that if, for example, the brethren eat at the sixth hour, let him eat at the ninth: if they eat at the ninth, let him eat in the evening, until by proper satisfaction he obtain pardon.

It is clear that for our father Saint Benedict, chastisements and satisfactions are part and parcel of everyday Benedictine life. We read in the Epistle to the Hebrews:

Yet you have lost sight, already, of those words of comfort in which God addresses you as his sons; My son, do not undervalue the correction which the Lord sends thee, do not be unmanned when he reproves thy faults. It is where he loves that he bestows correction; there is no recognition for any child of his, without chastisement. Be patient, then, while correction lasts; God is treating you as his children. Was there ever a son whom his father did not correct? (Hebrews 12:5–7)

The abbot fails in his duty as a father when he does not administer corrections and discipline those brothers who are, as Saint Benedict said yesterday, “balky, disobedient, proud, given to murmuring, transgressors of the Holy Rule, and disdainful of the orders of their seniors.” Generally, it is not wise for the abbot to administer a correction or impose a chastisement on the spot or as soon as he notices a fault. The abbot needs to be in a state of interior calm when he administers correction, and not act impulsively in the heat of his own emotions of displeasure, anger, exasperation, or indignation. The abbot also needs to wait until a brother is disposed to receive the correction and in a state of mind that will allow him to benefit from the chastisement. Sometimes the abbot will be obliged to let weeks and months pass before seeing the opportune moment for correction and chastisement.

Brothers respond differently to correction and chastisement. For example, their is Brother Rufus. As soon as he is corrected, he begins to lament that he never does anything right, that his whole life is a series of blunders, that he is a failure, an incorrigible wreck of a man, and a piteous excuse for a monk. Brother Rufus, when corrected, blots out all that in the past he has done right. He falls into dark melancholy and ruminates despondent thoughts. Then Brother Rufus’s abbot says, “What have I done? How shall I correct poor old Rufus if, every time I point out a fault, he falls into such dejection.” When correcting Brother Rufus, the abbot must say, “Dear Brother Rufus, I am going to correct you about something, but I want to tell you first that you have made great progress, that you are a good element in the community, and that I appreciate your qualities and your contributions.” After making the correction, the abbot must encourage Brother Rufus and not allow him to wallow in self–pity or fall into all-or-nothing thinking: “I never do anything right. I am always doing the wrong thing. I will never change.”

Then, there is Brother Goswin. Poor Goswin. As soon as he is corrected, he bristles and becomes defensive. His eyes blaze with indignation and the veins in his head begin to bulge out. He cannot admit imperfections or mistakes. He is “grand” with God and all men. Brother Goswin says to himself, “Ah, the poor abbot! He himself is so full of faults that he cannot see rightly. And he cannot see me rightly. I am, after all, more intelligent, right-thinking, virtuous, and insightful than the abbot, and certainly smarter than the other brethren.” And so, Brother Goswin stiffens himself haughtily and refuses the correction.

Brother Leocadius is an emotional sort of fellow. As soon as he sees the abbot coming to him, or as soon as the abbot asks to see him, his eyes fill with tears. He easily feels misunderstood and unloved. Brother Leocadius learned as a small boy that by bursting into tears he could get Mummy to change her mind, or get Daddy to mitigate a punishment.  And so Brother Leocadius grew up to be something of an emotional manipulator, making it difficult for the abbot to administer a salutary correction.

In each one of us there may be a Brother Rufus, a Brother Goswin, and a Brother Leocadius, or maybe a mixture of all three. These are the characters who make it difficult for the abbot to correct faults and to administer salutary chastisements. The abbot, for his part, must not allow himself to be daunted by Brothers Rufus, Goswin, and Leocadius. On the contrary, he must seek the light of the Holy Ghost and, in all his teachings and actions, beseech Jesus, the Good Shepherd, the Divine Physician, the Master meek and humble of heart to speak and act through him. And he must never depart from the teachings of Saint Benedict in Chapter XLIV:

The abbot must be chaste, sober, merciful, ever preferring mercy to justice, that he himself may obtain mercy. Let him hate sin, and love the brethren. And even in his corrections, let him act with prudence, and not go too far, lest while he seeketh too eagerly to scrape off the rust, the vessel be broken. Let him keep his own frailty ever before his eyes, and remember that the bruised reed must not be broken. And by this we do not mean that he should suffer vices to grow up; but that prudently and with charity he should cut them off, in the way he shall see best for each, as we have already said; and let him study rather to be loved than feared.