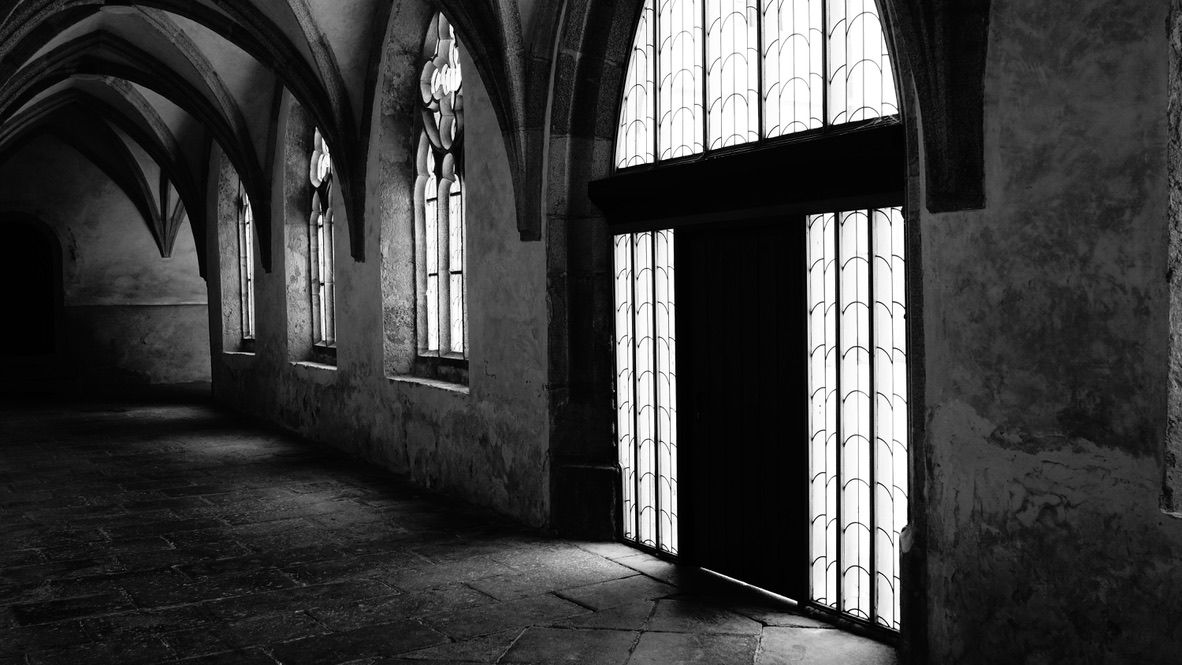 CHAPTER XI. How the Night-Office is to be said on Sundays
13 Feb. 14 June. 14 Oct.
On Sunday let the brethren rise earlier for the Night-Office, which is to be arranged as follows. When six Psalms and a versicle have been sung (as already prescribed), all being seated in order in their stalls, let four lessons with their responsories be read from the book, as before: and to the last responsory only let the reader add a Gloria, all reverently rising as soon as he begins it. After the lessons let six more Psalms follow in order, with their antiphons and versicle as before; and then let four more lessons, with their responsories, be read in the same way as the former. Next let three canticles from the Prophets be said, as the Abbot shall appoint, which canticles are to be sung with an Alleluia. After the versicle, and the blessing given by the Abbot, let four more lessons from the New Testament be read as before; and at the end of the fourth responsory, let the Abbot begin the hymn, Te Deum laudamus. After the hymn, let the Abbot read the lesson from the Gospel, while all stand in awe and reverence. The Gospel being ended, let all answer Amen. Then let the Abbot go on with the hymn, Te decet laus; and after the blessing hath been given, let them begin Lauds. This order for the Night-Offices is always to be observed on Sunday, alike in summer and in winter, unless perchance (which God forbid) they rise too late, in which case the lessons or responsories must be somewhat shortened.* Let all care, however, be taken that this do not happen; but if it should, let him, through whose neglect it hath come to pass, make satisfaction for it in the oratory.

Saint Benedict so arranges the summit of the Night Office that the Holy Gospel is preceded and followed by a hymn of praise. The Te Deum comes immediately before the Gospel. The community respond Amen to the singing of the Gospel and, straightaway, this Amen blossoms into another hymn of praise and adoration, the Te Decet Laus. This liturgical order reveals an immutable law of the interior life. Nothing so dilates the heart as does the praise of God. Nothing so prepares the heart to hear the Word of God as does the praise of God.

But he that received the seed upon good ground, is he that heareth the word, and understandeth, and beareth fruit, and yieldeth the one an hundredfold, and another sixty, and another thirty. (Matthew 13:23)

The soul preoccupied with herself, with her miserable vices, her fragile virtues, her woes, her feelings — in a word, with looking at herself and listening to herself — is incapable of receiving the Word of God in a way that allows it to take root in her and to bear fruit. The liturgy teaches us that, if we are to hear the Word of God rightly, we must first turn our gaze from ourselves and all our petty preoccupations and seek, as Saint Paul puts it, “the light of the knowledge of the glory of God in the face of Christ Jesus” (2 Corinthians 4:6). One cannot catch even a faint glimpse of “the light of the knowledge of the glory of God” without praising and adoring God. The soul absorbed in the praise of God no longer looks at herself nor listens to herself; she has eyes and ears only for God.

The novice or the monk who focuses on himself will become melancholic and troubled; he loses himself in self–analysis. What am I thinking? What am I feeling? How does this thing affect me? How do others see me? Such thoughts centre around I and me. Much energy is wasted in such self–absorbing ruminations. Their effect is to shrink the capacity of the soul. Self–knowledge that is lucid and honest has its place in the monastic life, but there is no place in the monastic life for morbid introspection. The monk who thinks more about himself, his feelings, his image, his needs, and all the hurts (real or imagined) that come with life in community, is like a man who closes the shutters, windows, and doors of his house, draws the blinds and curtains, and then ruminates his misery, in a room deprived of light and fresh air.

When tempted to morbid introspection, begin to praise God. Even if, at first, your praise of God seems forced, persevere in praising Him. The act of praise begins not in sentiment, but in the will. Praise mingled with tears is an acceptable sacrifice. The praise that rises from an afflicted heart or from a place of darkness is doubly precious because it is disinterested and gratuituous. God is worthy of praise at every moment and in all circumstances.

We praise Thee, we bless Thee, we adore Thee, we glorify Thee, we give Thee thanks for Thy great glory, O Lord God, heavenly King, God the Father Almighty.

The monk who gives himself over to the praise and adoration of God, throws open all the doors and windows of his life to the deifying light that shines from Face of Christ. He allows the cleansing wind of the Holy Ghost to blow through his life. And he begins to hear the Word of God rightly. This is what we learn from the place of the Te Deum and the Te Decet Laus in the Night Office.