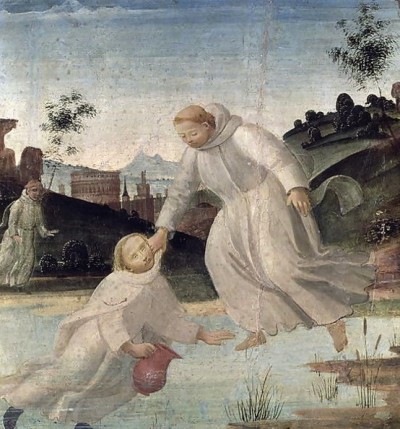 Maurus Rescues Placid from the Waters
In Chapter VII of the Second Book of the Dialogues, Saint Gregory the Great recounts the most famous episode in the life of Saint Maurus, the one that, in fact, inspires the choice of texts for the Mass and Office of his feast:

On a certain day, as venerable Benedict was, in his cell, the foresaid young Placidus, the holy man’s monk, went out to take up water at the lake, and putting down his pail carelessly, fell in himself after it, whom the water forthwith carried away from the land so far as one may shoot an arrow. The man of God, being in his cell, by and by knew this, and called in haste for Maurus, saying: “Brother Maurus, run as fast as you can, for Placidus, that went to the lake to fetch water, is fallen in, and is carried a good way off.”

A strange thing, and since the time of Peter the Apostle never heard of! Maurus, begging his father’s blessing, and departing in all haste at his commandment, ran to that place upon the water, to which the young lad was carried by force thereof, thinking that he had all that while gone upon the land: and taking fast hold of him by the hair of his head, in all haste he returned back again: and so soon as he was at land, coming to himself he looked behind him, and then knew very well that he had before run upon the water: and that which before he durst not have presumed, being now done and past, he both marvelled, and was afraid at that which he had done.

Coming back to the father, and telling him what had happened, the venerable man did not attribute this to his own merits, but to the obedience of Maurus: but Maurus on the contrary, said that it was done only upon his commandment, and that he had nothing to do in that miracle, not knowing at that time what he did. But the friendly contention proceeding of mutual humility, the young youth himself that was saved from drowning did determine: for he said that he saw when he was drawn out of the water the Abbot’s monastic garment upon his head, affirming that it was he that had delivered him from that great danger.

Here, then, are some of the antiphons and collect from the Office of today’s feast:

O most blessed of men! *
who, rejecting this world,
bore the yoke of the Holy Rule from tender years so lovingly;
and being made obedient even unto death,
denied himself, that he might wholly cling to Christ his Master, alleluia.

At Lauds and at the Hours

1. The blessed Maurus, *
born of a renowned and humble house,
from his boyhood esteemed the sufferings of Christ
greater riches than the treasures of the world.

2. Upheld by wings of obedience, *
he walked upon the waters;
and borne by the Spirit of God,
he was saved from sinking in the flood.

3. The blessed Maurus, *
a disciple of holy Benedict from tender years,
stood forth as a zealous follower of his master’s excellence.

4. From the house of prayer, *he passed over unto the place of the wondrous tabernacle,
even unto the house of God,
with exceeding love of whom he burned.

5. He was chosen *
by the Lord to be an example to the cloistered,
and a chief observor of the Holy Rule.

O God, who for a pattern of obedience
didst cause blessed Maurus to walk dry–shod upon the waters;
grant that we may both follow perfectly the example of his virtues,
and also be worthy to share in his reward.

Today holy Maurus, * lying upon a goat–skin, died happily before the altar;
today the first–begotten disciple of blessed Benedict,
through the guiding of the Holy Rule,
came up to Christ, rising untroubled, accompanied by choirs of angels;
today the obedient man, telling his victories,
was worthy to be crowned by the Lord, alleluia.