Skip to content
HomeAdvent 2015Loreto: A Place and a Grace 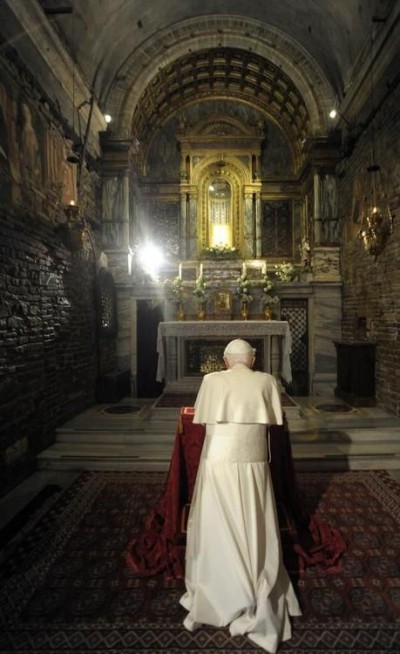 Pope Benedict XVI preached at Loreto on 4 October 2012. On this feast of the Holy House of the Incarnation, Pope Benedict’s words invite us to make a spiritual Advent pilgrimage to Loreto. The grace of Loreto is not far away:

It is not above thy reach, it is not beyond thy compass . . . . It is not a secret laid up in heaven, that thou must needs find someone to scale heaven and bring it down to thee before thou canst hear what it is, and obey it. It is not an art, practised far overseas, that thou must wait for some one to go voyaging and bring it back to thee before thou canst learn to live by it. No, this message of mine is close to thy side; it rises to thy lips, it is printed on thy memory (Deuteronomy 30:11–14)

Attend the School of Mary
It is precisely here at Loreto that we have the opportunity to attend the school of Mary who was called “blessed” because she “believed” (Lk 1:45). This Shrine, built around her earthly home, preserves the memory of the moment when the angel of Lord came to Mary with the great announcement of the Incarnation, and she gave her reply. This humble home is a physical, tangible witness to the greatest event in our history, the Incarnation; the Word became flesh and Mary, the handmaid of the Lord, is the privileged channel through which God came to dwell among us (cf. Jn 1:14). Mary offered her very body; she placed her entire being at the disposal of God’s will, becoming the “place” of his presence, a “place” of dwelling for the Son of God. We are reminded here of the words of the Psalm with which, according to the Letter to the Hebrews, Christ began his earthly life, saying to the Father, “Sacrifices and offering you have not desired, but you have prepared a body for me… Behold, I have come to do your will, O God” (10:5,7). To the Angel who reveals God’s plan for her, Mary replies in similar words: “Behold, I am the handmaid of the Lord; let it be done to me according to your word” (Lk 1:38). The will of Mary coincides with the will of the Son in the Father’s unique project of love and, in her, heaven and earth are united, God the Creator is united to his creature. God becomes man, and Mary becomes a “living house” for the Lord, a temple where the Most High dwells.

Here at Loreto fifty years ago, Blessed John XXIII issued an invitation to contemplate this mystery, to “reflect on that union of heaven and earth, which is the purpose of the Incarnation and Redemption”, and he went on to affirm that the aim of the Council itself was to spread ever wider the beneficent impact of the Incarnation and Redemption on all spheres of life (cf. AAS 54 [1962], 724). This invitation resounds today with particular urgency. In the present crisis affecting not only the economy but also many sectors of society, the Incarnation of the Son of God speaks to us of how important man is to God, and God to man. Without God, man ultimately chooses selfishness over solidarity and love, material things over values, having over being. We must return to God, so that man may return to being man. With God, even in difficult times or moments of crisis, there is always a horizon of hope: the Incarnation tells us that we are never alone, that God has come to humanity and that he accompanies us.

Mary Opens to Us the Door to Her Home
The idea of the Son of God dwelling in the “living house”, the temple which is Mary, leads us to another thought: we must recognize that where God dwells, all are “at home”; wherever Christ dwells, his brothers and sisters are no longer strangers. Mary, who is the Mother of Christ, is also our mother, and she opens to us the door to her home, she helps us enter into the will of her Son. So it is faith which gives us a home in this world, which brings us together in one family and which makes all of us brothers and sisters. As we contemplate Mary, we must ask if we too wish to be open to the Lord, if we wish to offer our life as his dwelling place; or if we are afraid that the presence of God may somehow place limits on our freedom, if we wish to set aside a part of our life in such a way that it belongs only to us. Yet it is precisely God who liberates our liberty, he frees it from being closed in on itself, from the thirst for power, possessions, and domination; he opens it up to the dimension which completely fulfils it: the gift of self, of love, which in turn becomes service and sharing.

Always on the Way to Another Dwelling
Faith lets us reside, or dwell, but it also lets us walk on the path of life. The Holy House of Loreto contains an important teaching in this respect as well. Its location on a street is well known. At first this might seem strange: after all, a house and a street appear mutually exclusive. In reality, it is precisely here that an unusual message about this House has been preserved. It is not a private house, nor does it belong to a single person or a single family, rather it is an abode open to everyone placed, as it were, on our street. So here in Loreto we find a house which lets us stay, or dwell, and which at the same time lets us continue, or journey, and reminds us that we are pilgrims, that we must always be on the way to another dwelling, towards our final home, the Eternal City, the dwelling place of God and the people he has redeemed (cf. Rev 21:3).

The “Yes” of the Virgin
There is one more important point in the Gospel account of the Annunciation which I would like to underline, one which never fails to strike us: God asks for mankind’s “yes”; he has created a free partner in dialogue, from whom he requests a reply in complete liberty. In one of his most celebrated sermons, Saint Bernard of Clairvaux “recreates”, as it were, the scene where God and humanity wait for Mary to say “yes”. Turning to her he begs: “The angel awaits your response, as he must now return to the One who sent him… O Lady, give that reply which the earth, the underworld and the very heavens await. Just as the King and Lord of all wished to behold your beauty, in the same way he earnestly desires your word of consent… Arise, run, open up! Arise with faith, run with your devotion, open up with your consent!” (In laudibus Virginis Matris, Hom. IV,8: Opera omnia, Edit. Cisterc. 4, 1966, p.53f). God asks for Mary’s free consent that he may become man. To be sure, the “yes” of the Virgin is the fruit of divine grace. But grace does not eliminate freedom; on the contrary it creates and sustains it. Faith removes nothing from the human creature, rather it permits his full and final realization.