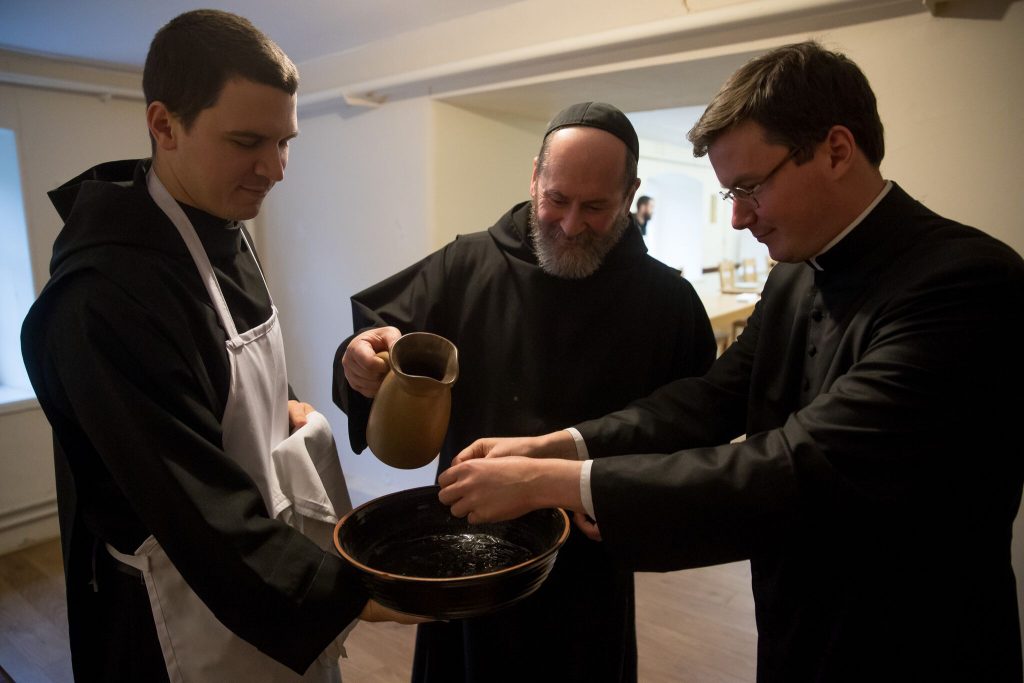 CHAPTER LIII. Of receiving Guests
5 Apr. 5 Aug. 5 Dec.
Let the kitchen for the Abbot and guests be apart by itself; so that strangers, who are never wanting in a monastery, may not disturb the brethren by coming at unlooked-for hours. Let two brothers, who are well able to fulfil the duty, be placed in this kitchen for a year; and let help be afforded them as they require it, so that they may serve without murmuring. When they have not much to occupy them there, let them go forth to other work, wherever they may be bidden. And not only with regard to them, but in all the offices of the Monastery, let there be such consideration shewn, that when there is need of help it may be given them; and that when they are without work, they do whatever they are commanded. Let the care of the guest-house, also, be entrusted to a brother whose soul is possessed with the fear of God: let there be sufficient beds prepared there and let the house of God be wisely governed by prudent men. Let no one, except he be bidden, on any account associate or converse with the guests. But if he chance to meet or to see them, after humbly saluting them, as we have said, and asking their blessing,* let him pass on, saying that he is not permitted to talk with a guest.

Our father Saint Benedict is a practical man. He arranges all things with a view to facilitating the tasks of the brethren “that there be no murmuring among them” (Chapter XL); “to prevent them either from being idle, or from being so oppressed by excessive labour as to be driven away” (Chapter XLVIII); and “that no one may be troubled nor grieved in the house of God” (Chapter XXXI). Today, in treating of hospitality, Saint Benedict provides for a special kitchen apart by itself for the abbot and guests, “so that strangers, who are never wanting in a monastery, may not disturb the brethren by coming at unlooked-for hours” (Chapter LIII). The guestmaster must accept surprises, delays, and inconveniences with equanimity. He is often obliged to think on his feet. The guestmaster is, as Saint Benedict, speaking from experience, says, often summoned to attend to visitors at unlooked–for hours. Guests frequently arrive unannounced, calling the guestmaster away from his reading, his prayer, his work, or his rest. Passing guests can require a considerable investment of time. The guestmaster, and often the porter, are obliged to smile winsomely, to be unfailingly gracious, to show patience in answering questions, and to make guests and visitors feel expected and warmly welcomed, even when they arrive at inconvenient times.

In our present arrangement, we have but one guestmaster. Dom Cassian is charged not only with welcoming and attending to retreatants staying in the guesthouse, but also with greeting and welcoming passing visitors. This obliges the guestmaster, at times, to forsake his thanksgiving after Holy Communion, or to sacrifice a part of the time reserved for lectio divina. The guestmaster needs, on such occasions, to heed the counsels of Saint Vincent de Paul:

Do not become upset or feel guilty because you interrupted your prayer to serve the poor. God is not neglected if you leave him for such service. One of God’s works is merely interrupted so that another can be carried out. So when you leave prayer to serve some poor person, remember that this very service is performed for God.

The guestmaster will often need help in cleaning and making up rooms. This sort of work must be done well in advance so that there is no stressful racing against the clock to prepare a room in time for a guest’s arrival. The guestmaster, like every other brother in the work assigned him, must be humble and prudent enough to ask for help whenever a task seems to exceed his strength, or requires more than one pair of hands. There is no virtue in attempting, while murmuring inwardly, to carry out a task alone that could be more cheerfully and peacefully completed with the help of one or more brothers.

It may happen, although this is unlikely, that the guestmaster find himself free on a certain day: the guesthouse correspondence is up to date; all the rooms are clean and ready; the arrivals and departures of guests are all arranged. On such a day — should such a day ever occur — the guestmaster will go to the brother in charge of work and offer his services or, if he judges it necessary, he may go to the abbot and ask for permission to spend the day reading, praying, and walking outdoors. The guestmaster, more than anyone else, needs always to look to his own soul, lest in his zeal for the work of hospitality, he lose sight of that for which he came to the monastery, and hear Our Lord say to him what he said once to Martha of Bethany: “Martha, Martha, thou art careful, and art troubled about many things: But one thing is necessary. Mary hath chosen the best part, which shall not be taken away from her” (Luke 10:41–42).

My desire is, as soon as possible, to appoint a helper to the guestmaster to replace the guestmaster when he is absent or impaired from carrying out his work, and also to give the guestmaster one day a week free from all duties related to hospitality. No brother is expected to work for weeks and months on end without ever having a day of quies, especially when his work obliges him to have contact with outsiders, or is particularly stressful in nature.

The guestmaster is to be a “brother whose soul is possessed with the fear of God”. He is to cultivate awareness of the presence of God and radiate a spirit of recollection and of joy. He is to carry out his work wisely, acting and speaking with prudence. More often than not the reputation of the whole community rests on the impression made by the guestmaster, the porter, and the sacristan who looks after visiting priests.

In the last sentences of this chapter, Saint Benedict treats of certain principles of monastic enclosure. No one, unless he be so bidden, is permitted, on any account, to associate or converse with visitors and guests. Saint Benedict says clearly: “But if he chance to meet or to see them, after humbly saluting them, as we have said, and asking their blessing, let him pass on, saying that he is not permitted to talk with a guest.” Conversation with visitors and guests is the duty of the guestmaster, the porter, the sacristan, and the abbot. It is not permitted to go to the gatehouse or to the guesthouse kitchen to converse with visitors and guests, unless enjoined to do so by the abbot. Similarly, when the abbot and guestmaster greet guests after the meal outside the refectory, the brother who passes by ought to smile graciously, bow slightly, and pass on, unless the abbot or guestmaster judge it suitable to introduce him to the guests and invite him to say a few words.