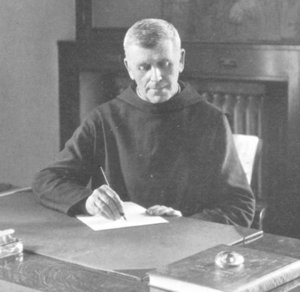 A Friend in Heaven
December 16th, is the dies natalis (heavenly birthday) of the Servant of God, Father Lukas Etlin, O.S.B., a monk of Conception Abbey. In 2008 I made a novena to Father Lukas beginning on November 16th. On the evening of the  feast of the Immaculate Conception, 8 December 2008, I was given a picture of Father Lukas. I slipped it into the pocket of my habit before driving home. Less than fifteen minutes later I was the astonished and grateful survivor of a terrible automobile crash. No bumps, bruises, scratches, aches, or pains.

From Switzerland to Missouri
Father Lukas was born Alfred Etlin, on February 25, 1864 in Sarnen, the capital of Canton Obwalden in the foothills of the Swiss Alps. In 1886 young Alfred left the natural beauty of his homeland for the new monastery founded by Abbot Frowin Conrad in Conception, Missouri. Clothed in the Benedictine habit, Alfred became Frater Lukas. He made monastic profession on November 13, 1887 and was ordained a priest on the feast of the Assumption, August 15, 1891. He offered his First Mass at the Benedictine Convent of Perpetual Adoration in Clyde, Missouri on the Feast of Saint Bernard, August 20, 1891.

Artist
After his ordination, Father Lukas, a gifted artist, was assigned to continue his collaboration in the decoration of the abbey church. Some of the magnificent frescoes that still adorn the basilica of Conception Abbey are the work of Father Lukas.

Chaplain
On March 17, 1892, Father Lukas was named chaplain to the Benedictine Sisters at Clyde, Missouri. For some time he walked two miles each way to offer daily Mass at the convent. After being caught in dangerous snow storm, Abbot Frowin and the Mother Prioress of Clyde decided that Father Lukas should reside at the convent.

Apostle of the Eucharist
It was there that Father Lukas grew in his already burning love for the Heart of Jesus, for the Most Holy Eucharist, and for the Mother of God, and began to share the fruits of his contemplation He was instrumental in persuading the Sisters at Clyde to embrace a more monastic way of life with primacy given to the worthy celebration of the Divine Office and to perpetual adoration of the Blessed Sacrament. In May 1905 he launched his printing apostolate with the publication of Tabernacle and Purgatory. Its aim was clear: “that the knowledge of the Most Holy Eucharist may be increased and the love toward It enkindled more and more in the hearts of the faithful.” Father Lukas’ personal life was marked by long periods of Eucharistic adoration, both by day and by night.

Devotion to the Blessed Virgin Mary
In his office, Father Lukas worked in the presence of an almost lifesize painting of Our Lady holding the Child Jesus, Who is pointing to His Heart. Often Father Lukas would pray aloud, addressing the Mother of God. He would kneel before her image to ask for guidance, and kiss it with tender devotion.

One-Man Relief Program
With the onset of World War I, Father Lukas became the Apostle of Charity. Alarmed by the famine that afflicted Europe after the armistice in 1918, he launched a one-man relief program, and distributed hundreds of thousands of dollars, solicited from among his American readers of Tabernacle and Purgatory, to monasteries, convents, seminaries, orphanages, and schools. He called his program, Caritas.. By his death in December 1927, Father Lukas had collected and disbursed over two million dollars to institutions in thirty-two countries, including Russia and China.

Priest-Adorer
In his spiritual conferences to the Benedictine Sisters at Clyde, Father Lukas insisted on the Most Holy Eucharist as the heart of the Christian and monastic life. This was the fruit of his own experience. He invited them to enter into the mystery of the Holy Sacrifice by offering themselves to the Father, per ipsum, et cum ipso, et in ipso — through Christ, with Him, and in Him. The perpetual adoration of the Most Blessed Sacrament was, for Father Lukas, intrinsically linked to the Holy Sacrifice. He was, before all else, a faithful priest-adorer of Christ present in the Sacrament of His Love.

Zeal for the Liturgy
Gifted with a refined artistic sensibility, Father Lukas made himself the zealous promoter of Gregorian Chant in the liturgy. He saw to it that the Sisters at Clyde were well prepared to sing the Mass and Divine Office with dignity and beauty.

Death on a Highway
On December 16, 1927, Father Lukas offered Mass at the convent in Clyde, and at 8:30 a.m. taught a religion class to the girls of St. Joseph’s Academy. Among other things, he said to them:

We must at all times be ready to die. We should not wish to live even a single day longer than God wills. Should death overtake us in an automobile, also then we should accept it with resignation to the will of God.

Eight hours later, Father Lukas lay dead at the side of the highway in Stanberry, Missouri, the victim of an automobile accident. At the moment of the crash, he was heard to cry out, “O Jesus, Jesus!” When help came, Father Lukas was already dead, with a piece of his rosary held fast in his hand.

Father Lukas, An Intercessor
Since his death, Father Lukas has obtained numerous graces and favours for those who have recourse to his intercession.

Prayer
O God, who didst bestow upon Thy faithful servant, Father Lukas Etlin, a tender love for the Virgin Mother of Thine Only–Begotten Son and a most fervent zeal for the adoration of the Sacrament of His Holy Body and Blood, grant us, we beseech Thee, through the prayers of Father Lukas, the grace that we now implore of Thy merciful goodness. [Intention] Deign, in this way, to manifest, for the joy and consolation of Thy Church, that even as Father Lukas pleased Thee by the virtues of his monastic and priestly life on earth, so now does his intercession win Thy favour in heaven. Through Christ our Lord. Amen.