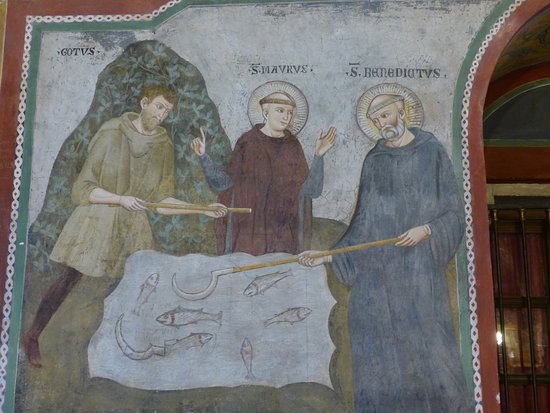 12 Jan. 13 May. 12 Sept.
Let him make no distinction of persons in the monastery. Let not one be loved more than another, unless he be found to excel in good works or in obedience. Let not one of noble birth be put before him that was formerly a slave, unless some other reasonable cause exist for it. But if upon just consideration it should so seem good to the Abbot, let him arrange as he please concerning the place of any one whomsoever; but, otherwise, let them keep their own places; because, whether bond or free, we are all one in Christ, and bear an equal rank in the service of one Lord, “For with God there is no respecting of persons.” Only for one reason are we preferred in His sight, if we be found to surpass others in good works and in humility. Let the Abbot, then, shew equal love to all, and let the same discipline be imposed upon all according to their deserts.

Even in Saint Benedict’s time, monastic families were made up of persons coming from different backgrounds, various cultures, and diverse origins. We have only to think of the hapless Goth in Chapter VI of Saint Gregory’s Second Book of the Dialogues:

At another time, a certain Goth, poor of spirit, that gave over the world, was received by the man of God; whom on a day he commanded to take a billhook, and to cleanse a certain plot of ground from briers, for the making of a garden, which ground was by the side of a lake. The Goth as he was there laboring, by chance the head of the billhook slipped off, and fell into the water, which was so deep, that there was no hope ever to get it again. The poor Goth, in great fear, ran to Maurus and told him what he had lost, confessing his own fault and negligence: Maurus forthwith went to the servant of God, giving him to understand thereof, who came immediately to the lake: and took the handle out of the Goth’s hand, and put it into the water, and the iron head by and by ascended from the bottom and entered again into the handle of the billhook, which he delivered to the Goth, saying: “Behold here is thy billhook again, work on, and be sad no more.”

The Goths were an Eastern Germanic pagan people converted to Arian Christianity in the 4th century; by Saint Benedict’s time the Goths were beginning to transform the ancient Roman world. One can only imagine the cultural differences that separated the Goth brother from Maurus and Placid, both sons of the Roman nobility. Learning to live together in humility and charity was no less challenging in Saint Benedict’s day than in our own. One begins to understand why Saint Benedict was compelled to write Chapter LXXI of the Holy Rule:

Not only is the excellence of obedience to be shewn by all to the Abbot, but the brethren must also obey one another, knowing that by this path of obedience they shall come unto God. The commands, then, of the Abbot or the Superiors appointed by him (to which we allow no private orders to be preferred) having the first place, let all the younger brethren obey their elders with all charity and vigilance.

By reason of social background, education, and cultural sensibility, Saint Benedict would have felt closer to the likes of Maurus and Placid that to the Goth brother of whom Saint Gregory does not even give the name. One begins to understand the implications of what Saint Benedict requires of an abbot:

Let him make no distinction of persons in the monastery. Let not one be loved more than another, unless he be found to excel in good works or in obedience. Let not one of noble birth be put before him that was formerly a slave, unless some other reasonable cause exist for it.

It is interesting to note that when the Goth brother lost the head of his billhook, he ran to Brother Maurus to confess his fault. Brother Maurus must have received his Goth brother sympathetically, because he forthwith went to Saint Benedict and told him of the mishap. Saint Benedict did not discount the poor Goth’s distress. Instead, Saint Gregory tells us, the vir Domini Benedictus, Benedict, the man of the Lord, left what he was doing, and went personally to the lakeside, took the handle out of the Goth’s hand, and put it into the water. The iron head floated up from the bottom and re–attached itself into the handle of the billhook. The Goth must have been wide–eyed. The most telling part of the story is what Saint Benedict said to the Goth brother:  Ecce, labora, et noli contristari, “Behold, work on, and be sad no more.” An abbot must memorise these words of Saint Benedict and, in time of temptation, struggle, or discouragement, repeat them to his sons: Ecce, labora, et noli contristari.

It is normal that during his noviceship, and in the first years of his monastic journey, a brother should struggle with renouncing his own will in order to practice obedience to the abbot and the brethren alike, knowing that by this path of obedience he shall make his way to God. Saint Benedict repeats in Chapter LXXI what he says in the Prologue: obedience is the path of our return to God. All our struggles with obedience come from pride. The prideful man holds to his own way of thinking; he wants things done in a certain way — his own way — and he has little patience with those who think and act differently from himself. He may become angry, or sad, or be tempted to withdraw from communication with the abbot or from the circle of fraternal life; all of these reactions are the symptoms of the underlying spiritual pathology of pride.

When I see a brother angry, or sad, or tempted to isolate himself, I can do one or more things to help him emerge from his difficulty. I can reach out to him myself with words of comfort or encouragement, or with words of warning and rebuke; or I can send another father or brother to console him. In some cases, it may be necessary for me to change a brother’s obedience, but I will not do this too easily, for it may deprive the troubled brother of an opportunity to practise humility and so draw down upon himself divine grace. The answer to every difficulty is not to remove a a brother from the difficulty, but to keep him in it until, by the prayers of the abbot and community, and by the grace of Our Lord, the troubled brother comes to see that the source of the difficulty lies in his pride and its solution lies in humility and obedience. The abbot may need to go to the brother in his place of work, just as Saint Benedict went to the Goth at the lakeside, and praying for him, say, Ecce, labora, et noli contristari, “There now, get on it with it, and do not let sadness get a grip on you.”