Skip to content
HomeJulien GreenFriends in Heaven and on Earth

Yvonne-Aimée Makes Herself Known
It was July 9, 1956. Someone entered the life of Julian Green (1900-1998) in a most unforeseeable way. Green’s sister Anne, who had remained in Paris and was to join him in Mareil (Seine-et-Oise) a few days later, arrived in Mareil, bringing with her an article by Colonel Rémy that she had torn out of a magazine picked up in her hairdresser’s. The article was about the Augustinian of Malestroit, Mother Yvonne-Aimée de Jésus (1901-1951). Mother Yvonne-Aimée had died only a few years earlier in 1951 after a lifetime of extraordinary love: Jesus’ love for her, and hers for Him. Her life was marked as well by charismatic manifestations of all sorts, including the stigmata and, alas, by frightful persecutions and assaults from below.

A Connection|
What most fascinated Julian Green about Mother Yvonne-Aimée was that, for twenty years, she was directed by the Jesuit Father Crété, the same priest who prepared him for reception into the Catholic Church at the age of fifteen, and wanted to see him become a Benedictine monk in the Isle of Wight. Green never really got over the bitter disappointment he caused Father Crété by not leaving the world for the cloister. Discovering the close bond between Father Crété and Mother Yvonne-Aimée, and the prodigies and signs wrought by God through her, Julian Green had an inner certitude that Father Crété had asked the holy nun of Malestroit to pray very specially for him.

When a Saint Takes an Interest in a Soul 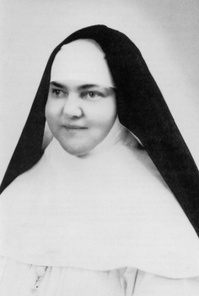 The fact that Mother Yvonne-Aimée, of whom he knew nothing previously, entered his life, in this way, at a time when he was experiencing an compelling spiritual tension in his life, convinced Julian Green of the grace of her intercession for him. Yvonne-Aimée pursued him into his desert. She made herself known to him in order to help him break free of the bonds of sin that, for so long, had held him enslaved in a moral torment. Julian Green began to pray to her, and in his absolute break with a sinful past, recognized the proof of her action.

Chastity and Charity
Julian Green always secretly longed for holiness. He knew, all the same, that “one is not necessarily holy because one is chaste.” He recalled the line of the old poet William Langland that, “chastity without charity is enchained in the very pit of hell.” For Green, charity was everything. “God,” he said, “has given us but one heart only to love him and to love men.” Julian Green desired chastity because, almost without being able to articulate it, he wanted to be a saint. And he wanted to love as God would have him love.