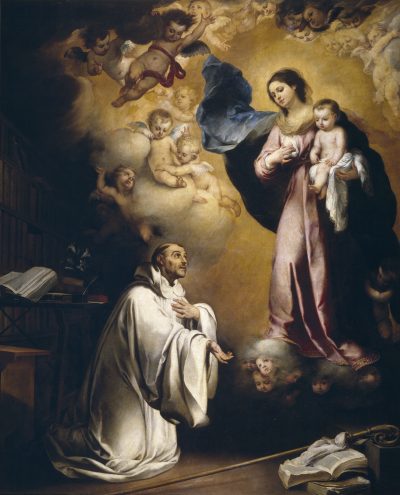 26 Jan. 27 May. 26 Sept.
The first degree of humility, then, is that a man, always keeping the fear of God before his eyes, avoid all forgetfulness; and that he be ever mindful of all that God hath commanded, bethinking himself that those who despise God will be consumed in hell for their sins, and that life everlasting is prepared for them that fear Him. And keeping himself at all times from sin and vice, whether of the thoughts, the tongue, the hands, the feet, or his own will, let him thus hasten to cut off the desires of the flesh.

In yesterday’s appointed portion of Chapter VII, Saint Benedict gave singular importance to Psalm 130 with its image of a little child on its mother’s breast. Spiritual childhood is a Marian grace; one who abandons himself unconditionally to the maternal heart of the Blessed Virgin Mary will be converted and become as a little child.

Amen I say to you, unless you be converted, and become as little children, you shall not enter into the kingdom of heaven. (Matthew 18:3)

The man who opens his life to the Blessed Virgin Mary must be prepared to change. The one grace that Our Lady always communicates to those abandon themselves to her is a conversion to lowliness of heart. There are two sorts of monks who need Mary in their life: the ones who appear to go from strength to strength, and the ones who appear to go from struggle to struggle.

First, the man who appears to go from strength to strength: he may have a penetrating intelligence, an indomitable strength of will, and a physical resistance equal to every adversity, and yet remain strangely impenetrable to grace. Why? What is missing? A monk may be outwardly observant; he may surpass all his brothers in austerity, in self–discipline, and in rubrical exactitude; still, if he does not become as a little child, he will not enter the kingdom of heaven. Such a man’s apparent record of success may well be the very thing that is keeping him from growth in holiness. There is no growth in holiness without growth in humility, and no growth in humility without becoming Mary’s little child. Without attempting to analyse here just why this is so, I can affirm that spiritual childhood and growth in humility are somehow bound up with saying the Rosary.

Second, the man who appears to go from struggle to struggle: I have known men to wrestle for years, and even for decades, against certain sins without being able to emerge from them. The reason is simple: a man’s openness to grace is directly proportionate to the degree of his humility. Our Lord may allow a man to suffer one defeat after another; he may allow a man to fail repeatedly, and to fall hard and low. It sometimes happens that, even after experiences that are, by any standard, painful and humiliating, a man persists in being self–reliant and, therefore, resistant to grace. For such a man there is but one way of breaking the cycle of sin: he has to become Mary’s little child. Again, without attempting to analyse just why this is so, I can affirm that spiritual childhood and liberation from from certain engrained habits of sin are somehow bound up with saying the Rosary. Father Cajetan Sheehan, O.P. (1903–1997) used to comfort his woeful young penitents by asking, “Do you say the Rosary, son?” From the other side of the confessional a choked voice would stammer, “I do, Father”. To which the wise old Dominican would invariably respond, “Ah, then you’ll be alright”. The Rosary is somehow incompatible with pride

Today, Saint Benedict invites us to make a beginning in humility. The monk whose life corresponds to the first degree of humility lives with the Blessed Virgin Mary and, by praying the mysteries of her Rosary, learns always to keep the fear of God before his eyes. At no moment in her life did the Blessed Virgin Mary lose sight of the holiness of God. Never was she forgetful of the presence of God. Mary, whom the Greeks call the Παναγία (the All–Holy), and whom we call the Tota Pulchra (the All Lovely One) and the Immaculata (the Spotless One), kept herself , as Saint Benedict says,”at all times from sin and vice, whether of the thoughts, the tongue, the hands, the feet, or her own will”. Never did Mary, like old Eve in her foolishness and shame, attempt to hide herself from the face of God among the trees of the garden. This is the deepest meaning of the feast of her Presentation in the Temple on November 21st. Being conceived immaculate and full of grace, Our Lady lived, and moved, and had her being in God and πρὸς τὸν Θεόν (turned towards God, cf. John 1:1). At every moment of her earthly journey, the Blessed Virgin Mary held herself in state of complete readiness for the unfolding of God’s will, and this until, at the hour of her Assumption, she heard the summons into glory:

Behold my beloved speaketh to me: Arise, make haste, my love, my dove, my beautiful one, and come. For winter is now past, the rain is over and gone. The flowers have appeared in our land, the time of pruning is come: the voice of the turtle is heard in our land: The fig tree hath put forth her green figs: the vines in flower yield their sweet smell. Arise, my love, my beautiful one, and come. (Canticle 2:10–13)

All of this goes to the heart of what we mean when we speak of perpetual adoration: it is an expression of ceaseless desire for the presence of God, a seeking after the face of God in all the circumstances of life. Mother Mectilde writes that, “the same God whom we adore in the Most Holy Sacrament is always present to us in every place”. The man who lives in the presence of the thrice–holy God begins, already here below, to sing with the Angels a ceaseless Sanctus, Sanctus, Sanctus in his heart. Like Jacob waking from sleep, he looks around him [as Saint Benedict will say in the twelfth degree of humility] “in the oratory, in the monastery, in the garden, on the road, in the field or wherever he may be”, and confesses, “Indeed the Lord is in this place, and I knew it not” (Genesis 28:16). In her famous Epiphany Conference of 1694, Mother Mectilde wrote

To adore continually it is not necessary to say, “My God, I adore Thee.” It is enough to tend inwardly to God [who is] present, to maintain a profound respect out of reverence for His greatness, believing that He is in us as He truly is. In fact, the Most Holy Trinity dwells in us: the Father acts and operates there with His power, the Son with His wisdom, and the Holy Ghost with His goodness. It is, therefore, in the intimacy of your soul, where the God of majesty abides, that you must adore Him continually. From time to time, place your hand over your heart, saying to yourself: “God is in me. And He is there not only to sustain my physical life, as in irrational creatures, but He is there acting and operating, to raise me to the highest perfection, if I do not put obstacles in the way of His grace.”

In a certain sense, habitual attention to the presence of God, perpetual adoration of the Most Blessed Sacrament, and the practice of the first degree of humility are all three closely inter–related. The man who is mindful of the presence of God everywhere will be moved frequently to seek Him veiled in the Most Holy Sacrament, for there the presence of Our Lord takes on an immediacy that, even in the obscurity of faith, illumines and warms the soul. The man who, adoring, exposes himself to the Host will begin to love the humility of the Host and, over time, the humility of the Host will impress itself in his soul.