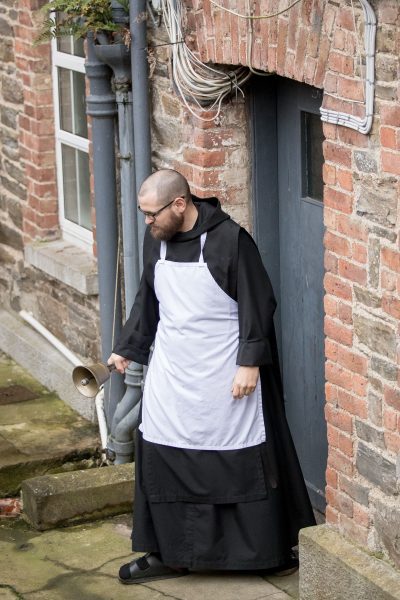 The brother newly–come to the cloister is not left to himself. He is placed in the care of a senior who is skilled in winning souls. This senior will be a God–seeking man whose life is, first of all, marked by zeal for the Opus Dei, by submission in obedience, and by patience in humiliations. He will be a veteran of the spiritual combat, a man who has walked, and still walks, the hard and rugged paths of the via crucis. He will be a man, familiar with weakness and confident in the power of the grace of Christ, who can say with the Apostle:

The senior charged with the novices must be skilled in winning souls; he must, in a word, cultivate the virtue of winsomeness. Winsomeness has to do with being gracious and childlike; joyful and capable of presenting things in an attractive way; without guile and welcoming; fatherly and inspiring confidence. He is all of these things in such wise that the souls in his care are drawn not to himself, but to Christ. In this, his model is Saint John the Forerunner, the friend of the Bridegroom.

John answered and said: A man cannot receive any thing, unless it be given him from heaven. You yourselves do bear me witness, that I said, that I am not Christ, but that I am sent before him. He that hath the bride, is the bridegroom: but the friend of the bridegroom, who standeth and heareth him, rejoiceth with joy because of the bridegroom’s voice. This my joy therefore is fulfilled. He must increase, but I must decrease. (John 3:27–30)

The senior set over the new brothers, or Father Master as he is called, must never seek to gain the novices for himself. He is not the friend of the novices in his charge, nor is he a kind of guru surrounded by starry–eyed followers; he is the father and teacher of the novices. He must remain free to “be instant in season, out of season: reproving, entreating, rebuking in all patience and doctrine” (2 Timothy 4:2). Much is compromised when the Father Master who will have, as all men do, his own affective needs and struggles, becomes personally dependent on the affection and support of a novice, or when a novice, still insecure in himself, and still growing up into manhood, becomes personally dependent on the approval and affection of the Father Master. The relationship of the Father Master with his novices is marked by a real fatherly love but it is not sentimental. The novice relates to his Father Master not as an equal, but as a son and as a disciple who has everything to learn.

I remain profoundly grateful for the Fathers under whom I was first introduced to the Holy Rule and to monastic life in the late 1960s and early 1970s. The first was a Vietnamese monk who, with his inimitable accent, said to me one thing that it has taken me the better part of a lifetime to understand and practice: “Brother, if you be humble, you be happiest man in town”. The second was a young Master of Novices, recently returned from studies at Sant’Anselmo in Rome. Outwardly, he was rigid and frigid. His quick nervous movements and occasional outbursts of impatience unnerved me but, once the door of his cell was closed, he became, at least for me, the kindest of fathers. His conferences, always perfectly prepared, and read from notes written with a fountain pen in his own meticulous hand, began at the stroke of the clock and ended not a minute before nor a minute after the prescribed time. This good Father’s piety inspired me; he modeled for me a certain image of Benedictine holiness to which I am still, I confess, attached. It was he who introduced me to the lives and writings of many of the models of monastic life to whom I still refer, including Dom Claude Martin, Mother Mectilde de Bar, and Abbot Guéranger.

The Father Master must, before all and above all, love Christ. Even if he is not at the required or desired level of competence in monastic scholarship and learning; even if his own life is marked by frailty and shortcomings; even if he is lacking in certain qualities or skills, if he is a man who loves Jesus, and is humble enough to sit at His feet, Our Lord will endow him with a real grace of state. Nemo dat quod non habet. No man can give what he doesn’t have. The Father Master will be intimate with the Heart of Jesus, “in whom are all the treasures of wisdom and knowledge” (Colossians 2:3).

Our Declarations describe the Father Master of Novices and his duties succinctly and clearly:

146. The Master of Novices will be chosen from among the solemnly professed priest-monks over thirty years of age. Skilled in gaining souls and possessed of the other qualities set forth in the Holy Rule, he will form the novices according to articles 147 and 148, and render account of their progress to the Prior.

147. At the end of the postulancy, the Prior, having sought the advice of the Council of Seniors, may receive the postulant as a novice, following the rite set forth in the Ceremonial. The Master of Novices will form the men entrusted to him in the human and Christian virtues. He will instruct them in the Rule of Saint Benedict and see to it that they apply themselves to the study of the Catechism of the Catholic Church, the norms of Canon Law pertaining to the religious life, the proper law of the monastery, the Psalms, and the Sacred Liturgy. He will exercise the novices in humility, forgetfulness of self, and fraternal charity.

148. Among the writings of Benedictine authors studied, those of Blessed Columba Marmion and of the Servant of God Catherine-Mectilde of the Blessed Sacrament will hold a place of choice. The Master of Novices will so encourage the men in his care to be generous in giving time to adoration of the Most Blessed Sacrament that, even in the absence of consolations, light, and visible fruits, they will persevere in prayer before the Eucharistic Face of Jesus, confident that through such trials, Our Lord is uniting them to the state of abjection, solitude, and self-emptying love that was His in the Sacrifice of the Cross, and remains His in the Most Holy Sacrament of the Altar.

Our Statutes give further precisions:

146a. The Prior may appoint a Zelator to assist the Master of Novices in his charge.

146a bis. Until such time as there are a sufficient number of solemnly professed monks, the Zelator, if needed, may be chosen from among the triennially professed.

147a. Insofar as possible, the postulants and novices will be formed in the cenobitical life in a group apart under the guidance of the Master of Novices, before being integrated into the body of the professed fathers and brothers.

In monasteries where the community is still young, being made up of monks with less than ten years of profession, the abbot himself may be obliged to assume the task of caring for the novices. This arrangement remains provisional. The implementation of the Declarations and Statutes becomes binding as soon as the abbot can identify from among his senior professed monks one to whom he can safely entrust this charge. There are examples in the not so distant monastic history of an abbot asking for a monk from another monastery to fill the role of the Master of Novices, but today, in practice, few abbots are willing to part with qualified monks, and the monks from whom abbots may be willing to part might not be the best for so important and sensitive a task.