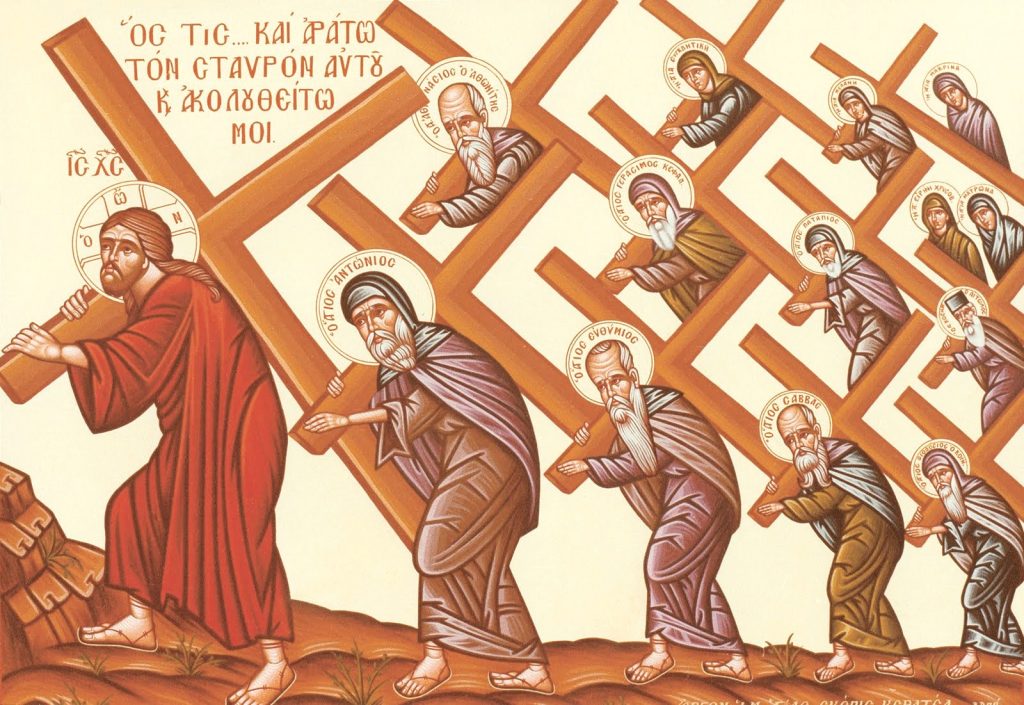 6 June. 6 Oct.
The eighth degree of humility is, for a monk to do nothing except what is authorised by the common rule of the monastery, or the example of his seniors.

The monk who is following Jesus along the via crucis will necessarily lose along the way the notion that he is somehow different from others, exceptional, and unlike anyone else. He does not want to be considered special in any way. The man who, because he believes that he is “not like the rest of men” (Luke 18:11), refuses to do things as his fathers and brothers do them, when they do them, and in the way they do them, is indulging a peculiar form of pride. Psychologists speak of the narcissistic personality disorder. Saint Benedict sees the same narcissistic manifestations as a vice. He also prescribes the remedy: “Do nothing except what is authorised by the common rule of the monastery, or the example of his seniors”.

The brother who nourishes a secret belief in his own superiority will always find opportunities to stand out, to stand apart, to preserve the little difference that reinforces this belief. The brother who cannot give up his personal way of doing things fears that, if he starts doing everything as others do, he will cease being special, and this he finds terrifying. To such a brother the abbot must repeat Saint Benedict’s injunction again and again, firmly, and with patience: “Do nothing except what is authorised by the common rule of the monastery, or the example of the seniors”.

The professed must give the example of a quiet regularity. Regularity is a harbinger of peace. Over time, a monastic family adopts certain ways of doing things. In the first twenty or twenty–five years of a monastery’s life, while the community is still building, and growing, and adjusting to local circumstances, there will inevitably be changes, corrections, and improvements. For this reason, it is not easy to compile a written book of customs. Here, however, we are getting to the point where a book of customs will have to be prepared, even if it will have to be revised again to correspond to the construction of new buildings (notably the oratory) and to the reconfiguration of existing spaces.

One cannot overestimate the importance of fostering regularity; by this, I do not mean a harsh regime that brooks no exceptions. I refer rather to the steady rhythm that can admit of the occasional exception and, without conceding to idiosyncrasies, accommodate the dispensations required by fluctuations in health, by changing circumstances, and by particular needs. Benedictine life is like the chant: regular and flowing, yet not without its rises and its falls, and even admitting of the occasional surprise or unexpected interval. The abbot is like the choirmaster trying to keep all together and to facilitate an intelligible rendering of the text and of its meaning.

Saint Thomas, in treating of law and custom, warns of the dangers of introducing change without due consideration for the consequences, and also sets out the criteria for dispensations:

To a certain extent, the mere change of law is of itself prejudicial to the common good: because custom avails much for the observance of laws, seeing that what is done contrary to general custom, even in slight matters, is looked upon as grave. Consequently, when a law is changed, the binding power of the law is diminished, in so far as custom is abolished. Wherefore human law should never be changed, unless, in some way or other, the common weal be compensated according to the extent of the harm done in this respect. (II:1, q. 97, art. 2)

He who is placed over a community is empowered to dispense in a human law that rests upon his authority, so that, when the law fails in its application to persons or circumstances, he may allow the precept of the law not to be observed. If however he grant this permission without any such reason, and of his mere will, he will be an unfaithful or an imprudent dispenser: unfaithful, if he has not the common good in view; imprudent, if he ignores the reasons for granting dispensations. (II:1, q. 97, art. 4)

The abbot must do everything he can to establish in the monastery the peace that comes from regularity. The pax benedictina that ought to characterise our life rests upon the balance and harmonisation of regularity, moderation, adaptation to changing circumstances, allowances for infirmities, and, in all things, charity. It may happen that the abbot himself, especially if he is older, finds himself unable to give an example of perfect observance. Like anyone else, the abbot will suffer infirmities and fatigue; these may be exacerbated by the burdens of his office. It is striking that, when one studies the history of many monasteries, one discovers that the beginnings are, more often than not, marked by infirmities and illness. In such instances, the abbot, without departing from the preservation of regularity in the observance, will need to provide his sons with an example of humility in weakness, patience in suffering, and joyful abandonment to Divine Providence.

The eighth degree of humility treats, effectively, of what Abbot Guéranger, in his fine little book for novices (On the Religious Life, available from St Michael’s Abbey Press) calls “the family spirit”. He wisely says:

They will never venture the least criticism of the observances, under the pretext that these are more perfect elsewhere; they will remember that they have not yet committed themselves in any way, and so are perfectly free to go wherever their fancy leads them. It it happened that some did not esteem the Order, or its spirit or its administration, they should understand straight away that they will find it impossible to develop this family spirit. It would then be a duty to withdraw, so as not to retain the externals of a life that will never  gain the allegiance of their thoughts and intentions.

The monk who aspires to be an amator loci et fratrum (a lover of the place and of the brethren) will love his monastery, his abbot, his brethren, and the observances and customs that give to his monastic family its own unique physiognomy. He will walk humbly and cheerfully in the footsteps of his fathers and brothers, renouncing his subjective preferences and  idiosyncracies, and drawing strength from the great cloud of witnesses, the monks of every age who, in following the common rule, attained an uncommon holiness.