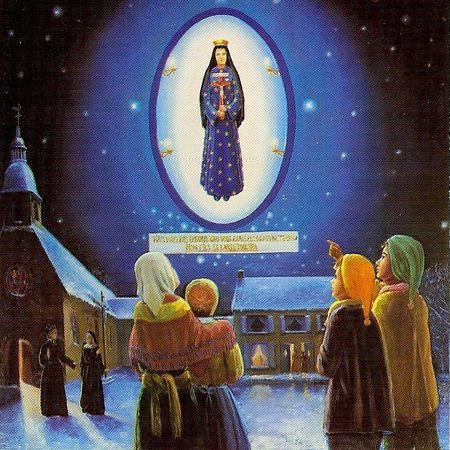 Today, January 17th, the feast of Saint Antony, is also the feast of Our Lady of Pontmain venerated under the title of Our Mother of Hope. The faithful of the Mayenne are very devoted to the Virgin of Pontmain. Pilgrimages are frequent. Pontmain remains a place of conversions and blessings. 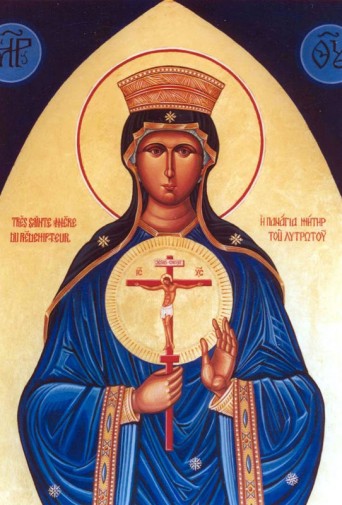 The Day the Sky Opened
In Pontmain, on January 17, 1871 it was dark and cold, much like Ireland today, and France was at war. Paris was besieged. The conquering Prussian army was at the gates of Laval. The inhabitants of Pontmain were in anguish for they were without news of their thirty-eight young men who had gone to fight in the war. That evening, Eugène Barbedette was helping his father to crush fodder in the barn. His little brother Joseph was there too. Eugène went out “to see the weather”.

A Beautiful Lady
It was then that Eugène saw above the house opposite a beautiful Lady wearing a dress covered in stars. She was looking at him and smiling. She held her arms stretched out in front of her. Villagers ran towards the barn. Other children saw the vision too. A blue oval with four candles surrounded the beautiful Lady. The Parish Priest and the Sisters from the school began prayers and hymns.

But, Pray, My Children
They said the Rosary followed by the Magnificat. Then a banner unfurled itself between the oval and the roof of the house. Letter by letter, a message was written in the sky. The children read out the words, while the crowd sang the Litanies of the Blessed Virgin Mary, the Inviolata and the Salve Regina.

“But, do pray, my children. God will answer you very soon. My Son lets His Heart be touched.”
The children’s joy was contagious. “Oh! How beautiful she is!” They sang Mother of Hope, a familiar canticle. Then, all of a sudden, the children became sad. The face of the beautiful Lady was overcome by a look of deep distress. Had she not already wept tears of motherly sorrow at Lasalette twenty–five years earlier?

Mary Shows Jesus Crucified
Before the beautiful Lady appeared a blood red crucifix. At the top of the cross, on a white crosspiece, the Name of Jesus Christ was written in red letters. At Lasalette, a quarter of a century before, the weeping Virgin displayed, on her breast, a shining crucifix. Here, at Pontmain,  the beautiful Lady grasped the crucifix in both hands and showed it to the children while a small star lit the four candles in the blue oval. Everyone prayed in silence. They sang the Ave Maris Stella. The red crucifix disappeared. The beautiful Lady extended her hands in a gesture of welcome. A small white cross appeared on each shoulder. Everyone knelt down in the snow. A white veil, like a great sheet, covered the beautiful Lady from foot to head. “It’s finished,” said the children. Eleven days later the armistice was signed. The Prussians never entered Laval.

Pilgrimages and Ecclesiastical Approval
Pilgrims to Pontmain began receiving abundant graces and favours. After suitable research and a canonical investigation, the Bishop of Laval, Monseigneur Wicart, gave his decision: “We judge that the Immaculate Virgin Mary, Mother of God, truly appeared on the 17th of January 1871, to Eugène and Joseph Barbedette, Françoise Richer and Jeanne-Marie Lebossé in the hamlet of Pontmain.”

The Marian Liturgical Patrimony of Ordinary People
One of the most remarkable things about the account of the apparition at Pontmain was the ability of the simple faithful not only to pray the Holy Rosary, but also to pray the Litanies of Our Lady, and to sing the Magnificat; the lovely prose in honour of the Immaculate Conception, the Inviolata; the Salve Regina; and the Ave Maris Stella. All of these chants belong to the rich Marian liturgical patrimony of the West. How many of them would be known to the faithful today? At Pontmain, on that cold January night in 1871, the faithful sang from the heart what their forebears had always sung. It is chants such as those intoned at Pontmain over one hundred years ago that form the Catholic faithful in a devotion to the Mother of God that is, at once, tender, reverent, and doctrinally sound.