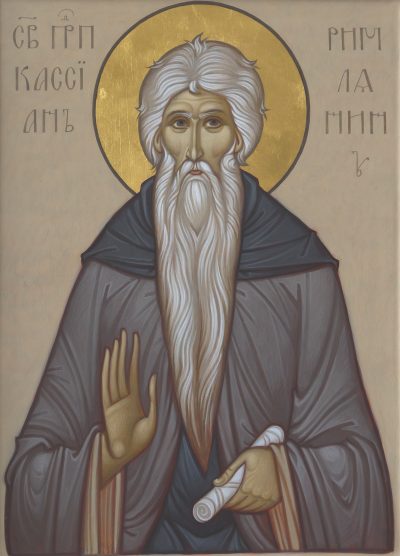 CHAPTER LXX. That no one presume to strike another
28 Apr. 28 Aug. 28 Dec.
Let every occasion of presumption be banished from the Monastery. We ordain, therefore, that no one be allowed to excommunicate or strike any of his brethren, unless authority to do so shall have been given him by the Abbot. Let such as offend herein be rebuked in the presence of all, that the rest may be struck with fear. With regard to the children, however, let them be kept by all under diligent and watchful discipline, until their fifteenth year: yet this, too, with measure and discretion. For if any one presume, without leave of the Abbot, to chastise such as are above that age, or shew undue severity even to the children, he shall be subjected to the discipline of the Rule, because it is written: “What thou wouldest not have done to thyself, do not thou to another.”

We come today to the second of four chapters (LXIX—LXXII) that treat of charity within the monastic family. Charity fosters and protects unity. Charity demands that we bear with one another’s infirmities and shortcomings, according to the injunctions of Saint Paul:

Brethren, and if a man be overtaken in any fault, you, who are spiritual, instruct such a one in the spirit of meekness, considering thyself, lest thou also be tempted. Bear ye one another’s burdens; and so you shall fulfil the law of Christ. For if any man think himself to be some thing, whereas he is nothing, he deceiveth himself. But let every one prove his own work, and so he shall have glory in himself only, and not in another. For every one shall bear his own burden. (Galatians 6:1–5)

Saint John Cassian (Conference XVI) sets forth six foundations of the unity in charity that he calls friendship:

1. The first foundation then, of true friendship consists in contempt for worldly substance and scorn for all things that we possess. For it is utterly wrong and unjustifiable if, after the vanity of the world and all that is in it has been renounced, whatever miserable furniture remains is more regarded than what is most valuable; viz., the love of a brother.

Put simply, this means that charity obliges us to put the love of the brethren above any material thing. One  may think it good to possess, or control, or arrange, or dispose of things. The brother who stands in the way of this provokes anger. It is far better to renounce one’s possession, control, arrangement, or disposition of things than to forsake charity.

2. The second is for each man so to prune his own wishes that he may not imagine himself to be a wise and experienced person, and so prefer his own opinions to those of his neighbour.

3. The third is for him to recognize that everything, even what he deems useful and necessary, must come after the blessing of love and peace.

There are monks who, once they have judged something useful and necessary, will ride roughshod over everyone and everything else in order to secure or defend this thing. Saint John Cassian says that the blessing of love and peace must be secured and defended before all else. This requires, as he teaches in the first two foundations of charity, the renunciation of things and of thoughts.

4. The fourth is for him to realize that he should never be angry for any reason good or bad.

“But, my anger is justified”, says Brother Erasmus. “I have the right to be angry over this slight, this offense, this oversight, this insult, this remark.” The psalmist says to Brother Erasmus, Désine ab ira, et derelínque furórem; noli æmulári ut malignéris, which Monsignor Knox gives as, “End thy complaints, forgo displeasure, do not fret thyself into an evil mood”.

5. The fifth is for him to try to cure any wrath which a brother may have conceived against him however unreasonably, in the same way that he would cure his own, knowing that the vexation of another is equally bad for him, as if he himself were stirred against another, unless he removes it, to the best of his ability, from his brother’s mind.

Saint John Cassian says that not only is a monk to cure his own wrath; he is also to seek to calm the anger of his brother as well. Anger, even when it does not explode in invectives and outward violence, poisons the cloister, causes hearts to grow cold and hard, stops up the wellsprings of prayer, and foments impurity.

6. The last is what is undoubtedly generally decisive in regard to all faults; viz., that he should realize daily that he is to pass away from this world; as the realization of this not only permits no vexation to linger in the heart, but also represses all the motions of lusts and sins of all kinds.

Finally, Saint John Cassian says what our father Saint Benedict enjoins in Chapter IV: the monk who remembers the shortness of life, the approach of death, and the judgment of God, will not harbour resentments nor permit vexation to lodge in his heart.

44. To fear the Day of Judgment.
45. To be in dread of hell.
46. To desire with a special longing everlasting life.
47. To keep death daily before one’s eyes.
48. To keep guard at all times over the actions of one’s life.

194. It is expressly forbidden that any monk take it upon himself to correct another. This is reserved to the Prior and, in his absence, to the Subprior. If there be any who, being offended in some way by another, have not the courage to make it the matter of a generous sacrifice, let them bring their complaints to the Prior and, in his presence, the matter will be brought to closure, without seeking further satisfaction, in submitting to what shall have been decided, and in making no more mention of it.

And in our Statutes we read:

194a. The monks will be on their guard against seeking to correct or reform brethren over whom they have no authority, whether it be in matters of the chant, or of the rubrics, or of the manner of working.

Once the prior has entrusted a particular charge or area of responsibility to a brother — the sacristy, library, kitchen, refectory, guesthouse, gardens, etc. — no one else may interfere in it or take it upon himself to correct the brother in this matter. The subprior may correct the brethren only in the absence of the prior. The brother charged with organising the work may correct the brethren working under his authority in any matter that pertains to the work at hand. Certain areas may overlap; this calls for loyal collaboration and mutual respect. At no time ought a brother take offense at an honest suggestion, or become imperious, or possessive of the area entrusted to him. Humility, charity, graciousness, and a sense of humour are always in order. The man who is quick to take offense or who magnifies the unintentional slight will never be at peace. Be ready, at all times, to forgive manifestations of impatience.

The novices and juniors do not presume to admonish their seniors. Should a young brother remark something in a senior that needs to be redressed, he may mention it discreetly and humbly to the prior or subprior, without insisting on his point of view or making any kind of demands. This chapter of the Holy Rule will be rightly understood and practiced only if we hear it and live in the light of Our Lord’s own words: