Skip to content
HomeRule of Saint BenedictHow Lauds are to be said on Week-days (XIII:2) 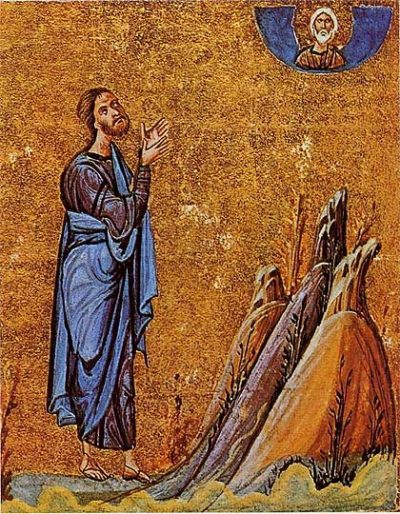 16 Feb. 17 June. 17 Oct.
The Office of Lauds and Vespers, however, must never conclude without the Lord’s Prayer being said aloud by the Superior, so that all may hear it, on account of the thorns of scandal which are wont to arise; so that the brethren, by the covenant which they make in that prayer when they say “Forgive us as we forgive,” may cleanse themselves of such faults. But at the other Offices let the last part only of the prayer be said aloud, so that all may answer, “But deliver us from evil.”

When visitors to Benedictine monasteries assist at the Offices of Lauds or Vespers, they are often surprised that, at the end of the celebration, the abbot alone chants the Pater Noster, while the monks, bowing profoundly, listen to the prayer. In the reformed Roman Rite, all sing the Pater Noster together; people have, over the past fifty years or so, grown accustomed to doing this. In the Benedictine tradition it is not so. For centuries Benedictines have followed Saint Benedict’s clear injunction in the Holy Rule. What does it signify?

Men newly come to the monastery are sometimes shocked when, for the first time, they are pricked by the thorns of scandal, that is by the weaknesses of their fathers and brothers. One father may show irritation or impatience; another may be careless in choir. One brother may be self–absorbed in the refectory and not notice that his neighbour has no water, or no salt, or no bread. Another brother may give the impression of playing free and easy with the abbot’s instructions in Chapter. Still another may leave his work half–done, or his tools in disorder. A monk, driven to exasperation, may let slip a sharp word or an unkind reflection.

There is a remarkable treatment of this sort of drama in the cloister in the novel by Pierre de Calan, Cosmas or the Love of God. Brother Cosmas, a novice in the grip of perfectionism suffers from an inability to live with the thorn pricks of day–to–day life in the cloister. Brother Cosmas is shocked by the human weaknesses he discovers all around him. He came to the monastery in search of a heavenly life; he found not angels, but men capable of gluttony, lust, greed, anger, sadness, lethargy, vainglory, and pride. How can it be, he asked himself, that the cellarer is so totally absorbed by business, and bank loans, and receipts for every expense? How can it be that Brother X. appears always to be eating or drinking something? How can it be that Brother Y. and Brother Z. exchanged angry words not five minutes after coming out of choir? Brother Cosmas found it nearly impossible to live with poor weak sinners who did not measure up to his notions of fervour, and discipline, and zeal. In the end, his inability to cope with “the thorns of scandal which are wont to arise” made him leave the monastery. I will not reveal the ending of the book. Read it yourselves. It will help you understand why Saint Benedict prescribes the Pater Noster twice each day “on account of the thorns of scandal which are wont to arise”.

When the abbot chants the Pater Noster at the end of Lauds and Vespers, he does so in persona Christi capitis, in the very person of Christ, the Head of His Mystical Body, the Church. When the Abbot chants the Our Father, he is, in effect giving his voice to Christ, so that through him, Christ might teach his monks how to pray, even as He taught His disciples how to pray, in response to the request of one among them: “Lord, teach us how to pray” (Luke 11:1). In antiquity, the Pater Noster was the priestly prayer par excellence. In the liturgical assembly the bishop or priest recited the Pater Noster. If Saint Benedict reserves the Pater Noster to the abbot, it is, says Blessed Schuster, because he supposes the abbot to be in priestly orders.

In consideration of the phrase, per ordinem dicatur, Blessed Schuster suggests that it may have been the custom, as it still is in some rites, for the choir to respond to each petition of the Pater Noster with an Amen. Dom Pothier edited the Mozarabic Pater Noster with its sequence of Amens, and it is a chant of striking beauty.

How do the monks respond to this? By bowing profoundly in choir: a gesture of complete submission, of humility, of obedience—and by hearkening with the ear of the heart to the words of Christ chanted by the abbot. Nowhere else does the first phrase of the Prologue of the Holy Rule take on such significance: “Hearken, O my son, to the precepts of thy Master, and incline the ear of thine heart.” What is the precept of the Master? First of all, it is this: “When you pray, say: Father, hallowed be thy name. Thy kingdom come. Give us this day our daily bread. And forgive us our sins, for we also forgive every one that is indebted to us. And lead us not into temptation.”

But there is more. Saint Benedict presents the Pater Noster, that the abbot chants twice daily over his monks, as a sacramental of healing, and as a covenant of mercy and of mutual forgiveness. As Brother Cosmas had to learn, monks, like all people living together, irritate and exasperate one another, they strike the sensitive chord and, even, wound one another. Saint Benedict himself knew this not theoretically but by experience. When the abbot chants the Pater Noster over his sons inclined in a profound silence, he is spreading over their scratches, their bruises, and their wounds, the healing balm of the prayer of Christ, and this with a supernatural delicacy and sureness of touch.

Hearing the Pater Noster chanted over them twice daily, the monks are drawn into a mysterious covenant: they bind themselves to forgive one another as they would be forgiven by God. They ratify the abbot’s prayer over them by saying aloud the very last sentence: Sed libera nos a malo, “But deliver us from evil”. The Pater Noster is recited at all the Hours, but secretly, this same last sentence alone being said aloud. The monastic life is a struggle, a spiritual combat and a kind of exorcism, but it is also a triumph, the victory of mercy over sin, of pardon over every offense, of joy over sorrow and, in the end, of life over death.