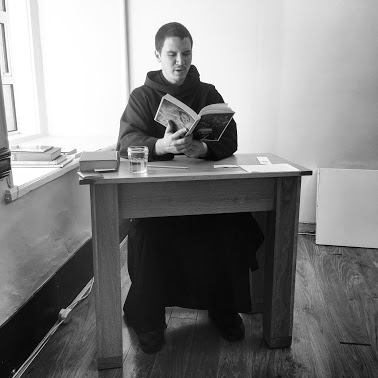 CHAPTER XXXVIII. Of the Weekly Reader
17 Mar. 17 July. 16 Nov.
Reading must not be wanting while the brethren eat at table; nor let any one who may chance to have taken up the book presume to read, but let him who is to read throughout the week begin upon the Sunday. After Mass and Communion, let him ask all to pray for him, that God may keep from him the spirit of pride. And let this verse be said thrice in the Oratory, he himself beginning it: “O Lord, Thou shalt open my lips, and my mouth shall declare Thy praise.” And so, having received the blessing, let him enter on his reading. The greatest silence must be kept at table, so that no whispering may be heard there, nor any voice except that of him who readeth. And whatever is necessary for food or drink let the brethren so minister to each other, that no one need ask for anything: but should anything be wanted, let it be asked for by a sign rather than by the voice. And let no one presume to put any questions there, either about the reading or about anything else, lest it should give occasion for talking: unless perchance the Superior should wish to say a few words for the edification of the brethren. Let the brother who is reader for the week take a little bread and wine before he begin to read, on account of the Holy Communion,* and lest it be hard for him to fast so long. Afterwards let him take his meal with the weekly cooks and other servers. The brethren are not to read or sing according to their order, but such only as may edify the hearers.

Saint Benedict, in this chapter, recalls the teaching of Cassian in the Institutes:

We have been informed that the plan that, while the brethren are eating, the holy lessons should be read in the Cœnobia did not originate in the Egyptian system but in the Cappadocian. And there is no doubt that they meant to establish it not so much for the sake of the spiritual exercise as for the sake of putting a stop to unnecessary and idle conversation, and especially discussions, which so often arise at meals; since they saw that these could not be prevented among them in any other way. For among the Egyptians and especially those of Tabenna so strict a silence is observed by all that when so large a number of the brethren has sat down together to a meal, no one ventures to talk even in a low tone except the dean, who however if he sees that anything is wanted to be put on or taken off the table, signifies it by a sign rather than a word. And while they are eating, the rule of this silence is so strictly kept that with their hoods drawn down over their eyelids (to prevent their roving looks having the opportunity of wandering inquisitively) they can see nothing except the table, and the food that is put on it, and which they take from it; so that no one notices what another is eating. (Institutes, Book IV, Chapter 17)

In some way, the ancient tradition of the Christian àgape lives on in Benedictine monasteries. Psalmody and prayers open and conclude our meals. While we eat, we listen to the reading of texts that lift the mind to God. The whole setting of the monastic refectory, resembling an ancient basilica, suggests that what takes place there is, in effect, a kind of liturgical action: there is the abbot’s table with the great crucifix behind it; the reader’s ambo or desk; and the tables of the brethren arranged, as it were, in two choirs. A kind of Eucharistic fragrance pervades the refectory. The two traditional blessings relate the common table to the Holy Table of the Altar and to the Heavenly Table:

The monk who is to read in the refectory receives a blessing on Sunday morning before entering into his week of service. Not all have the gift of reading in public. The reader must deliver his text intelligibly and in a voice loud enough to be heard above the inevitable background noise of the service of the tables.

Twice in this chapter Saint Benedict mentions Holy Communion. It was the custom, in Saint Benedict’s time, to celebrate Holy Mass on Sundays and the greater festivals of the saints. Holy Mass would end at about midday. Saint Benedict prescribes “a little bread and wine before he begin to read, on account of the Holy Communion”. This is not only because the reader, if he waits until after the meal, risks a headache and weakness from too prolonged a fast; it is also out of reverence for the Most Holy Sacrament. The “little bread and wine” serve as an ablution of the mouth, lest in reading or chanting, the reader inadvertently expectorate particles of the Sacred Host in his saliva. The custom of an ablution of the mouth after receiving Holy Communion is very ancient; traces of the custom have perdured, not only among certain Orthodox faithful, but even in some places in the West. I remember very well that my paternal grandmother, who received her First Holy Communion in County Leitrim in about 1909, was taught to cleanse her mouth with water immediately upon returning home from Holy Mass and before eating or drinking anything. I can still see her coming in from the early morning Mass. She would, without removing her hat and coat, light the burner under the kettle for tea and, then, go straight to her pantry for the traditional post–Holy Communion glass of water. It is interesting that such a custom was still practiced in early 20th century rural Ireland.

For Saint Benedict, the refectory is a place of silence. Even whispering—be it about the reading or about what is needed at table—is forbidden. Only the abbot is allowed “to say a few words for the edification of the brethren”. Blessed Schuster recounts that, as abbot of Saint–Paul–Without–the–Walls in Rome, he often welcomed Cardinals and other high–ranking personnages for a meal in the monastic refectory. A number of these distinguished men, says Blessed Schuster, were more impressed by the silence in the refectory than by anything else observed in the abbey. The solemn and supernatural atmosphere of the monastic meal is a prolongation of the sacred liturgy which, at all times and in all places, summons us to lift our hearts to God. Sursum corda. Hearts on high!