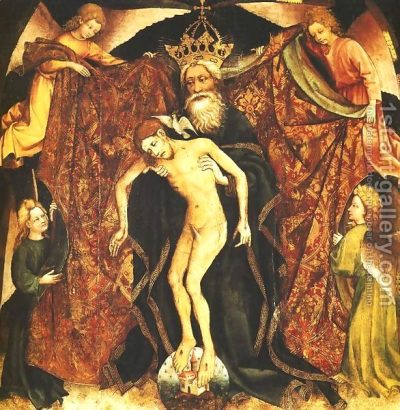 Blessed be the Holy Trinity and undivided Unity: we will give glory to Him, because He has shown His mercy to us. (Introit, Trinity Sunday)

He Has Shown Us His Mercy
Today’s Introit, from the book of Tobias, is a triumphal arch through which we pass into «the things that are above; where Christ is sitting at the right hand of God» (Colossians 3:1).  It presents us with nothing less than a foretaste of the heavenly liturgy. «We will ever give thanks to Him who has shown us His mercy» (Tobias 12:6).

Ad Patrem
Once one has discovered the mystery of the Most Holy Trinity — and this by the light of faith, and in the light of faith — one is compelled to raise one’s mind and heart outward and upward. Such is the nature of Christian prayer: it is always ad Patrem, per Filium, in Spiritu. Prayer is the upward flight of the soul into the embrace of the Father, with the Son, in the Holy Ghost. 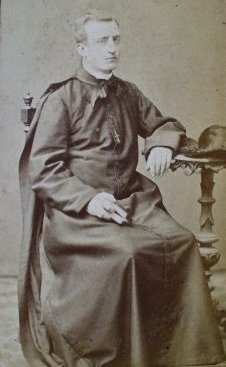 Blessed Marmion
The movement ad Patrem (towards the Father) describes the prayer of all the saints. We find it expressed most clearly and simply in the life and writings of our own great Irish Benedictine, Blessed Columba Marmion. If ever there was a saint utterly caught up in the mystery of the Most Holy Trinity and, at the same time, wonderfully gifted, by nature and by grace, to express what he experienced in faith, it is Blessed Abbot Marmion.

Ireland has always been a country marked by the Three Divine Persons; a nation mysteriously signed by the Most Holy Trinity; a people with the confession of the Most Holy Trinity branded, in some way, into its very corporate identity. How fitting, then, that a son of Ireland and a native of Dublin, Blessed Columba Marmion, should be among the greatest exponents of the glory of the Three Divine Persons in modern times.

On January 20th, 1906, Dom Columba Marmion received what he calls « a strong interior light » on the Three Divine Persons. This interior illumination on the mystery of the Most Holy Trinity changed his life. Allow me to recapitulate it somewhat schematically:

A Patre: All things come from the Father. We honour the Father by laying all things, and our very selves before Him in adoration and filial abandonment to His good pleasure. In doing this we become our true selves, our best selves « to the praise of His glory of His grace » (Ephesians 1:6).

Per Filium: The Son is the perfect Image of the Father, the « the brightness of his glory, and the figure of his substance » (Hebrews 1:3). We honour the Son by entering into His filial and priestly obedience to the Father in such wise that it is no longer we who live but Christ who lives in us (cf. Galatians 2:2). Thus does the Father recognize His First–Born Son in us, and us in His First–Born Son, saying of Christ and of each of His members, «This is my beloved Son, in whom I am well pleased» (Matthew 17:5).

In Spiritu: The Holy Ghost, quickens in all whom He has united to Christ, and who belong to Christ as members to their Head, the return ad Patrem. The same Spirit by whom we can say « Jesus is Lord » (1 Corinthians 12:3) so unites us to Him that, through Him, and with Him, and in Him, we can say «Father» and this with the unique filial accents of Jesus’ own prayer to the Father. Such a prayer is always heard because it is uttered in what Blessed Marmion calls the sanctuarium exauditionis, the sanctuary wherein all our requests are heard, that is, the bosom of the Father.

Two years after receiving this «strong interior light» on the Most Holy Trinity,  on Christmas Day 1908, Dom Columba Marmion wrote his personal Consecration to the Blessed Trinity. He was 50 years old at the time. In a letter to his friend, Bishop Vincent Dwyer, he says: «Since I doubled the cape of 50, I often think of eternity». Blessed Columba would live another fifteen years. His Consecration to the Blessed Trinity marked a great passage in his life: it was as if he passed through a door opening onto greater intimacy with the Three Divine Persons.

Blessed Marmion’s Consecration to the Blessed Trinity
Every line of his prayer is densely rich with biblical resonances: a compelling example of pietas sacerdotalis. It is at once a personal prayer coming out of real life with its struggles, its dark hours, and its losses; an affective prayer coming out of an exquisitely sensitive heart; and a profoundly theological prayer revealing its author’s love for doctrinal clarity.   Blessed Columba’s Consecration to the Blessed Trinity was the mature fruit of the light received in January 1906. It took two years for the light shed abroad in his heart to find expression as, pen in hand, he poured out his soul in the presence of God. Abbot Marmion’s Consecration to the Blessed Trinity stands like a twin beacon alongside the sublime prayer of Blessed Elisabeth of the Trinity in the great Trinitarian revival that marked Catholic spirituality at the beginning of the last century.

An Eternal Offering
One who has been seized by the glory of the mystery of the Most Holy Trinity will, like Blessed Columba Marmion, want to make of himself, of all that he is, and has, and does, a sacrifice of praise. The Secret of today’s Mass says this better than any one of us could ever hope to express it:

Hallow, we pray thee, O Lord our God, by our invocation of thy holy name, this victim for oblation, and by means of it, work upon us (perfice) until we too become an eternal offering to thee.

This is the ultimate vocation of every child, man, and woman: to become an eternal offering to the praise of the glory of the Most Holy Trinity.

O Father, take me unto thyself,
through thy beloved Son Jesus Christ,
in the fiery embrace of the Holy Ghost.

This is the secret movement of every Holy Mass: a real identification, by grace, with the Victim Christ in His oblation to the Father. The Son offers Himself, in the Holy Ghost, to the Father from the altar of the Cross while, at the same moment and in the same Holy Ghost, the Father takes the Son unto Himself. For the soul who enters into the movement of the Holy Sacrifice, heaven begins now. Holy Mass becomes a mystic ascent into the life of the Three Divine Persons. The Holy Sacrifice is the mercy of the Father descending, here and now, through Christ, by the action of the Holy Ghost, to catch us up and lift us into the divine embrace for which we were created and for which we yearn. Every misery brought to the Holy Sacrifice is, in this way, aspirated into the mercy of the Father, through Christ, by the action of the Holy Ghost. In the end, nothing of it is left: all can be turned, to use Blessed Elisabeth’s much–loved phrase from Saint Paul, «to the praise of His glory». Ut simus in laudem gloriæ ejus nos. (Ephesians 1:12).