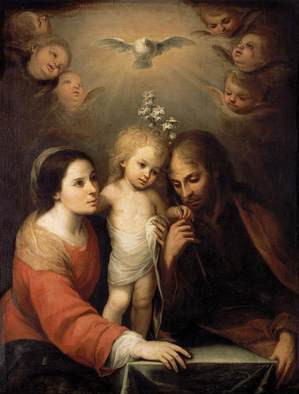 Saint Joseph in May
The month of May begins, in many places, with a feast of Saint Joseph. It is significant that the commemoration of Saint Joseph both precedes and follows the heart of the whole liturgical year: the glorious Pasch of the Lord. We celebrated Saint Joseph on March 19th; he returns to us again today.

Saint Joseph is never far from the Blessed Virgin Mary, his immaculate spouse and, yes, his best friend, the friend of his heart, the love of his life, the unfailing cause of his joy in the midst of anxieties, hardship, and sorrow. Saint Joseph participated intimately in all those sorrows of hers that announced and prefigured the mysteries of Christ’s passion, death, and burial: the prophecy of Simeon, the flight into Egypt, the disappearance of the boy Jesus in Jerusalem. If you would empathize with the Heart of Mary, go to Joseph.

In a 2006 Regina Caeli address, Pope Benedict XVI explained the link between Paschaltide and the popular dedication of the month of May to the Blessed Virgin. The Holy Father said this:

In the days which followed the Lord’s resurrection, the Apostles remained amongst themselves, comforted by the presence of Mary, and after the Ascension they persevered together with her in prayer awaiting Pentecost. Our Lady was for them mother and teacher, a role she continues to develop for the Christians of every age. Each year in Paschaltide, we relive most intensely this experience and maybe for this reason the popular tradition has consecrated to Mary the month of May, which normally falls between Easter and Pentecost. This month . . . is useful for us to rediscover the maternal function which she develops in our lives, that we may always be docile disciples and courageous witnesses of the risen Lord.

Joseph, having held in his arms the Body of the Infant Christ, having nourished and protected Him, cannot forsake His Mystical Body, the Church. Even the Protestant theologian Karl Barth was compelled to write: “If I were a Roman Catholic theologian, I would lift Saint Joseph up. He took care of the Child; he takes care of the Church.” Saint Joseph watches over each member of the Mystical Body with the same devotion, the same tenderness, and the same strength with which he watched over the precious members of Our Lord’s Sacred Humanity.

Saint Joseph and Immigrants
We recommend immigrants to Saint Joseph. He knows their struggles. He knows their anxieties, their hardships, and the fears. Saint Joseph was, after all, an immigrant in Egypt. He arrived there, in a strange land, with his Virgin Spouse and her Infant Son. He had to find housing, to look for work, to endure the suspicion, the prejudice, and the slights that are the lot of immigrants in every time and place.

Saint Joseph and Priests
And we recommend priests to Saint Joseph. The Church, in her wisdom, proposes to her priests two prayers in honour of Saint Joseph each day, one before Holy Mass, and one after. Every priest can find in Saint Joseph a friend, a model, a protector. Saint Joseph stands ready at every moment to introduce priests into a deeper intimacy with his Spouse, the Virgin Mary.

If you want to help priests, entrust them to Saint Joseph. All priests, especially parish priests, are exposed to being criticized and judged. It is a particular form of suffering that accompanies every priest from the day of his first Mass until the day of his last. I believe it was Archbishop Fulton Sheen who said that all priests are lacerated by the tongues of the pious! He knew of what he spoke; his own biography was entitled The Passion of Fulton Sheen. An effective way of countering the sins against charity that wound and discourage all priests is to entrust them to Saint Joseph.

Saint Joseph and Work
We recommend workers and those without work to Saint Joseph. People without meaningful work — be it manual or intellectual — fall more easily into depression. They have no self-esteem. They go from one thing to the next never finding the satisfaction and fulfillment that come from having a responsibility and from a job well done. Today let us not forget those suffering from idleness and unemployment. There is nothing more degrading to a human person. Even the sick and the very old find joy in work, in rendering the little service, in having others count on them for something.