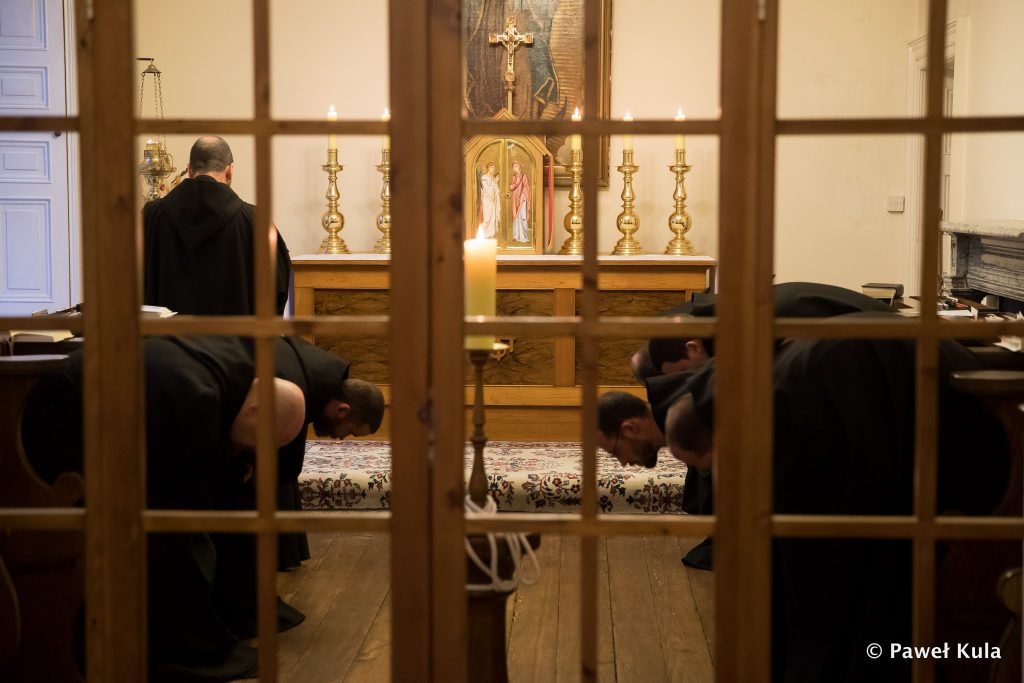 CHAPTER XIII. How Lauds Are to Be Said on Weekdays
16 Feb. 17 June. 17 Oct.The Office of Lauds and Vespers, however, must never conclude without the Lord’s Prayer being said aloud by the Superior, so that all may hear it, on account of the thorns of scandal* which are wont to arise; so that the brethren, by the covenant which they make in that prayer when they say “Forgive us as we forgive,” may cleanse themselves of such faults. But at the other Offices let the last part only of the prayer be said aloud, so that all may answer, “But deliver us from evil.”

When visitors to Benedictine monasteries assist at the Offices of Lauds or Vespers, they are often surprised that, at the end of the celebration, the Abbot alone chants the Our Father, while the monks, bowing profoundly, listen to the prayer. In the reformed Roman Rite, all sing the Our Father together; in the Benedictine tradition it is not so. For centuries Benedictines have followed Saint Benedict’s clear injunction in the Holy Rule. What does it signify? What does it suggest?

For Saint Benedict, the Abbot holds the place of Christ in the monastery; he is a living breathing icon of Christ in the midst of the brethren. His function obliges him to become ever more transparent, that is, to grow in purity of heart. The Abbot is at once the friend of the Bridegroom, and the Bridegroom’s authorized representative; his aspiration and his joy is to disappear, leaving to his monks only their faith’s perception of the Bridegroom’s Face, of His voice, His hands, and His heart.

When, then, the Abbot prays the Our Father at the end of Lauds and Vespers, he does so in persona Christi capitis sponsique, in the very person of Christ, the Head of His Mystical Body and Bridegroom of His Spouse, the Church. When the Abbot chants the Our Father, he is, in effect giving his voice to Christ, so that through him, Christ might teach his monks how to pray, even as He taught His disciples how to pray, in response to the request of one among them: “Lord, teach us how to pray” (Luke 11:1).

How do the monks respond to this? By bowing profoundly in choir: a gesture of complete submission, of humility, of obedience — and by hearkening with the ear of the heart to the words of Christ chanted by the Abbot. Nowhere else does the first phrase of the Prologue of the Holy Rule take on such significance: “Hearken, O my son, to the precepts of thy Master, and incline the ear of thine heart.” What is the precept of the Master? First of all, it is this: “When you pray, say: Father, hallowed be thy name. Thy kingdom come. Give us this day our daily bread. And forgive us our sins, for we also forgive every one that is indebted to us. And lead us not into temptation.”

But there is more. Saint Benedict presents the Our Father, that the Abbot chants twice daily over his monks, as a sacrament of healing, and as a covenant of mercy and of mutual forgiveness. Monks, like all people living together, irritate and exasperate one another, they strike the sensitive chord and, even, wound one another. Saint Benedict knew this not theoretically but by experience. When the Abbot chants the Our Father over his sons inclined in a profound silence, he is spreading over their scratches, their bruises, and their wounds, the healing balm of the prayer of Christ, and this with a supernatural delicacy and sureness of touch.

Hearing the Our Father chanted over them twice daily, the monks are drawn into a mysterious covenant: they bind themselves to forgive one another as they would be forgiven by God. They ratify the Abbot’s prayer over them by saying aloud the very last sentence: sed libera nos a malo, “But deliver us from evil.” The monastic life is a struggle, a spiritual combat, but it is also a triumph, the victory of mercy over sin, of pardon over every offense, of joy over sorrow and, in the end, of life over death.