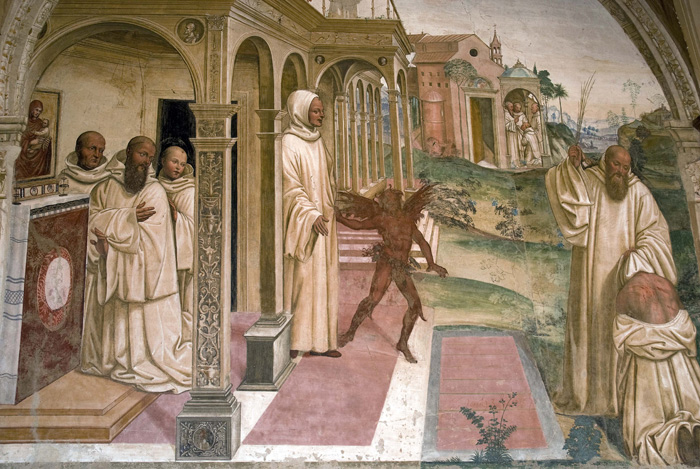 CHAPTER LXV. Of the Prior of the Monastery
22 Apr. 22 Aug. 22 Dec.
It happeneth very often that by the appointment of the Prior grave scandals arise in Monasteries; since there are some who, puffed up by the evil spirit of pride, and deeming themselves to be second Abbots, take upon themselves to tyrannise over others, and so foster scandals and cause dissensions in the community: especially in those places where the Prior is appointed by the same priest, or the same Abbots as appoint the Abbot himself. How foolish this is may easily be seen; for from the moment of his appointment an incentive to pride is given to him, the thought suggesting itself that he is freed from the authority of his Abbot, since he hath been appointed by the very same persons. Hence are stirred up envy, quarrels, backbiting, dissensions, jealousy and disorders. And while the Abbot and Prior are at variance with one another, it must needs be that their own souls are endangered by reason of their disagreement; and those who are their subjects, while favouring one side or the other, run to destruction. The evil of this peril falleth on the heads of those who by their action have been the cause of such disorders.

Our father Saint Benedict is not enthusiastic about having a second–in–command in the monastery. In this chapter, he treats of the possibility with extreme precaution and grave reservations. Although, in the end, Saint Benedict concedes that a second–in–command may be necessary, he does so somewhat unwillingly and with prudent warnings against all possible abuses of the office. The term prior, praepositus, or provost, means superior. Already in Saint Benedict’s time, the term was in use to designate the monastery’s second–in–command. In our monastery, given that we are still in the early stages of development, provisionally, the abbot is called the prior, and the prior is called the sub–prior.

There is nothing worse in a monastery than subaltern superiors who act like little tyrants. Saint Benedict warns against the spirit of pride that, all too easily, renders the exercise of authority toxic. He alludes to the divisions that can arise in a monastery when some of the community align themselves with the abbot, and others with the prior, creating two opposing factions. Saint Benedict’s realism is sobering. Echoing Saint Paul in Galatians 5:20 (yesterday’s Epistle), Saint Benedict speaks of “envy, quarrels, backbiting, dissensions, jealousy and disorders”. Saint Paul says that ” they who do such things shall not obtain the kingdom of God” (Galatians 5:21).

The devil delights in nothing more than sowing division. When the devil drives a wedge between the abbot and the prior, it is only a matter of time before the whole community disintegrates. When the abbot and the prior are not in communion of mind and heart, the whole monastery is at risk. The situation is similar to a household in which the father and mother are forever quarelling and at odds with one another. In such a household the unity and stability of the family suffer irreparable harm. The abbot and the prior must, then, remain in profound communion with one another, the prior being perfectly loyal and obedient to the abbot in all things. Our Constitutions treat of the prior of the monastery in these terms:

275. The obligation of the Subprior is to assist the Prior in his charge, to supply for him should he be absent, and to keep watch over the community, so as to know if the brethren be dutiful in the exercise of their responsibilities; if there be union and peace among them; if they render respect and obedience to the Prior; if silence be observed exactly; if there be any negligence in going to the Divine Office, the refectory, lectio divina, adoration, or assemblies of the community.

276. Should the Subprior have to reprove some fault, he will always do so in the form of a recommendation, which the brethren shall receive amiably; the Prior shall correct severely one who scorns the observations made by the Subprior.

278. In the absence of the Prior, or at his command, the Subprior shall preside over the chapter and other community exercises. He will be perfectly united to the Father Prior, and uphold his authority and his power; he will carry out his orders promptly, and see to it that others observe them, without displaying any sentiments to the contrary that he may have, and without permitting himself to murmur against what the Prior wills. His perfect obedience and humility must give everywhere the example of a wholehearted submission, so as to maintain the brethren in their duties, and preserve a holy union among them. Should he sometimes be obliged to listen to a brother’s complaints, he will do whatever he can, by his gentleness and prudence, to dispel the troubles weighing upon that brother’s mind.

The prior appoints the subprior and other officers of the monastery annually on the day of his choice between August 15th and September 14th. At the end of the day, however, in a small, developing monastery such as ours, all are responsible for the good order, faithful observance, and cheerful discipline of the community. All are bound to be loyal to the prior, obedient in all things, and “careful to keep the unity of the Spirit in the bond of peace” (Ephesians 4:3). To place this phrase in context, we open to the 4th chapter of Saint Paul’s Epistle to the Ephesians:

I plead with you to live as befits men called to such a vocation as yours. You must be always humble, always gentle; patient, too, in bearing with one another’s faults, as charity bids; eager to preserve that unity the Spirit gives you, whose bond is peace. You are one body, with a single Spirit; each of you, when he was called, called in the same hope; with the same Lord, the same faith, the same baptism; with the same God, the same Father, all of us, who is above all beings, pervades all things, and lives in all of us. (Ephesians 4:1–6)