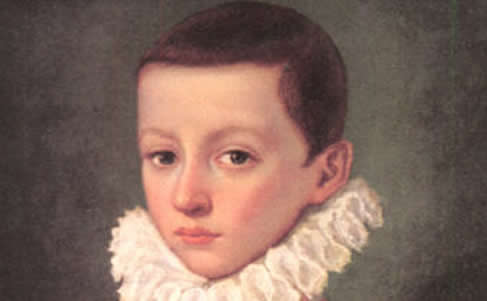 Sexual Exploitation, Then and Now
The young Italian prince Luigi Gonzaga preserved his innocence in a milieu where boys were often the victims of sexual predators — both women and men — and where the sexual exploitation of youngsters was a divertissement of the decadent. His angelic purity ought, more than ever, to be presented as a gift of incredible beauty and as costly prize. Luigi was not one to shrink from spiritual combat. Even as a boy, he went forward with courage and grace, his eyes set on “the substance of things to be hoped for, the evidence of things that appear not” (Heb 11:1).

Introit (Psalm 8:8, Ps 148:2)
Thou hast made him a little less than the angels:
Thou hast crowned him with glory and honour.
Ps. Praise the Lord, all his angels: praise ye Him all His hosts.

There are two allusions to the angels in this relatively brief chant. Our Lord gives us the key to understanding the angelic quality of Saint Aloysius when he says: “See that you despise not one of these little ones; for I say to you, that their angels in heaven always see the face of My Father who is in heaven” (Mt 18:10). Look at the eyes of Aloysius; they reflect the Face of the Father.

The Collect is splendidly realistic. Not all of us have followed Saint Aloysius along the path of “a wonderful innocence of life.” Some of us may have lost that innocence by weakness in the face of occasions of sin, others by a calculated choice. Still others had that “wonderful innocence” taken from them. One has to have read certain pages of the Journals of Julien Green to understand the repercussions over a lifetime of an innocence lost.

The Church addresses the dilemma in her prayer: eius meritis et precibus concede, ut innocentem non secuti, poenitentiam imitemur. “Grant through his merits and prayers, that we who have not followed him in his innocence, may imitate him in his penance”. Penitence here means more than acts of asceticism; it refers to the change of direction by virtue of which one begins to live with, as Blessed Elizabeth of the Trinity would say, with one’s eyes in the eyes of Christ.

The liturgy places the Gradual in the mouth of Saint Aloysius. It is a chant of thanksgiving for the gift of divine intimacy, and for the shining innocence that is its fruit.

Gradual (Psalm 70:5-6; Ps 40:13)
Thou, my Lord, the hope of my youth,
Thou hast upheld me from birth,
Thou hast guarded me ever since I left my mother’s womb.
V. Thou dost befriend my innocence,
and wilt have me stand continually in Thy presence.

Alleluia Verse (Ps 64:5)
Blessed is the man on whom Thy choice falls,
whom Thou bringest near to Thyself,
bidding him dwell in Thy palace.

Here the Church remembers Aloysius as one chosen by God and brought near to Himself to live always in the courts (or palace) of the Lord. The underlying idea is that Luigi, destined to live in a Renaissance palace, lives out his days instead in the courts of the Lord, in the household of the King.

Offertory Antiphon (Ps 23:3-4)
Who dares climb the mountain of the Lord,
and appears in His sanctuary?
The guiltless in act, the pure in heart.

Returning to Psalm 23, the source of the Introit, for the Offertory procession, the Church engages in a question and answer. This is sung at the very moment the priest ascends to the altar, climbing the mountain of the Lord and appearing in His sanctuary. One hears above this antiphon, in a kind of mystical counterpoint, the promise of Our Lord in the Beatitudes: “Blessed are the clean of heart: for they shall see God” (Mt 5:8). Look at the eyes of Luigi in the portrait above; it is the gaze of a clean heart, the gaze of one who sees God.

Secret or Prayer Over the Oblations
Lord, make us sit down to the heavenly banquet
clothed in that wedding-garment which the loving care and ceaseless tears of Aloysius
adorned with pearls beyond price.

Such richness! The prayer draws from the Canticle of the Lamb in the Apocalypse, the very sentence used in the invitation to Holy Communion : “Blessed are they that are called to the marriage supper of the Lamb” (Ap 19:9). The wedding-garment is the white robe of baptism. Aloysius, with his pia praeparatio (translated above as loving care) and his ceaseless tears adorned the robe of is baptism with pearls of inestimable price. “The kingdom of heaven is like a merchant in search of fine pearls, who on finding one pearl of great value, went and sold all that he had and bought it” (Mt 13:45).

Communion Antiphon (Ps 77:24-25)
The bread of heaven was His gift to them:
man ate the bread of angels.

Aloysius’ angelic innocence is the fruit of participation in the Eucharist. The Eucharist is “the wheat of the elect, and the vinum germinans virgines, the virginizing wine (Zac 9:17)!

Postcommunion
Here again, in a very brief prayer, are two allusions to the angels.
Grant, Lord, that we who have been nourished with the bread of angels,
may also live like angels,
and after the example of him whose feast we keep today,
remain ever constant in thanksgiving.

We will never become angels — in spite of the New Age stupidity being marketed in your neighbourhood bookstore — but we are called to live like angels, that is, in loving chastity; in treasuring and protecting the joy of innocence; in quick obedience to the commands of the Lord; in contemplation of the Face of Christ; and in ceaseless adoration and praise. That is the angelic life. May Saint Aloysius Gonzaga help us to live it.