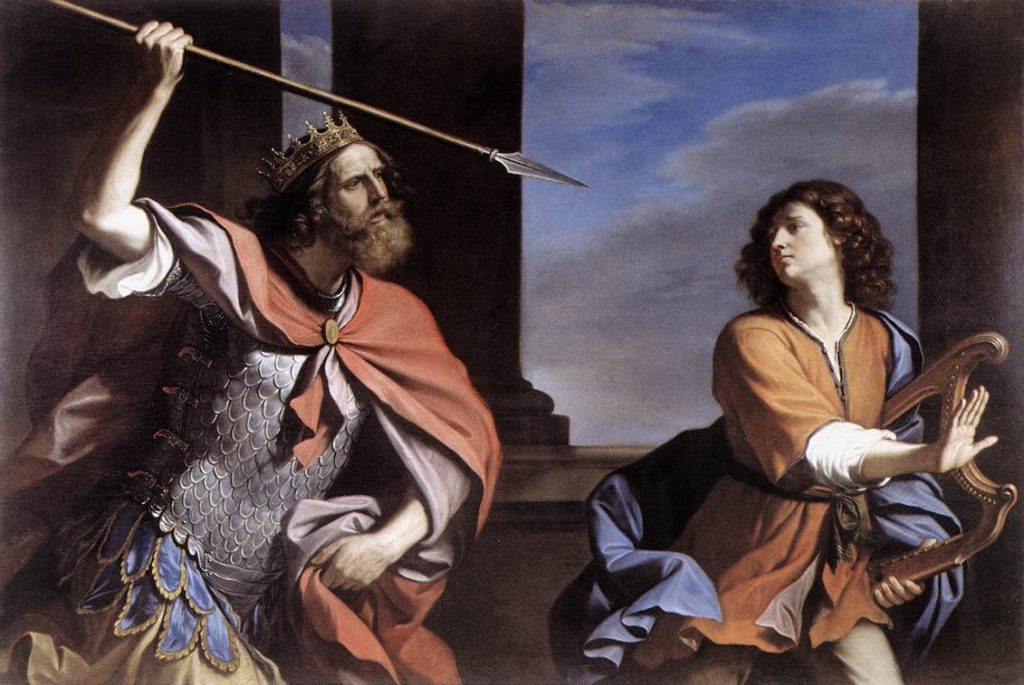 David’s Cry from the Heart
Today’s Holy Mass opens with a great cry to God, a cry wrung from the heart of David:

Hear, O Lord, my voice, with which I have cried to thee: have mercy on me and hear me. Turn not away thy face from me; decline not in thy wrath from thy servant. Be thou my helper, forsake me not; do not thou despise me, O God my Saviour. (Psalm 26:7,9)

David’s Tribulations
Since last Sunday, the life and adventures of David have occupied the Church’s meditation. We read of his astonishing victory over the giant Goliath with nothing more than a slingshot and stone. The Israelites acclaimed the young hero and raised a mighty cheer: “Saul slew his thousands and David his ten thousands!” This did not please Saul, who fell into a fit of jealousy, saying, “They have given David ten thousands, and to me they have given but a thousand; what can he have more but the kingdom?” (1 Samuel 18:8). Poisoned by jealousy and sunk into a kind of madness, Saul tried to kill David by pinning him to the wall with his javelin; twice David stepped aside just in time to dodge the javelin. Then Saul tried to arrange David’s death by sending him into battle, but David returned alive and well.

The Death of Saul and Jonathan
After this, Saul was set on killing David. David could have assassinated Saul in self–defense, but he refused to lay a hand on him, because Saul was, in spite of everything, the anointed of the Lord. So great was David’s reverence for God’s election of Saul, that he refused to harm him, even when occasions were given him to do so. In the end, Saul killed himself in battle against the Philistines by throwing himself down upon his spear. Jonathan, Saul’s son, and David’s nearest and dearest friend, was also killed in battle, causing David to curse with drought and barrenness the lush green mountains of Gelboe, the scene of the tragedy. David keened, giving voice to a terrible lament, and this lament was the Magnificat Antiphon at Vespers yesterday evening.

No Rest but in God’s Hands
In the life and adventures of David, there is nothing tidy or simple. All his relationships are marked by extremes of passion and sentiment: tenderness and violence; love and hatred; lust and purity; pride and humility. The death of Saul, with whom David had so complicated and tortured a relationship, upon the heights of Gelboe, and the death of Jonathan, Saul’s son, and David’s dearest friend, cause David to seek God alone. He cries out to God. David’s happiness and security lie in no passing relationship, in no human friendship, in no bond, save in the bond that unites him to God alone. David learns, by means of sin, failure, and tragic losses to say, in the end: “No rest has my soul but in God’s hands” (Psalm 61:2).

Good Things Exceeding All Desire
The trauma and tragedy that mark life in this vale of tears, oblige us, again and again, to lift our hearts to God and to “seek the things that are above; where Christ is sitting at the right hand of God” (Colossians 3:1). The Collect of this Fifth Sunday after Pentecost speaks of these good things:

O God, who hast prepared for those who love Thee such good things as eye hath not seen; pour into our hearts such love towards Thee, that we loving Thee above all things, may obtain Thy promises, which exceed all that we can desire.

Benedictine Life
In the Epistle, Saint Peter (whose great festival is but ten days away on June 29th) tells us that those who yearn for the good things of heaven and, already here below, love God above all things, will live together “all of one mind, having compassion one of another, being lovers of the brotherhood, merciful, modest, humble” (1 Peter 3:8). Is this not a description of Benedictine life? Saint Benedict seems to echo the Prince of the Apostles when he says in Chapter LXXII of the Holy Rule:

Let them most patiently endure one another’s infirmities, whether of body or of mind. Let them vie with one another in obedience. Let no one follow what he thinketh good for himself, but rather what seemeth good for another. Let them cherish fraternal charity with chaste love, fear God, love their Abbot with sincere and humble affection, and prefer nothing whatever to Christ. And may He bring us all alike to life everlasting.

A Mercy of Peace, A Sacrifice of Praise
In the Gospel, Our Lord tell us that our life of worship — the ceaseless rhythm of liturgical psalmody and perpetual adoration that make monks on earth akin to the angels in heaven — is pleasing to the Father only insofar as it is accompanied by a ceaseless exercise of pardon, and by the unimpeded exchange of mercy that, flowing out from the altar, irrigates our life and, thereby, makes it possible for us to return to the altar, there to offer the Holy Sacrifice with pure hearts. This is the meaning of the great cry that, in the Divine Liturgy of Saint John Chrysostom, goes up at the beginning of the anaphora: “A mercy of peace! A sacrifice of praise!”

At the Offertory of the Mass, it is David, once again, who raises his voice in song. In the voice of David we hear the voice of Christ and of His Bride the Church. In David’s prayer we recognise the prayer of every soul illumined by the chants, and prayers, and lessons of the Mass, and thus made ready to enter into the Holy Sacrifice:

I will bless the Lord, who hath given me understanding: moreover, I set God always in my sight: for he is at my right hand, that I be not moved. (Psalm 15:7–8)

Communion, Foretaste of Heaven
Finally, in the Communion of the Mass, we return to Psalm 26, the psalm of the Introit, to give voice to the desire for heaven that was introduced in the Collect.

One thing I have asked of the Lord, this will I seek after; that I may dwell in the house of the Lord all the days of my life. (Psalm 26:4)

In heaven all our passions will be quieted; all our vices cured; all our tears wiped away; all our hungers satisfied; all our thirsts quenched; all our yearnings fulfilled. For the man who lives here below with his heart set on high, and who partakes of the divine gifts of Christ’s Body and Blood, heaven begins on earth. Even amidst the hard things that, at certain hours, make life bitter, in the living Bread come down from heaven there is a foretaste of eternal sweetness. “O taste and see” (Psalm 33:9).