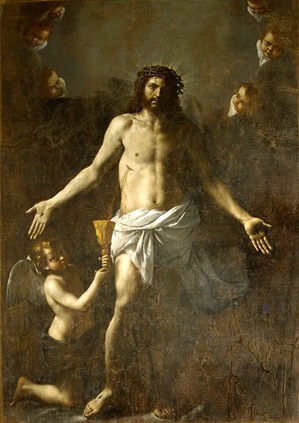 Humiliation
Mother Mectilde de Bar was fond of repeating to her daughters that, “a victim of the Holy Sacrament [that is, one entirely offered and made over to God with Christ in the Most Holy Eucharist], even in the midst of all the good she may do, must not know what it means to have honour, praise, esteem, glory, and elevation; and that her portion in this world must be shame, humiliation, and opprobrium.

Two Different Registers: the Psychological and the Mystical
This view of monastic life may offend the ears of those educated to value affirmation, self-esteem, and a healthy notion of one’s self-worth. None of these things are in contradiction with Mother Mectilde’s teaching. They belong to two different registers. Affirmation, self-esteem, and self-worth belong to the register of human psychology and are necessary elements of one’s mental and emotional health. Mother Mectilde’s teaching belongs to the register of mystical identification with Christ, the Suffering Servant, whose passion will perdure until the end of time in the members of His Mystical Body, and in His Eucharistic Body in the Most Holy Sacrament of the Altar.

There is no beauty in him, nor comeliness: and we have seen him, and there was no sightliness, that we should be desirous of him: Despised, and the most abject of men, a man of sorrows, and acquainted with infirmity: and his look was as it were hidden and despised, whereupon we esteemed him not. Surely he hath borne our infirmities and carried our sorrows: and we have thought him as it were a leper, and as one struck by God and afflicted. But he was wounded for our iniquities, he was bruised for our sins: the chastisement of our peace was upon him, and by his bruises we are healed. (Isaiah 53:2-5)

Mectilde and Thérèse
Here again, Mother Mectilde is close to Saint Thérèse of the Child Jesus and of the Holy Face. Thérèse wrote:

O Lord, send us away justified! May all those who are in no way illumined by the bright torch of the Faith at last see it shine. O Jesus, if it is necessary that the table they have soiled be purified by one soul who loves You, I am willing to eat alone the bread of suffering, even until it pleases You to admit me to Your Kingdom of light. The one grace I ask is never to offend You.

Thérèse: the Table and the Bread
The image of the table, like the image of bread, is a Eucharistic one. It is not often recognized that Saint Thérèse situates her identification with sinners and unbelievers in a Eucharistic context. Mother Mectilde’s spirit of reparation in the 17th century and Saint Thérèse’s spirit of solidarity with sinners in the 19th are, in effect, two expressions of the same mystical charism. The “bread of suffering” is the “living Bread come down from heaven” (John 6:41), and this because, as Saint Paul says, “as often as you shall eat this bread, and drink the chalice, you shall shew the death of the Lord, until he come” (1 Corinthians 11:26). One cannot partake of the Most Sacred Body of the Lord without accepting a share in His Passion. This, again, is why the Apostle says, “As it is written: For thy sake we are put to death all the day long. We are accounted as sheep for the slaughter” (Romans 8:36), and also, “We who live are always delivered unto death for Jesus’ sake; that the life also of Jesus may be made manifest in our mortal flesh.” (2 Corinthians 4:11)

Chapter VII of the Holy Rule
Mother Mectilde is a Benedictine through-and-through; she has interiorized the essence of Chapter VII of the Holy Rule, Of Humility. For Mother Mectilde, as for Saint Benedict, her father in Christ, humility has to do with an effective identification with the suffering Christ in His abjection, in His self-emptying, and in the rejection He suffers on the part of men. In Chapter VII’s fourth degree of humility, Saint Benedict says:

The fourth degree of humility is, that if in this very obedience hard and contrary things, nay even injuries, are done to him, he should embrace them patiently with a quiet conscience, and not grow weary or give in, as the Scripture saith: “He that shall persevere to the end shall be saved. And again: “Let thy heart be comforted, and wait for the Lord.” And shewing how the faithful man ought to bear all things, however contrary, for the Lord, it saith in the person of the afflicted: “For Thee we suffer death all the day long; we are esteemed as sheep for the slaughter.” And secure in their hope of the divine reward, they go on with joy, saying: “But in all these things we overcome, through Him Who hath loved us.” And so in another place Scripture saith: “Thou hast proved us, O God; Thou hast tried us as silver is tried by fire; Thou hast led us into the snare, and hast laid tribulation on our backs.” And in order to shew that we ought to be under a superior, it goes on to say: “Thou hast placed men over our heads.” Moreover, fulfilling the precept of the Lord by patience in adversities and injuries, they who are struck on one cheek offer the other: to him who taketh away their coat they leave also their cloak; and being forced to walk one mile, they go two. With Paul the Apostle, they bear with false brethren, and bless those that curse them.

The Passion of Christ in History
There are those, even, alas, among Catholics, who would argue that the Passion of Christ, once accomplished, at a given moment in history, is over and done with, swallowed up in the triumph of the Resurrection and, in no way, prolonged in history. Divine Revelation, however (being both Scripture and Tradition), as well as the experience of the saints and mystics affirm that Christ suffers, and will continue to suffer, in His Mystical Body and in His Eucharistic Body, and this until the end of time. Our Lord Himself instructed Saul of His own suffering in the sufferings inflicted on the members of His Mystical Body.

And falling on the ground, he heard a voice saying to him: Saul, Saul, why persecutest thou me? Who said: Who art thou, Lord? And he: I am Jesus whom thou persecutest. (Acts 9:4-5)

Saint Margaret Mary Alacoque
The sufferings of Our Lord in the Sacrament of His Love would be, for some, more difficult to grasp were it not for the vivid reproaches of the Sacred Heart of Jesus addressed to Saint Margaret Mary:

Behold the Heart which has so loved men that it has spared nothing, even to exhausting and consuming Itself, in order to testify Its love; and in return, I receive from the greater part only ingratitude, by their irreverence and sacrilege, and by the coldness and contempt they have for Me in this Sacrament of Love. But what I feel most keenly is that it is hearts which are consecrated to Me, that treat Me thus.

Whosoever of the faithful have piously pondered on all these things must need be inflamed with the charity of Christ in His agony and make a more vehement endeavor to expiate their own faults and those of others, to repair the honor of Christ, and to promote the eternal salvation of souls. And indeed that saying of the Apostle: “Where sin abounded, grace did more abound” (Romans v, 20) may be used in a manner to describe this present age; for while the wickedness of men has been greatly increased, at the same time, by the inspiration of the Holy Ghost, a marvelous increase has been made in the number of the faithful of both sexes who with eager mind endeavor to make satisfaction for the many injuries offered to the Divine Heart, nay more they do not hesitate to offer themselves to Christ as victims. For indeed if any one will lovingly dwell on those things of which we have been speaking, and will have them deeply fixed in his mind, it cannot be but he will shrink with horror from all sin as from the greatest evil, and more than this he will yield himself wholly to the will of God, and will strive to repair the injured honor of the Divine Majesty, as well by constantly praying, as by voluntary mortifications, by patiently bearing the afflictions that befall him, and lastly by spending his whole life in this exercise of expiation.

The Finding of the Cross and Its Exaltation
Mother Mectilde practiced what she preached. Readily she accepted whatever humiliations, calumnies, accusations, and offenses came her way, seeing in them so many occasions of mystical union with the Christus Passus. Not without wit, Mother Mectilde declared, “The Invention [Finding] of the Cross is a feast that occurs every day, because, ceaselessly, one encounters suffering; but it is not so with the Exaltation of the Cross; nothing is more rare than to see tribulation honoured and accepted.”

Jealousies
As is often the case, even today, the greater number of her humiliations and sufferings came from pious persons. The establishment of her monastery in the presence of the Queen, Anne of Austria; a steady flow of vocations to the community; and the esteem in which she was held by persons highly-placed in the Church, stirred up jealousy. Jealousy, once stirred up, will stop at nothing to destroy the object of its animosity.

Heroic Charity and Silence
Heroically, Mother Mectilde nourished an exquisite charity and a touching love for those who humiliated her and treated her with suspicion. People who had absolutely no authority over her, and no right to do so, gave themselves the mission of interrogating her, of examining her motives, of questioning her actions. These pious zealots, whatever their intentions, obliged her to undergo their hurtful and wounding inquisitions. Mother Mectilde could have revealed the work of God in her soul and, thereby, silenced her critics and accusers but, instead, she resolved never to justify herself and never to complain.