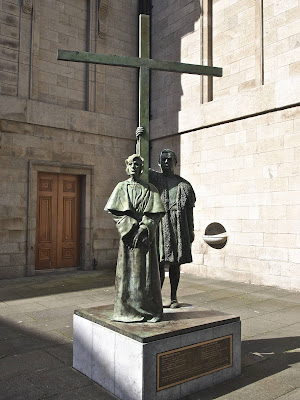 The photograph shows statues of the martyrs Blessed Margaret Ball and Blessed Francis Taylor at Saint Mary’s Pro-Cathedral in Dublin. We keep their feast today.

Blessed Margaret Ball
Blessed Margaret Ball was born Margaret Birmingham near Skreen in County Meath in 1515. Her father, Nicholas, had left England because, with other members of his family, he did not accept the religious reforms of Henry VIII; he settled on a farm in Corballis, County Meath. At the age of 15, Margaret married Alderman Bartholomew Ball of Balrothery, who operated the bridge over the Dodder which still carries his name. Margaret had ten children, though only five survived to adulthood. Her husband was elected Mayor of Dublin in 1553, making Margaret the Mayoress.

Betrayed by Her Son
With the accession of Queen Elizabeth I, Margaret’s son Walter renounced his Catholic faith and became a Protestant. His mother, in an attempt to win him back to the one, truth faith, invited him to meet “a special friend”; when Walter arrived at his mother’s house, he found Archbishop Dermot O’Hurley, celebrating Holy Mass with his mother and other family members in attendance. He had his mother arrested and thrown into Dublin Castle. Margaret could have secured her freedom if she took the Oath of Supremacy, but she refused to deny her Catholic faith. She died in 1584, aged 69 years, and crippled with arthritis after three years in the cold, damp dungeons. Magnanimously, she left her property to the Protestant son who had put her in prison.

Blessed Francis Taylor
Two generations later the same pattern was repeated by Francis Taylor, Margaret Ball’s grandson-in-law, who was born about 1550 in Swords, County Dublin. Francis was elected Mayor of Dublin 1595. He was later condemned to the dungeons of Dublin Castle after exposing fraud in the parliamentary elections to the Irish House of Commons. For seven years he refused to deny his Catholic faith by taking the Oath of Supremacy which could have obtained his freedom. Blessed Francis Taylor died in Dublin Castle on 29 January 1621.