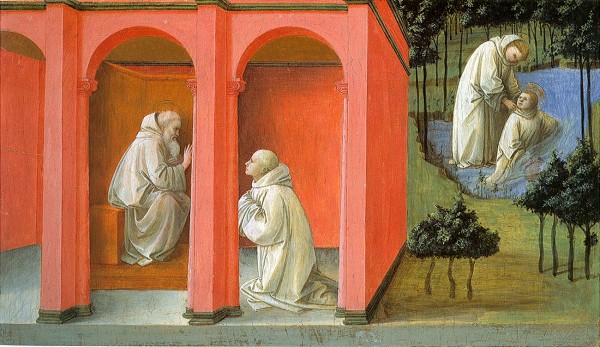 When Thou Passest through the Waters
Saint Maurus, together with Saint Placid, is honoured as one of the first disciples of our father Saint Benedict. Saint Gregory the Great, in his Life of Saint Benedict (Second Book of The Dialogues), recounts the story of Saints Maurus and Placid. Today’s feast of Saint Maurus brings with it a particular grace of consolation to souls passing through danger, anxiety, and affliction. Last evening at First Vespers of the feast, as I chanted the capitulum (short lesson) at Vespers, I was struck by its relevance to the lives of many who are dear to me. The text was chosen to recall the miracle of Saint Maurus who, obedient to the command of Saint Benedict, ran over the surface of the waters at Subiaco to rescue little Saint Placid was in danger of drowning. :

Fear not, for I have redeemed thee, and called thee by thy name: thou art mine. When thou shalt pass through the waters, I will be with thee, and the rivers shall not cover thee: when thou shalt walk in the fire, thou shalt not be burnt, and the flames shall not burn in thee: For I am the Lord thy God, the Holy One of Israel, thy Saviour. (Isaias 43:1–3).

A Child Offered to God
Saint Maurus’ parents, wealthy Romans, presented him to Saint Benedict to be raised in the monastery. Saint Maurus, together with his younger companion, Saint Placid, would be considered the first Benedictine Oblates. In Saint Benedict’s time it would not have been uncommon for small boys to be offered to God as a pure and spotless oblation. 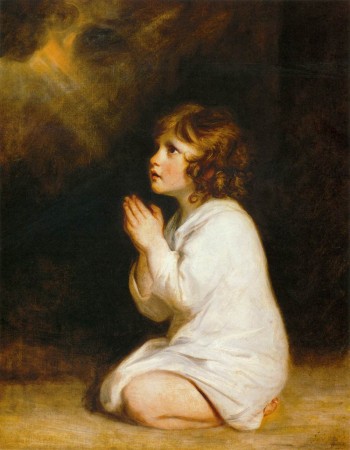 The prophet Samuel’s mother did as much in the days of Heli, the priest of Shiloh. You will recall the distress of the childless Hannah, and her pilgrimage to the sanctuary at Shiloh to beg for the gift of a child:

Sad at heart, she prayed to the Lord with many tears, and made a vow: Lord of hosts, if thou wilt take good heed of this sorrow I bear, if thou wilt keep this handmaid of thine ever in remembrance, and grant her a son, then he shall be my gift to the Lord all his life long, a Nazirite unshorn. Such was the prayer she went on repeating, there in the Lord’s presence. (1 Samuel 1:10–12)

Rite of Oblation
The rite by which a boy becomes an Oblate — literally, an offering made over to God — is wonderfully eloquent. Once it is certain that the boy’s parents have renounced all claim over him, and will not seek to entice him out of the cloister back into the world by offering him an inheritance, the boy is led to the altar of the Oratory of the monastery.  There, the boy’s little hand is wrapped in the altar linen, the ample corporal upon which rest the oblata of bread and wine set apart for the Holy Sacrifice. The child, together with the offerings of the Mass, is made over to God in an irrevocable manner.

A Sacrificial Victim
This rite is extremely important, not only for Oblates of all times and ages, but also for monks, because its casts a theological light over the mystic significance of monastic profession. When a man “makes himself over to God” by monastic profession, he is identifying himself with the offering of bread and wine that will become, as the Roman Canon puts it, the hostia pura, hostia sancta, hostia immaculata, the pure victim, the holy victim, the spotless victim who offers Himself in sacrifice to the Father. Mother Mectilde de Bar’s emphasis on the monastic life as a state of victimhood is not, as some have contended, a marginal development in 17th century piety; it is, rather, deeply rooted in Saint Benedict’s own Eucharistic understanding of monastic profession.  In his commentary on the Holy Rule. Dom Paul Delatte (1890-1921), abbot of Solesmes explains the significance of the prostration of the newly professed monk before the altar after singing the Suscipe. The abbot writes:

There lies there . . . a living victim, a “pure, holy, and unspotted victim,” reunited to the Victim on the altar, offered and accepted with that Victim, and enwrapped by the deacon in the fragrance of the same incense. Then the Mass continues. Motionless and silent, like the Lamb of God, the newly-professed suffers himself to be immolated and consumed mystically by the Eternal High Priest. How sweet that Mass and that Communion! Our whole monastic life should resemble this profession Mass. (Commentary on the Holy Rule of Saint Benedict)

Monks and Oblates
One cannot reflect on the import of the feast of Saint Maurus without taking these reflections on oblation and victimhood into account. The monastic vocation of Saint Maurus began at the altar and was consummated at the altar; it was entirely Eucharistic in origin and in its ultimate realisation. The vocation of Benedictine Oblates also begins at the altar and is consummated there so often as they participate in the Holy Sacrifice of the Mass and, by their inward adhesion to the words and rites of the sacred liturgy, unite themselves to Jesus Christ in His oblation to the Father.