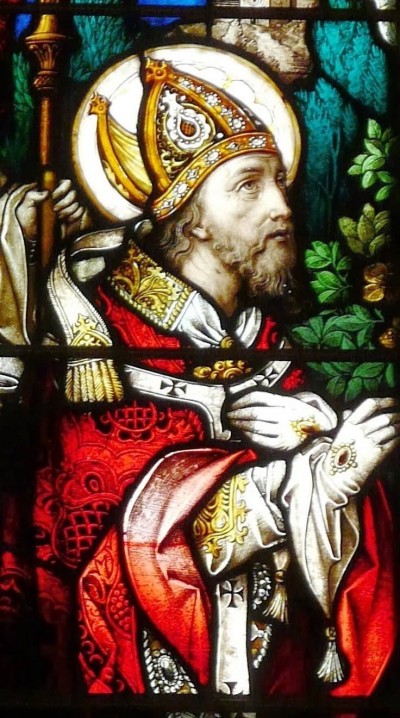 Today is the feast of Saint Malachy of Armagh. Saint Bernard of Clairvaux, who counted Saint Malachy among his friends, describes the Archbishop of Armagh’s pastoral plan for Ireland:

A Consuming Fire and an Axe
He rejoiced as a giant to run everywhere. You might call him a consuming fire burning the briers of crimes. You might call him an axe or a mattock casting down evil plantings. He extirpated barbaric rites, he planted those of the Church. All out-worn superstitions (for not a few of them were discovered) he abolished, and, wheresoever he found it, every sort of malign influence sent by evil angels.

None in the City nor in the Whole Bishopric Could or Would Sing
In fine whatsoever came to his notice which was irregular or unbecoming or perverse his eye did not spare; but as the hail scatters the untimely figs from the fig-trees, and as the wind the dust from the face of the earth, so did he strive with all his might to drive out before his face and destroy entirely such things from his people. And in place of all these the most excellent legislator delivered the heavenly laws. He made regulations full of righteousness, full of moderation and integrity. Moreover in all churches he ordained the apostolic sanctions and the decrees of the holy fathers, and especially the customs of the holy Roman Church. Hence it is that to this day there is chanting and psalmody in them at the canonical hours after the fashion of the whole world. For there was no such thing before, not even in the city. He, however, had learnt singing in his youth, and soon he introduced song into his monastery, while as yet none in the city, nor in the whole bishopric, could or would sing.

The Most Wholesome Usage of Confession
Then Malachy instituted anew the most wholesome usage of Confession, the Sacrament of Confirmation, the Marriage contract — of all of which they were either ignorant or negligent. And let these serve as an example of the rest, for here and through the whole course of the history we omit much for the sake of brevity.

Honouring of the Divine Offices and the Veneration of the Sacraments
Since he had a desire and a very great zeal for the honouring of the divine offices and the veneration of the sacraments, lest by chance he might ordain or teach anything concerning these matters otherwise than that which was in accordance with the rite of the universal Church, it came into his mind to visit Bishop Malchus, that he might give him fuller information on all points. He was an old man, full of days and virtues, and the wisdom of God was in him. He was of Irish nationality, but had lived in England in the habit and rule of a monk in the monastery of Winchester, from which he was promoted to be bishop in Lismore, a city of Munster, and one of the noblest of the cities of that kingdom. There so great grace was bestowed upon him from above that he was illustrious, not only for life and doctrine, but also for signs. Of these I set down two as examples, that it may be known to all what sort of preceptor Malachy had in the knowledge of holy things. He healed a boy, who was troubled with a mental disorder, one of those who are called lunatics, in the act of confirming him with the holy unction. This was so well known and certain that he soon made him porter of his house, and the boy lived in good health in that office till he reached manhood. He restored hearing to one who was deaf; in which miracle the deaf person acknowledged a wonderful fact, that when the saint put his fingers into his ears on either side he perceived that two things like little pigs came out of them. For these and other such deeds, his fame increased and he won a great name; so that Scots and Irish flowed together to him and he was reverenced by all as the one father of all.