Skip to content
HomeBlessed Virgin MaryInto the House of the Lord 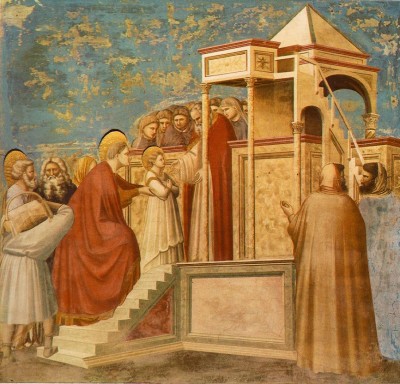 Secundum Verbum Tuum
In the hidden recesses of the old Temple, the Holy Ghost prepares the new Temple, the all-holy Virgin, to become the Mother of God . Destined to be the living Temple of the Word, Mary dwells in the Temple of the Old Dispensation. She hears the chanting of the psalms, the prophets, and the Law. Was it there that the Most Holy Virgin learned Psalm 118, the long litany of loving surrender to the Word? And was it from Psalm 118, held in her heart from so tender an age, that she drew her response to the message of the Angel, “Be it done unto me according to Thy Word” (Luke 1:38)?

There planted in the Lord, the dew of His Spirit made her flourish in the courts of her God, and like a green olive she became a tree, so that all the doves of grace came and lodged in her branches. (Saint John Damascene, Upon the Orthodox Faith, Book IV, ch. 15)

Virgin Mother of the Lamb
There Mary smells the fragrance of incense and burnt offerings. There she observes the faithful of Israel streaming towards Zion, filling the Temple, seeking the Face of the Lord. Priest, altar, and oblation are not unfamiliar to the Virgin who, gazing upon her Son, will recognize in Him the Eternal priest, the Altar of the New Covenant, the pure Victim, the holy Victim, the spotless Victim offered in unending sacrifice.

To Belong to God
In the seventeenth century — the age of France’s “mystical invasion” — the mystery of the Presentation of the Virgin in the Temple captivated the hearts of Monsieur Olier and of others on fire with zeal for the holiness of the priesthood, for the beauty of the consecrated life, and for the worthy praise of God. The so-called French School of spirituality, marked above all by the imperative of adoration and the virtue of religion, gravitated to the feast of November 21st as to the purest liturgical expression of the desire to be offered to God, to belong to God, and to abide in God’s house.

Virgo Sacerdos
When, in 1641, Jean-Jacques Olier (1608 – 1657) established the seminary of Saint-Sulpice, he placed it under the patronage of the Virgin Mary in the mystery of her Presentation in the Temple. The Child Mary, hidden in the Temple, learns the meaning of sacrifice and oblation; she is the sacerdotal Virgin, prepared by the Holy Ghost to stand at the altar of the Cross united to her Son, High Priest and immolated Lamb. Under the influence of the French Sulpicians, many religious congregations, established after the horrors of the French revolution, chose the feast of the Presentation of the Virgin Mary as their foundation day, the day of religious profession, and of the renewal of vows.

In Domum Regis
Today’s proper liturgical texts lead us after the Holy Child Mary into the mystery of the Temple. “The daughter of the King is clothed with splendour; she is led to the king with her maiden companions” (Psalm 44:14-15). Holy Mary fills her eyes with the splendours of the Temple and there discovers the beauty of belonging to God alone in the splendour of holiness. Even today, she draws others after her. “Listen, O daughter, give ear to my words. . . . So will the King desire thy beauty” (Psalm 44:11-12).

Lovely and Pure in the Sight of God
In all her beauty and innocence the Child Mary stands before us to tell us that we, like her, are called to be lovely and pure in the sight of God. We are the object of His desire. “Blessed be the God and Father of our Lord Jesus Christ, who hath blessed us with spiritual blessings in heavenly places, in Christ: As he chose us in Him before the foundation of the world, that we should be holy and unspotted in his sight in charity” (Ephesians 1:3-4). The Father would have us abide in the inner recesses of the Temple of the Mystical Body of His Son, listening to His Word, and singing His praises in the sweetness of the Holy Ghost.