Skip to content
HomeFátimaFor you, too, I have a destiny and a hope 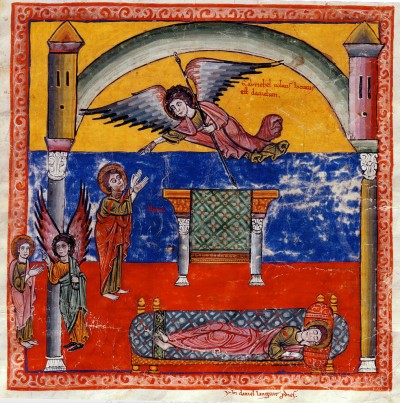 The Temple: Heart of the World
Today’s Gospel is part of a bigger discourse in which Our Lord prophesies the destruction of the Solomon’s magnificent temple in Jerusalem. The whiteness of its marble walls glistened in the light; the gold tiles of its roof reflected the splendour of the sun. The pungent fragrance of its sacrifices filled the air. The sound of the divine praises resounded in its precincts. The temple was the unshakeable foundation and the pulsating heart not merely of Jerusalem, but of the world. The world existed for the temple, and the temple held the world together.

The End of the World
And yet Our Lord says, “Do you see all this? Believe me, there will not be a stone left on another in this place, it will all be thrown down” (Matthew 24:2). The disciples were appalled by Our Lord’s words. How could this be? The destruction of the temple would mean the end of the world as they knew it, for the world as they knew it could no more live without the temple than a man’s body without a heart. One understands, then, why the disciples were so disconcerted by what Our Lord said. And so, “they came to him privately, and said, Tell us, when will this be? And what sign will be given of thy coming, and of the world being brought to an end?” (Matthew 24:3). Designedly did Our Lord bring together in one single discourse the end of the temple and the end of the world. The one is an image and a prophecy of the other.

Visions of Things to Come
We, for our part, are very much like the disciples who went to Our Lord asking for more information, for an explanation, for a more precise forecast of the things to come. Our Lord warned the disciples then, as today He warns us, not to be deceived by imposters and false prophets, nor troubled by tidings of war and the rumours of war. It is enough that we should be aware that, on the day and in the hour appointed by God, the world as we know it will come to an end, just as surely as my life and yours, as we know it, will come to an end in the hour of our death.

Daniel’s Lineage
To be sure there are holy men and women to whom God has given visions of things to come. The prophet Daniel to whom it was given to see visions in the night, even of “one like the Son of Man coming with the clouds of heaven” (Daniel 7:13) has his lineage in the saints and mystics of the Church graced, as he was, with visions and prophecies. Such things, of course, are to be read with an extreme discretion and prudence, lest an unhealthy curiosity overtake the sobriety of faith, and the Confuser (that is the devil) sow the weeds of inner turmoil where the Holy Ghost would sow only the seeds of confidence in God and the hope of everlasting life.

The Four Last Things
There is, I think, great wisdom in the liturgy’s attribution of a Gospel that speaks of the end of the world to this last Sunday before Advent. It brings before our eyes, in one powerful synthesis the four last things that we so easily forget or, at least, try to put out of mind, because they point to our own mortality. What are the four last things? They are: death, judgment, heaven, and hell. The Catechism puts it succinctly:

Each man receives his eternal retribution in his immortal soul at the very moment of his death, in a particular judgment that refers his life to Christ: either entrance into the blessedness of heaven — through a purification or immediately, or immediate and everlasting damnation. (CCC, 1022).

The Way of Saint Benedict
In Chapter IV of the Holy Rule, our father Saint Benedict enjoins us to live with a sober awareness of the same four last things:

44. To fear the Day of Judgment.
45. To be in dread of hell.
46. To desire with a special longing everlasting life.
47. To keep death daily before one’s eyes.

The Way of the World
Compare Saint Benedict’s four injunctions with the way most people live. They have no fear of the Day of Judgment and no dread of hell. They hardly desire heaven with special longing, and they do whatever they can to avoid keeping death before their eyes. This the way of the world. This is the foundation of the whole industry of entertainment, distraction, pleasure, and pornography . . . as if by keeping oneself amused, by not thinking of death, by squeezing whatever fleeting gratification one can out of passing things, and by looking leeringly at  human flesh, one can keep death at bay. The man who loses sight of the four last things risks frittering away the short span of life allotted to him in time. The psalmist says:

Swift as a breath our lives pass away. What is our span of days? Seventy years it lasts, eighty years, if lusty folk we be; for the more part, toil and frustration; years that vanish in a moment, and we are gone. (Psalm 89:9–10)

In another place the psalmist reflects on the fate of the glamorous types upon whom the world smiles so approvingly, and asks himself what will become of them in the end:

I set myself to read the riddle, but it proved a hard search, until I betook myself to God’s sanctuary, and considered, there, what becomes of such men at last. The truth is, thou art making a slippery path for their feet, ready to plunge them in ruin; in a moment they are fallen, in a storm of terrors vanished and gone. And thou, Lord, dost rise up and brush aside all their imaginings, as a waking man his dream. (Psalm 72:16–20)

Fatima
Is it not extraordinary that the Mother of God who appeared to three little children in Portugal in 1917 should have given them so profound an insight into the four last things? What does one find in the conversations of the Mother of God with Lucia, Francisco, and Jacinta? One finds allusions to death, judgment, purgatory, heaven, and hell. In speaking of these things, Our Lady of Fatima was simply making herself the children’s catechist. With sober words and vivid images — even of the reality of hell — the Mother of God taught the little shepherds what the Church would teach all us by means of the sacred liturgy and the Catechism. Too many people fail to see that the events of Fatima were, in fact, a catechesis from heaven, a catechesis that began in prayer, unfolded in prayer, and leads to prayer. Prayer alone obtains from God the light by which we can begin to see all things rightly: things past, things present, and things to come.

The Liturgy
So long as we are on this earth, the liturgy of the Church is our unfailing school of prayer. The liturgy — Holy Mass, the Divine Office, and the Sacraments — puts us in possession of the very prayer by which we are divinely enabled to die a holy death, to face judgment with confidence in the mercy of God, to anticipate by grace the light of heaven, and to avoid hell. One who prays with the Church, using the words and gestures she gives us, enters into the great catechesis that prepares souls for heaven. And, then, one will face death with serenity because the liturgy will have opened one’s heart to those reassuring words of the Lord who, again today, says to each one:

I have not lost sight of my plan for you, and it is your peace I have in mind, not your undoing; for you, too, I have a destiny and a hope. (Jeremiah 29:11)