My Immaculate Heart Will Triumph

Today is the 98th anniversary of the sixth and last apparition of Our Lady of the Rosary at Fatima on 13 October 1917. Twelve years ago, Saint John Paul II, singularly devoted to the Virgin of Fatima, declared a Year of the Rosary. In his Apostolic Letter on the Rosary, Saint John Paul II called it “a prayer of great significance, destined to bring forth a harvest of holiness.”

The Rosary is a presence of Mary, the Refuge of Sinners, saying to us in a still, small voice what Saint Benedict says in Chapter IV of the Holy Rule, “Child, never despair of God’s mercy.” She is Mater Misericordiae, the Mother of Mercy. Where Mary goes the mercy of God follows bringing forgiveness, healing, reconciliation, and peace. If you would know the mercy of God, seek to know the Mother of Mercy. She preserves sinners from the one sin that is greater than all other sins put together, that of despairing of the mercy of God.

By making “Never to despair of God’s mercy” the last of the Instruments of Good Works in Chapter Four of the Holy Rule, Saint Benedict is saying to us, “Even if you fail in all else, even if you fall into grievous sin, hold fast to this and you will not be disappointed in your hope.” In the Salve Regina, Mary is called not only Mater misericordiae but also spes nostra. The Rosary is a childlike and humble way of putting our hand in the hand of the Mother of God lest we slip into discouragement and, from discouragement, fall into the pit of despair.

The Face of Christ

The feast of Our Lady of Fatima compels us to ask ourselves if, with the passing years, Saint John Paul II’s Year of the Rosary has become no more than a distant memory, something vague and without bearing on our lives. The Rosary — a prolonged contemplation of the Face of Christ in the company of Mary — opens us to the mystery of Our Lord’s word on the night before suffered: “He who has seen me has seen the Father” (Jn 14:9). If you would see Christ, pray the Rosary. If you would see the glory of the Father shining on the Face of the Son, pray the Rosary. 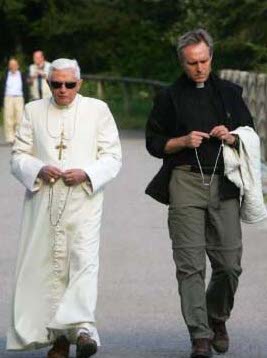 The Fragrance of the Knowledge of Christ

Do I persevere in the simple but sometimes difficult prayer of the Rosary, or I do I give in to discouragement, laziness, indifference, or routine? Where is the Rosary in my own moments of joy, light, sorrow, and glory? And where is my life in the context of the joys, lights, sorrows, and glories of Christ and of his holy Mother? Like his predecessor Saint John Paul II, Pope Benedict XVI was not ashamed to unite himself to little ones the world over who, in simplicity of heart and poverty of spirit, love the Rosary and in praying it breathe in the fragrance of the knowledge of Christ (cf. 2 Cor 2:14).

Our Lady of Fatima’s message was a call to prayer and to penitence. To prayer first, and then to penitence: this because prayer, especially the humble prayer of the Rosary softens even the most hardened heart, decapitates pride, and makes penitence possible. The grace of conversion of heart is given to those who pray for it, and for this there is no better prayer than the Rosary. One does not first change one’s way of life and then begin to pray. One prays first — and sometimes for a very long time — in order to be able to receive the grace of inner conversion for oneself or even for another.

For me, what I find most beautiful about the Rosary is that sinners are comfortable praying it. It is a chain that, with each “Hail Mary,” binds the heart more strongly to its treasure (cf. Mt 6:21). One need not be perfect to pray the Rosary; one need only be capable of saying again and again, “pray for us sinners now and at the hour of our death.”

The Rosary is, I said, a simple prayer. That does not mean that it is always easy. At certain times in life, one must be content with what I call “the poor man’s Rosary.” This may mean that when you are weary, discouraged, and unable to focus, you content yourself with saying a little phrase on each bead instead of the whole prescribed prayer: just “Hail, Mary, full of grace,” or just “Blessed are you among women and blessed is the fruit of your womb, Jesus,” or just, “Pray for us sinners now and at the hour of our death.” Do you think that Our Lady is less pleased with the humble, incomplete stammerings of a little child than with the perfect recitation of one who, by the grace of God, can do more? Many a sleepless night has been filled with the murmurings of the “poor man’s Rosary” and in that humble prayer the Mother of God finds an immense joy.

A Path to Contemplation

The Rosary is the simplest and most accessible of prayers. It is, at the same time, a sure path to contemplation, leading ever more deeply, almost imperceptibly, into the stillness of the Most Holy Trinity. The Rosary is a way of abiding with Mary in the radiance of the Eucharistic Face of Jesus. It is a way into the ceaseless prayer of the heart that is an evangelical precept addressed to all: “Jesus told them a parable to the effect that they ought always to pray and not lose heart” (Lk 18:1). Do that and you will be “filled with joy and with the Holy Spirit” (Ac 13:52). Our Lady of Fatima promises it.

The lovely image of Our Lady of Fatima appearing to the three children is the work of Sister Mary of the Compassion, O.P. Born Constance Mary Rowe on March 17, 1908, she was baptized at the famous Brompton Oratory. Constance Mary Rowe won an international art award, the Prix de Rome, in 1932. In 1935 she left England for New York City, where she had accepted a number of commissions; among them was a drawing of the Dominican Saint Martin de Porres. Constance Mary Rowe was never to return to her beloved England. In 1937 she made profession as a Cloistered Dominican Sister of the Perpetual Rosary at the “Blue Chapel” in Union City, New Jersey. While I had seen her work and read about her in Jubilee magazine, I had the privilege of meeting Sister Mary of the Compassion only shortly before her death in 1977. The “Blue Chapel” Monastery is now closed.