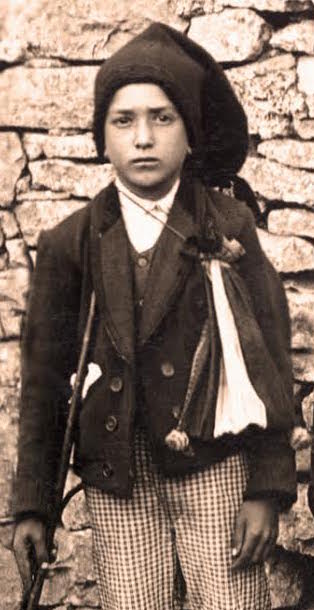 Blessed Francisco of Fatima
While in Fatima last week, D. Finnian and I had the opportunity to visit with Dr Ângela de Fátima Coelho da Rocha Pereira da Silva, the wonderfully affable postulator of the Cause of the Little Shepherds of Fatima.  Sister Angela is a religious of the Aliança de Santa Maria and a medical doctor; she was nominated Postulator extra urbem on 1 November 2009, then Postulator in urbe on 22 June 2012. I shared with the Postulator my own devotion to Blessed Francisco, the Consoler of the Hidden Jesus.

Consoler of the Hidden Jesus
The words of the Angel of Fatima,  “Console your God”,  engraved themselves in young Francisco’s heart. They became the compelling inspiration of his short life of eleven years (1908–1919). Francisco wanted, more than anything else, to be the Consoler of the Hidden Jesus. He did this by praying rosary after rosary, and by spending hours close to the tabernacle of the parish church.

Many Rosaries
Readers familiar with the story of Fatima will recall that on 13 May 1917, after hearing the Lady say, “I come from heaven”, Lucia asked if she and her little companions would go to heaven. The Lady replied that both Lucia and Jacinta would go to heaven , but that Francisco would need to say many rosaries first.

This enigmatic utterance concerning Francisco has, over the years, given rise to a certain amount of speculation as to its meaning. Various interpretations have been ascribed to it, but I found none of them satisfying. Some commentators even suggested that Francisco was somehow held back in his spiritual development and, therefore, needed more prayer than his sister Jacinta and his cousin Lucia.

Francisco: A Contemplative Soul
I put the question to Dr Coelho,. She explained that while little Jacinta was an extrovert, easily engaging with others and concerned in reaching out to all, especially to poor sinners, Francisco was a very interior soul, focused on God alone or, as he himself put it, on consoling the Hidden Jesus. In this way, the personalities and graces of Francisco and Jacinta are complementary. Jacinta is emblematic of the missionary impulse of the Church, while Francisco illustrates the call to the hidden life and total dedication to the “One Thing Necessary” (Luke 10:42). Francisco, explained Dr Coelho, was, from the very beginning of the apparitions, singled out as a contemplative soul.

The Postulator explained that had Our Lady said that Francisco was to become a “contemplative soul”, the meaning of her words would have completely escaped Francisco’s understanding. His was the simple vocabulary of a child, of a boy accustomed to the concrete realities of nature. Our Lady’s words that Francisco would “need to say many rosaries” before going to heaven was, in effect, her way of saying that Francisco was to become an entirely contemplative soul before going to heaven, and this by means of many rosaries. Understand by this that, for Francisco and for most ordinary people, many rosaries are the most simple and efficacious way to union with God.

Praying Much
I am reminded of something I read many years ago in that marvelous little book on the rosary by Père Jean Lafrance (1931–1991), Le chapelet, in English, The Rosary: A Road to Constant Prayer. Père Lafrance maintained that if one cannot pray well, one ought to pray much. He went so far as to say that in prayer, for certain souls, at least, quantity might well make up for intensity. Père Lafrance emphasised the sacrificial quality of time spent for God’s sake alone, time wasted, as it were, on attending to God. He held that the investment of time was, in itself, an act of faith, hope, and charity, and that one who begins by praying much will, in the end, pray well, very well.

Our Lady’s Pedagogy
This is, I think, the pedagogy behind Our Lady’s words to Blessed Francisco. To pray many rosaries is to pray much, and he who prays much will, by the secret operation of the Holy Ghost in the depths of the soul, attain to that prayer of the heart that Saint John Cassian called fiery. This is the prayer of those who,

. . . having already torn from their hearts the penal thorn of conscience, now, free from care, consider with a most pure mind the kindnesses and mercies of the Lord that he has bestowed In the past, gives in the present, and prepares for the future, and are rapt by their fervent heart to that fiery prayer which can be neither seized nor expressed by the mouth of man. (Saint John Cassian, Conference IX On Prayer, Chapter 15)