Skip to content
HomeBlessed Virgin MaryAt Fatima: with a heart vigilant in prayer 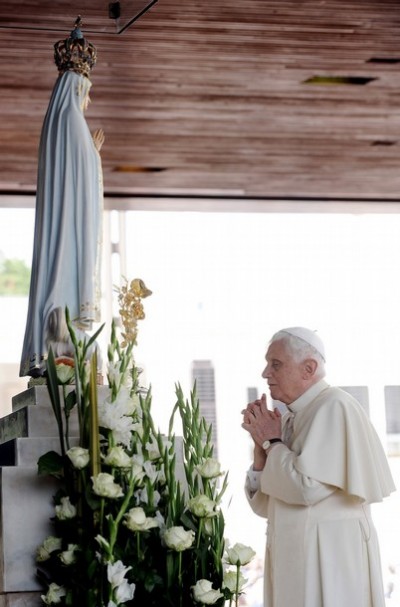 Come to Fatima to Pray

Dearly beloved brothers and sisters, I too have come as a pilgrim to Fatima, to this “home” from which Mary chose to speak to us in modern times. I have come to Fatima to rejoice in Mary’s presence and maternal protection. I have come to Fatima, because today the pilgrim Church, willed by her Son as the instrument of evangelization and the sacrament of salvation, converges upon this place. I have come to Fatima to pray, in union with Mary and so many pilgrims, for our human family, afflicted as it is by various ills and sufferings. Finally, I have come to Fatima with the same sentiments as those of Blessed Francisco and Jacinta, and the Servant of God Lúcia, in order to entrust to Our Lady the intimate confession that “I love” Jesus, that the Church and priests “love” him and desire to keep their gaze fixed upon him as this Year for Priests comes to its end, and in order to entrust to Mary’s maternal protection priests, consecrated men and women, missionaries and all those who by their good works make the House of God a place of welcome and charitable outreach …

Yes! The Lord, our great hope, is with us. In his merciful love, he offers a future to his people: a future of communion with himself. After experiencing the mercy and consolation of God who did not forsake them along their wearisome return from the Babylonian Exile, the people of God cried out: “I greatly rejoice in the Lord, my whole being exults in my God” (Is 61:10). The resplendent daughter of this people is the Virgin Mary of Nazareth who, clothed with grace and sweetly marvelling at God’s presence in her womb, made this joy and hope her own in the canticle of the Magnificat: “My spirit rejoices in God my Saviour”. She did not view herself as a fortunate individual in the midst of a barren people, but prophecied for them the sweet joys of a wondrous maternity of God, for “his mercy is for those who fear him from generation to generation” (Lk 1:47, 50).

This holy place is the proof of it. In seven years you will return here to celebrate the centenary of the first visit made by the Lady “come from heaven”, the Teacher who introduced the little seers to a deep knowledge of the Love of the Blessed Trinity and led them to savour God himself as the most beautiful reality of human existence. This experience of grace made them fall in love with God in Jesus, so much so that Jacinta could cry out: “How much I delight in telling Jesus that I love him! When I tell him this often, I feel as if I have a fire in my breast, yet it does not burn me”. And Francisco could say: “What I liked most of all was seeing Our Lord in that light which Our Mother put into our hearts. I love God so much!” (Memoirs of Sister Lúcia, I, 42 and 126).

To the Eyes of our Heart

Brothers and sisters, in listening to these innocent and profound mystical confidences of the shepherd children, one might look at them with a touch of envy for what they were able to see, or with the disappointed resignation of someone who was not so fortunate, yet still demands to see. To such persons, the Pope says, as does Jesus: “Is not this the reason you are wrong, that you know neither the Scriptures nor the power of God?” (Mk 12:24). The Scriptures invite us to believe: “Blessed are those who have not seen and yet have come to believe” (Jn 20:29), but God, who is more deeply present to me than I am to myself (cf. Saint Augustine, Confessions, III, 6, 11) – has the power to come to us, particularly through our inner senses, so that the soul can receive the gentle touch of a reality which is beyond the senses and which enables us to reach what is not accessible or visible to the senses. For this to happen, we must cultivate an interior watchfulness of the heart which, for most of the time, we do not possess on account of the powerful pressure exerted by outside realities and the images and concerns which fill our soul (cf. Theological Commentary on The Message of Fatima, 2000). Yes! God can come to us, and show himself to the eyes of our heart.

In the Night of Doubt and Uncertainty

Moreover, that Light deep within the shepherd children, which comes from the future of God, is the same Light which was manifested in the fullness of time and came for us all: the Son of God made man. He has the power to inflame the coldest and saddest of hearts, as we see in the case of the disciples on the way to Emmaus (cf. Lk 24:32). Henceforth our hope has a real foundation, it is based on an event which belongs to history and at the same time transcends history: Jesus of Nazareth. The enthusiasm roused by his wisdom and his saving power among the people of that time was such that a woman in the midst of the crowd – as we heard in the Gospel – cried out: “Blessed is the womb that bore you, and the breasts that nursed you!”. And Jesus said: “Blessed rather are those who hear the word of God and obey it!” (Lk 11:27-28).

But who finds time to hear God’s word and to let themselves be attracted by his love? Who keeps watch, in the night of doubt and uncertainty, with a heart vigilant in prayer? Who awaits the dawn of the new day, fanning the flame of faith? Faith in God opens before us the horizon of a sure hope, one which does not disappoint; it indicates a solid foundation on which to base one’s life without fear; it demands a faith-filled surrender into the hands of the Love which sustains the world.

Sacrifices for the Conversion of Sinners

“Their descendants shall be known among the nations, […] they are a people whom the Lord has blessed” (Is 61:9) with an unshakable hope which bears fruit in a love which sacrifices for others, yet does not sacrifice others. Rather, as we heard in the second reading, this love “bears all things, believes all things, hopes all things, endures all things” (1 Cor 13:7). An example and encouragement is to be found in the shepherd children, who offered their whole lives to God and shared them fully with others for love of God. Our Lady helped them to open their hearts to universal love. Blessed Jacinta, in particular, proved tireless in sharing with the needy and in making sacrifices for the conversion of sinners. Only with this fraternal and generous love will we succeed in building the civilization of love and peace.

We would be mistaken to think that Fatima’s prophetic mission is complete. Here there takes on new life the plan of God which asks humanity from the beginning: “Where is your brother Abel […] Your brother’s blood is crying out to me from the ground!” (Gen 4:9). Mankind has succeeded in unleashing a cycle of death and terror, but failed in bringing it to an end… In sacred Scripture we often find that God seeks righteous men and women in order to save the city of man and he does the same here, in Fatima, when Our Lady asks: “Do you want to offer yourselves to God, to endure all the sufferings which he will send you, in an act of reparation for the sins by which he is offended and of supplication for the conversion of sinners?” (Memoirs of Sister Lúcia, I, 162).

Triumph of the Immaculate Heart of Mary

At a time when the human family was ready to sacrifice all that was most sacred on the altar of the petty and selfish interests of nations, races, ideologies, groups and individuals, our Blessed Mother came from heaven, offering to implant in the hearts of all those who trust in her the Love of God burning in her own heart. At that time it was only to three children, yet the example of their lives spread and multiplied, especially as a result of the travels of the Pilgrim Virgin, in countless groups throughout the world dedicated to the cause of fraternal solidarity. May the seven years which separate us from the centenary of the apparitions hasten the fulfilment of the prophecy of the triumph of the Immaculate Heart of Mary, to the glory of the Most Holy Trinity.