Skip to content
HomeBlessed Virgin MaryCorrespondence on the Monastic Vocation 6 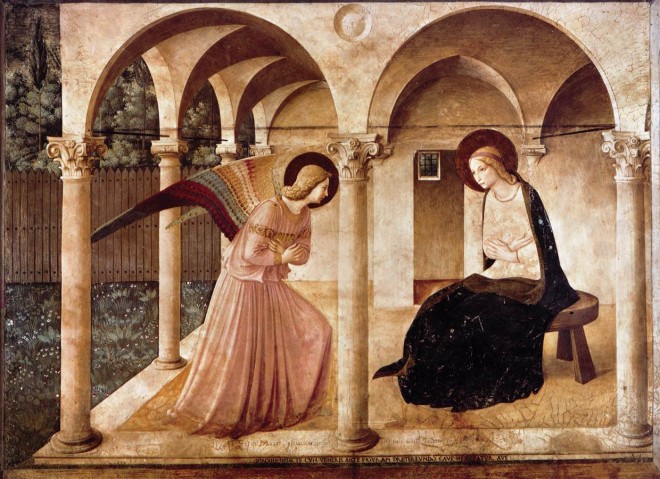 Disclaimer: The series of letters entitled “Correspondence on the Monastic Vocation”, while based on the real questions of a number of men in various places and states of life, is entirely fictitious. Any resemblance to actual persons, institutions, or places is purely coincidental.

You asked me about the place of the Blessed Virgin Mary in our life at Silverstream. This is something about which I could write volumes without ever saying enough and without ever saying too much. “De Maria numquam satis”. Our Lady reveals herself to those who seek her. She answers those who call upon her name. She enters the lives of those who open to her the door of their hearts.

I love them that love me: and they that in the morning early watch for me, shall find me. . . Blessed is the man that heareth me, and that watcheth daily at my gates, and waiteth at the posts of my doors. He that shall find me, shall find life, and shall have salvation from the Lord. (Proverbs 8:17, 34–35)

Every time I read the Prologue of the Rule of Saint Benedict, I seem to discover in it a portrait of the Blessed Virgin Mary. It is a portrait that does not come into focus all at once, but only over the course of time. I suppose that it helps to meditate the Rule with rosary in hand, something I learned to do many years ago when, quite by chance, I came upon a little booklet containing passages from the Holy Rule arranged to correspond to the mysteries of the rosary.

Some would argue that, because the Blessed Virgin Mary is nowhere mentioned in the Rule of Saint Benedict, one should not read her into it. I, on the other hand, would argue that Our Lady has left the fragrance that is unmistakably hers on every page of the Holy Rule, from the first to the last. All of the mysteries of the Blessed Virgin find a mystic correspondence in the Rule of Saint Benedict: obedience, silence, humility, praise, charity, mercy, self–offering, and glory.

What Gerard Manley Hopkins writes in his poem, “The Blessed Virgin Compared to the Air We Breathe”, is perfectly applicable to the Rule of Saint Benedict. We monks are meant to share Mary’s life as life does air.

I say that we are wound
With mercy round and round
As if with air: the same
Is Mary, more by name.
She, wild web, wondrous robe,
Mantles the guilty globe,
Since God has let dispense
Her prayers his providence:
Nay, more than almoner,
The sweet alms’ self is her
And men are meant to share
Her life as life does air.

The Prologue of the Holy Rule begins on a distinctively Marian note: “Hearken, O my son, to the precepts of thy Master, and incline the ear of thine heart”. Behind Saint Benedict’s text, the liturgical ear hears that verse of Psalm 44 that the Church delights in applying to Our Lady:

Hearken, O daughter, and see, and incline thy ear: and forget thy people and thy father’ s house. And the king shall greatly desire thy beauty. (Psalm 44:11–12) 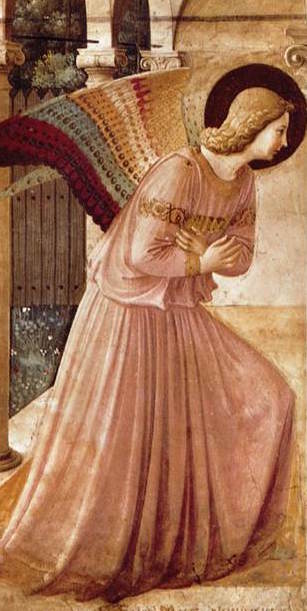 The best commentary in the world on the beginning of the Prologue of the Holy Rule was written not by a Benedictine, but by a Dominican, a Friar Preacher. One, who would grasp from the heart what Saint Benedict is saying, need only tarry before Blessed Angelico’s depictions of the Annunciation. (I think that a pilgrimage to San Marco in Florence is a most desirable part of the complete Benedictine’s education!) There one will find the soul of the Prologue of the Holy Rule.

The Archangel Gabriel bears the Word from on high: the very Word of whom Saint Thomas Aquinas sings in his magnificent hymn for Lauds of the Office of Corpus Domini.

The Heavenly Word proceeding forth,
yet not leaving the Father’s side,
went forth upon His work on earth
and reached at length life’s eventide.

The Word arrives in silence. “For while all things were in quiet silence, and the night was in the midst of her course, Thy almighty word leapt down from heaven from thy royal throne” (Wisdom 18:14–15).

Look at the Archangel; his whole being expresses silence before the mystery of the Word he has been charged to announce. And here, in this painting, Our Lady is, in her whole person, the icon of the monk such as Saint Benedict would have him be: “Maria, regula monachorum”. 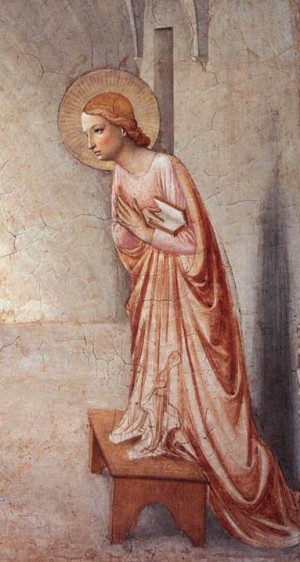 Our Lady is inclining the ear of her heart; she is leaning forward, all intent, so as to receive the Word. In one hand, the Virgin holds the book of the Sacred Scriptures, marking with her thumb the place where Isaias prophecies: “Behold a virgin shall conceive, and bear a son, and his name shall be called Emmanuel” (Isaias 7:14). She passes from the word to the Word. In this moment, Mary consents to forsake all things for the sake of the Word, and in this moment, God “greatly desires her beauty” (Psalm 44:12).

Chapter V of the Holy Rule treats of obedience. A monk learns obedience in the school of the Virgin, he lives it under her guidance, and then, almost imperceptibly, he discovers that he is able to say with the Blessed Virgin Mary at every moment, and in all things, “Behold the handmaid of the Lord; be it done to me according to thy word” (Luke 1:38).

Chapter VI of the Holy Rule treats of silence. The Mother of God teaches silence to the man who tarries in her presence, to the man who is not afraid to spend time “telling his beads” and pondering the mysteries of Christ. Over time, a monk begins to understand what Saint Luke means when, in his Gospel, he shows us Mary, “keeping all these words, pondering them in her heart” (Luke 2:19).

Chapter VII of the Holy Rule treats of humility. It is the essence of Saint Benedict’s teaching. It is to the Holy Rule what the Song of the Suffering Servant is to the Prophet Isaiah, and what the accounts of the Passion of the Lord are to the Holy Gospels. It is to the Holy Rule what the sublime canticle of Philippians 2:6–11 is to the writings of Saint Paul. Chapter VII is best learned by opening one’s innermost life and thoughts to Mary, even as the Apostle Saint John did: “After that, he saith to the disciple: Behold thy mother. And from that hour, the disciple took her to his own” (John 19:27). The man who lives with Mary, day in and day out, begins to  understand the meaning of old Simeon’s mysterious prophecy: “And thy own soul a sword shall pierce, that, out of many hearts, thoughts may be revealed” (Luke 2:35).

Chapter VIII of the Holy Rule is but the beginning of a long cascade of Chapters describing in detail the “Opus Dei”, the Divine Office. It is in Chapter VIII that Saint Benedict’s sons pass over from the depths of the kenosis of the Lord into the heights of His glorious priesthood in the heavenly sanctuary.  There, at his right side, stands the Queen, his Mother, the humblest of Virgins, the Virgin of the pierced heart, in garments of celestial gold. There she sings eternally, in concert with her Son, the Word, the canticle she intoned in the hill country, in a city of Juda: “My soul doth magnify the Lord. And my spirit hath rejoiced in God my Saviour. Because he hath regarded the humility of his handmaid” (Luke 1:46–47).

Though few may recognize it as such, Flynn, the Benedictine vocation is essentially Marian, and because it is essentially Marian, it is wholly ecclesial. The monk, as our father Saint Benedict would have him be, is  — with Mary and with the Church, in Mary and in the Church — a mirror of the mystery of Christ, and this, by the gentle and hidden work of the Divine Iconographer, the Holy Ghost, in his heart. “We all”, says the Apostle, “beholding the glory of the Lord with open face, are transformed into the same image from glory to glory, as by the Spirit of the Lord” (2 Corinthians 3:18).

All 73 chapters of the Holy Rule are mysteriously contained in the first verse of the Prologue. For one with eyes to see, and with ears to hear, the Rule of Saint Benedict wondrously fulfils the yearning of the Bridegroom in the Song of Songs: “Shew me thy face, let thy voice sound in my ears: for thy voice is sweet, and thy face comely” (Canticle 2:14). “Maria, regula monachorum”; Mary is the pattern of monks.

I hope that you find these thoughts helpful, Flynn. It was helpful for me to think them through and write them out for you.