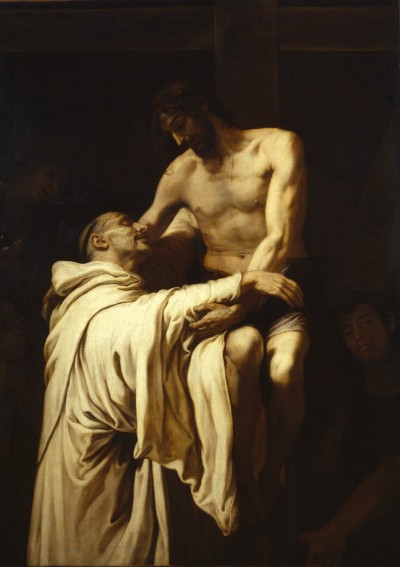 Monks should love silence at all times, but especially during the hours of the night. Therefore, on all days, whether of fasting or otherwise, let them sit down all together as soon as they have risen from supper (if it be not a fast-day) and let one of them read the Conferences [of Cassian], or the lives of the Fathers, or some thing else which may edify the hearers. Not, however, Heptateuch, nor the Books of Kings for it will not profit those of weak understanding to hear those parts of Scripture at that hour *: they may, however, be read at other times. If it be a fast-day, then a short time after Vespers let them assemble for the reading of the Conferences, as we have said; four or five pages being read, or as much as time alloweth, so that during the reading all may gather together, even those who may have been occupied in some work enjoined them. Everyone, then, being assembled, let them say Compline; and when that is finished, let none be allowed to speak to any one. And if any one be found to evade this rule of silence, let him be subjected to severe punishment; unless the presence of guests should make it necessary, or the Abbot should chance to give any command. Yet, even then, let it be done with the utmost gravity and moderation.

The first sentence of Chapter XLII is, I think, the most telling of Saint Benedict’s own spirit and of his desire for us. “Monks should love silence at all times, but especially during the hours of the night”. For our father Saint Benedict, silence is something to be prized, something cherished. The Latin text gives, Omni tempore silentium debent studere monachi, maxime tamen nocturnis horis. The verb studere means to desire or to be eager for something. It can also mean to apply oneself to something.

The chapter begins with the words omni tempore. This is a phrase familiar to all of us because we sing it so often in the Short Responsory at Vespers: Benedícam Dóminum * In omni témpore. A monk is a man who blesses God at all times and applies himself to silence at all times. We prize silence because, as the Christmas liturgy tells us, it was “while all things were in silence” that the Almighty Word leapt down from his heavenly royal throne:

For while all things were in quiet silence, and the night was in the midst of her course, Thy almighty word leapt down from heaven from thy royal throne, as a fierce conqueror into the midst of the land of destruction. (Wisdom 18:14–15)

If we are lovers of silence, it is because the Word still leaps down from His royal throne to visit us i those hours when all is silent, and in those places where all is silent. Live in expectation of the visitations of the Word and, to make this expectation tangible and real, practice silence. Saint Bernard spoke unforgettably of being visited by the Word. It was Saint Bernard’s practice of silence that disposed him to receive these mysterious visits or fleeting passages of the Word. Listen, then, to the Abbot of Clairvaux:

I admit that the Word has also come to me – I speak as a fool – and has come many times.  But although he has come to me, I have never been conscious of the moment of his coming.  I perceived his presence, I remembered afterwards that he had been with me; sometimes I had a presentiment that he would come, but I was never conscious of his coming or his going.  And where he comes from when he visits my soul, and where he goes, and by what means he enters and goes out, I admit that I do not know even now; as John says: ‘You do not know where he comes from or where he goes.’  There is nothing strange in this, for of him was it said, ‘Your footsteps will not be known.’  The coming of the Word was not perceptible to my eyes, for he has no color; nor to my ears, for there was no sound; nor yet to my nostrils, for he mingles with the mind, not the air; he has not acted upon the air, but created it.  His coming was not tasted by the mouth, for there was no eating or drinking, nor could he be known by the sense of touch, for he is not tangible.  How then did he enter?  Perhaps he did not enter because he does not come from outside?  He is not one of the things which exist outside us.  Yet he does not come from within me, for he is good, and I know that there is no good in me.  I have ascended to the highest in me, and look!  the word is towering above that.  In my curiosity I have descended to explore my lowest depths, yet I found him even deeper.  If I looked outside myself, I saw him stretching beyond the furthest I could see; and if I looked within, he was yet further within.  Then I knew the truth of what I had read, ‘In him we live and move and have our being.’  And blessed is the man in whom he has his being, who lives for him and is moved by him.

You ask then how I knew he was present, when his ways can in no way be traced?  He is life and power, and as soon as he enters in, he awakens my slumbering soul; he stirs and soothes and pierces my heart, for before it was hard as stone, and diseased.  So he has begun to pluck out and destroy, to build up and to plant, to water dry places and illuminate dark ones; to open what was closed and to warm what was cold; to make the crooked straight and the rough places smooth, so that my soul may bless the Lord, and all that is within me may praise his holy name.  So when the Bridegroom, the Word, came to me, he never made known his coming by any signs, not by sight, not by sound, not by touch.  It was not by any movement of his that I recognized his coming; it was not by any of my senses that I perceived he had penetrated to the depths of my being.  Only by the movement of my heart, as I have told you, did I perceive his presence; and I knew the power of his might because my faults were put to flight and my human yearnings brought into subjection.  I have marvelled at the depth of his wisdom when my secret faults have been revealed and made visible; at the very slightest amendment of my way of life I have experienced his goodness and mercy; in the renewal and remaking of the spirit of my mind, that is of my inmost being, I have perceived the excellence of his glorious beauty, and when I contemplate all these things I am filled with awe and wonder at his manifold greatness.

But when the Word has left me, all these spiritual powers become weak and faint and begin to grow cold, as though you had removed the fire from under a boiling pot, and this is the sign of his going.  Then my soul must needs be sorrowful until he returns, and my heart again kindles within me – the sign of his returning.  When I have had such experience of the Word, is it any wonder that I take to myself the words of the Bride, calling him back when he has withdrawn?  For although my fervor is not as strong as hers, yet I am transported by a desire like hers.  As long as I live the word ‘return,’ the word of recall for the recall of Word, will be on my lips. As often as he slips away from me, so often shall I call him back.  From the burning desire of my heart I will not cease to call him, begging him to return, as if after someone who is departing, and I will implore him to give back to me the joy of his salvation, and restore himself to me.