Skip to content
HomeLent 2015What has God got to do with fasting? 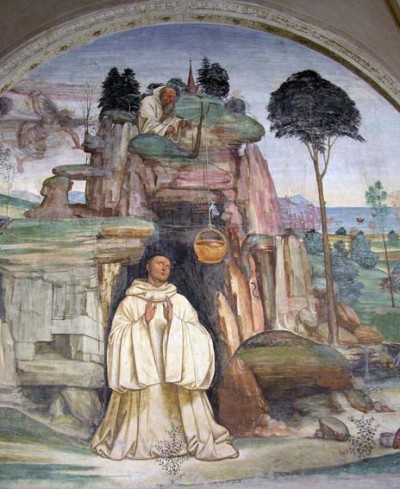 Just it is indeed and fitting, right and for our lasting good, that we should always and everywhere give thanks to thee, Lord, holy Father, almighty and eternal God; for by this bodily fasting thou dost curb vice and uplift the mind, bestowing upon us virtue and its rewards, through Christ our Lord. It is through him that thy majesty is praised by Angels, adored by Dominations, feared by Powers; through him that the heavens and the celestial Virtues join with the blessed Seraphim in one glad hymn of praise. We pray thee, let our voices blend with theirs, as we humbly praise thee. (Preface of Lent)

The Lenten Preface of the Mass declares that while we fast — which is itself a gift of God — God works through our fasting to do three things. The Preface says:

1) Thou dost curb vice;
2) uplift the mind;
3) bestow upon us virtue and its rewards.

Note that the Preface does not say that we, by our fasting, curb vice, uplift our minds, and lay hold of virtue of its rewards. The desire and resolve to fast are already God’s gracious gift to us. The threefold effect of fasting is likewise His work and His gift.

Vice is habitual sin. One has fallen into vice when one falls into the same repeatedly until the sin becomes habitual. Only God can deliver one out of the grip of vice. It is a delusion of pride to say to oneself: “I shall free myself from the grip of this vice by fasting”. Fasting simply disposes one to yield to the action of God by which the bonds of habitual sin are loosed. Not for nothing do we sing in the Short Responsory at Lauds during Lent, Ipse liberavit me de laqueo venantium, “He hath delivered me from the snare of the hunters” (Psalm 90:3). God is the deliverer. The hunters are the demons who never tire of laying snares for unsuspecting souls. The snare that holds one in its grip is vice, habitual sin. God lowers Himself even to the level of the snare in order to unfasten its hold on the sinner who has fallen into it. The more one struggles against certain vices, the tighter becomes their grip on the soul. There is great wisdom in remaining quite still while calling upon God to come to one’s rescue. Far from being a passive resignation to vice, this engages the will at the deepest level and fosters the virtue of hope.

Through fasting, God uplifts the mind. Acting through the fasting He inspires and makes possible, God cleanses the soul and lifts away the heaviness that keeps one from lifting the heart and mind to Him in prayer. The effect of fasting is not proportionate to its measure of severity. More often than not, little souls who can fast only in very little ways reap immense blessings because their confidence rests not in themselves but, rather, in the wonderful things wrought by God in those who hope in His mercy. One who fasts, even a little, according to the grace given him and with the blessing of the spiritual father, will find that prayer becomes easier because such fasting frees the soul from the heavy residue of sin that holds it earthbound and allows it to soar upward. The Sursum corda of Holy Mass is most suitably prepared by fasting.

Virtue and Its Rewards

Through fasting, God bestows upon us virtue and its rewards. Virtue is something God both bestows and rewards. Virtue — the repetition of good acts until, by dint of doing them over and over, they become habitual — is not the fruit of mere human industry. Virtue is the effect of a divine operation that gently bends the will to what is good, and so inflames the heart with the desire of what is beautiful, and the mind with yearning for what is true, that, little by little, one arrives at that love of God which, being perfect, castes out fear and, according to Saint Benedict’s doctrine, “begins to keep, without labour, and as it were naturally and by custom, all those precepts which he had hitherto observed through fear: no longer through dread of hell, but for the love of Christ, and of a good habit and a delight in virtue” (Holy Rule, Chapter VII).

The almost daily repetition of the Preface of Lent is a joyful confession of what God does in those faithful children of the Church who, quickened by grace, fast rightly. Those who fast rightly can hope to arrive at the end of Lent with hearts set free of vice, raised aloft in prayer, and wonderfully gladdened by virtue and its rewards.