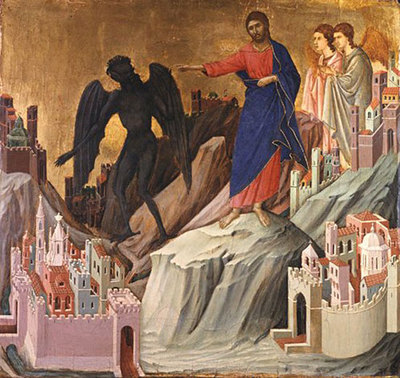 Draw Me After Thee

The First Sunday of Lent sets before us the mystery of Our Lord’s forty-day fast in the wilderness. But we are not here as spectators. We haven’t come to church to gaze on the temptations of Christ from a safe distance. We have been baptized into Christ, and so the mysteries of Christ are our mysteries. All that has happened to the Head must be embodied — played out — in us, His members. The Church borrows the words of the bride in the Song of Songs and addresses them to Christ. “Draw me after Thee,” she says, “let us make haste.” (Ct 1:4).

Christ in the Wilderness

The Voice of the Father

Saint Mark’s account of Our Lord’s temptation in the wilderness is short — only two verses — but it is packed with meaning. It follows his account of Jesus’ baptism: His going down into the Jordan and His coming up from the water; the heavens opening over His head and the Holy Spirit descending in the form of a dove; the voice of the Father saying: “Thou art my beloved Son; with Thee I am well pleased.” (Mk 1:11). The voice of the Father at Jesus’ baptism recalls the voice of the God speaking to Noah and his sons in the First Reading and, beyond that, it recalls the voice heard in the garden of paradise on the sixth day of creation: the voice of the Father after He had created man in his image and likeness. “And God saw everything that He had made, and behold, it was very good” (Gen 1:31).

In the beginning, Adam was the Father’s beloved son, the delight of His eyes, and Eve was full of grace, lovely in the eyes her Creator. In both of them the Father beheld, as in a mirror, the image of his Eternal Word, His only-begotten Son. And the Father was well pleased.

And then tragedy struck. Sin. Adam and Eve turned their backs on the One Who gave them life. They wanted to be “free” — the old lie — of the embrace of Love itself. Instead of raising their hands to the Giver of every good gift, they began to tighten their fists around the things that caught their eye or excited their pleasure. God created our first parents with their eyes on Him but, tempted and deceived by Satan, they chose to look away from the Face of God and to narrow their field of vision to themselves and to the things they wanted or thought they needed. And so, all of creation fell out of balance into chaos, out of harmony into strife, out of communion into division. And this was the great primeval tragedy: the original sin.

Into the Wastelands of Sin

How could Love remain silent when confronted with the wreckage of His creation? With the voice of one wounded by an unspeakable sorrow, trembling with the grief of a Creator spurned by his creatures, God said, “Adam, where are you?” (Gn 3:9) Then, Adam and Eve were driven out of Paradise into the wastelands of their sin, into a desert wilderness.

This is where today’s Gospel comes in. Saint Mark wants us to see Jesus as the New Adam. He makes a point of saying: “He was in the wilderness . . . and he was with the wild beasts.” (Mk 1:13). See the new Adam, driven into the desert wilderness in search of the old. Jesus goes alone into the desert of all our refusals of the Father’s Will to reclaim it by his obedience. He goes into the desert to make it flower again by His unconditional “Yes,” to purify it by His fasting, to irrigate it by His prayer, to render it fertile by His temptation, to vanquish it by His weakness, to make it a place of communion by His solitude, and a place of dialogue by His silence. Because Jesus is there, the barren wastes of the desert become the garden of the Father’s delight.

Christ regains, Christ reclaims the paradise that Adam lost. Christ is the new Adam. He is our new beginning. Christ took on our humanity, twisted and distorted by sin, so as to bring us all with Him back to the Father. Christ is the Warrior-Prince locked in hand-to-hand combat with the powers of darkness. He puts Himself in the front line. He goes before us through every temptation, through the illusions and deceits of Satan, through His bitter sufferings and Cross, to draw us after Him out of darkness into Light.

If you want to experience the grace of Lent this year, go boldly into the desert of your weakness, into the wilderness of your sins, into the wastelands of your fears and brokenness. Make a good Confession and do it soon. It is there that the Lord Jesus waits for you. He comes to meet us in our deserts in order to lead us back into The Garden. When you are lonely, when you are weak, when you have fallen into sin, the only way out is to remember that Jesus chose to experience the desert with us and that He awaits us there, to take us by the hand and lead us out.

Saint Athanasius tells us that when the great Saint Anthony of Egypt was living in the desert in fasting and prayer, the devil assaulted him with violent and frightening temptations. Anthony struggled and fought to the point of exhaustion. Soon after, Our Lord appeared to him. Bewildered, Anthony asked: “Why did you leave me alone in this desert waste to fight off the Evil One and struggle against his attacks?” Our Lord answered: “Anthony, you were not alone. I was invisibly present to you in your temptation and it is through Me and because of My grace that you came through your trial victorious.”

So it is in our lives. No matter how dark the night, no matter how terrifying the desert, no matter how miserable our weakness or how shameful our sins, Jesus Christ is invisibly present to save and deliver. “Christ . . . died,” said Saint Peter in our Second Reading, “the righteous for the unrighteous, that he might bring us to God.” (1 P 3 :18)

What begins in the confessional is perfected at the altar. In every celebration of the Holy Sacrifice of the Mass, Christ, Warrior and Prince, Priest and Victim brings us to God. Receive His Body and Blood and you will pass through Him and with Him out of the wastelands of sin into the Garden of the Father’s delight. In Paradise Lost the old Adam heard the grieving Father ask, “Adam, where are you?” (Gn 3:9). In the Mass — the very heart of Paradise Restored — the New Adam raises His voice to offer the Father the one answer He has been waiting for: “Father, the hour has come.” (Jn 17:1). And to the voice of the New Adam, a New Eve joins her voice: it is the voice of Mary His Virgin Mother. It is the voice of the whole Church, and in it the Father hears your voices and mine.

The Song of Songs asks two prophetic questions relevant to this First Sunday of Lent. “What is this coming up from the wilderness like a column of smoke, perfumed with myrrh and frankincense?” (Ct 3:6). We know the answer: it is the priestly prayer of Christ once tempted and forever victorious, ascending to the Father in this and every Holy Mass? And then, “Who is that coming up from the wilderness, leaning on her Beloved? ” (Ct 8:5) Again, we know the answer. It is the Church — all of us — ascending with Him to the Father. Lent is about more than going into the wilderness with Christ. It is about coming out of it, leaning on Christ, and sharing in His victory.

Fear not the wild beasts. The angels of God will minister to us even as they did to Him. And after forty days we will see our deserts irrigated by the Blood and Water flowing from His open side, and changed into gardens, for our joy and for the Father’s delight.