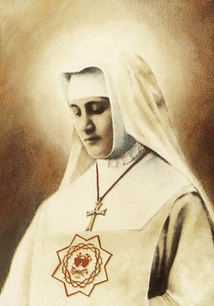 Yesterday, 27 February, was the dies natalis and liturgical memorial of Blessed Marie de Jésus Deluil Martiny. Born to upper middle class parents on May 28, 1841 in Marseille, Marie Deluil Martiny was the eldest of five children. She belongs to the vast family of saints and blesseds surrounding the Wounded Side and Sacred Heart of Jesus. Marie’s own spiritual genealogy included her great grand–aunt, the Venerable Anne–Madeleine Rémuzat (1696–1730), a Visitandine like Saint Margaret Mary Alacoque (1647–1690) and, like the saint of Paray–le–Monial, an ardent apostle of the Sacred Heart.

The Guard of Honour of the Sacred Heart

The vocation of Marie Deluil Martiny unfolded in two phases. In the first, she dedicated herself to propagating the Guard of Honour of the Sacred Heart, a movement of reparation and of perpetual adoration of the Heart of Jesus present in the Most Holy Sacrament of the altar. Marie du Sacré–Coeur, a Visitandine of the monastery of Bourg–en–Bresse launched the Guard of Honour on March 13, 1863. The following year the bishop of Belley recognized the movement as a confraternity, and in 1878 Pope Leo XIII elevated it to the rank of an archconfraternity in France and Belgium.

In the beginning, the movement obliged its members to spend an hour in adoration and reparation to the Heart of Jesus before the tabernacle. The hours of the day and night were so distributed among the members as to offer the Eucharistic Heart of Jesus an uninterrupted presence of reparation and adoring love. Later on, the manner of carrying out one’s assigned hour was modified: no longer was a physical presence before the tabernacle required. One could participate in the Guard of Honour without interrupting one’s daily activities, simply by offering an hour of one’s day in the spirit of adoration and reparation to the Sacred Heart.

The Wound of the Divine Heart

Marie Deluil–Martiny explains the movement in these words:

The Guard [of Honour of the Sacred Heart], the Work in itself, was placed by the Infinite Love of our Master at the entrance of the Wound of His Divine Heart. There, it calls souls, unites them, calls them together, preaches to them, if one may say so, pushes them, and draws them into the interior of the Divine Wound . . . it leads them there, and introduces them therein, after having, so to speak, opened to them the door of this sacred refuge . . . Souls, entering this safe abode are sprinkled, washed, whitened, purified, healed, and supernaturalised, by a most efficacious application of the Blood and Water that came forth from the Divine Wound. But Jesus wants even more: this is the new step that Our Lord desires to make the souls He chose to this end take: they must enter by the gate of the City of God, that is into the Heart of Jesus by the Divine Wound; therein will be their world, their dwelling, their place of rest.

Foundress of A New Religious Family

The second phase of Marie Deluil Martiny’s life was a flowering of the first. After a long preparation in prayer, she opened the first house of the Society of the Daughters of the Heart of Jesus at Berchem near Anvers in Belgium on June 20, 1873. The new foundation was characterized by a burning desire to console the Heart of Jesus and by a mystical participation in His victimal priesthood, patterned after that of His Holy Mother at the foot of the Cross.

They will from that life of suffering love that was the intimate life of the Heart of Jesus; they will penetrate the most tender secrets of His love: the Eucharist, the Church, His divine jealousy for sacerdotal and consecrated souls. . . . What a calling! The Work must give to Christ souls who offer themselves as a sacrifice of Love, these will be the victims of Love that Jesus asks for, by the Holy Eucharist. The Host has become indispensable to my life; I should wish never to leave it for the sake of sacerdotal souls [priests]. Too many of them are satisfied with being Sacrificers and exercise their sacred functions without steeping them enough in the Priestly Spirit, that is, without themselves becoming truly Victims at the same time as Sacrificers, and so God wills that legions of souls who are truly Victims offer themselves as humble supplements for what certain priests are lacking in the Priestly Spirit. Their example is Mary, the Mother of Jesus. 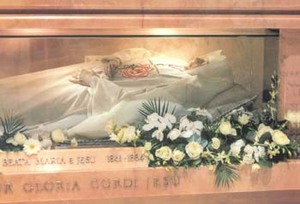 On February 27, 1884, Mother Marie de Jésus was murdered by an anticlerical anarchist in the garden of the monastery she had founded at La Servianne, her family property. Her last words were, “I forgive him . . . for the Work,” that is, for the Institute she founded. She was forty–three years old.

“Our Lord,” she said, “has put into my soul that the souls of the future institute will be like that parcel of the Host that melts in the chalice; they will all melt and disappear in the Blood of Jesus.” The Congregation she founded, the Daughters of the Heart of Jesus, continue her charism of liturgical prayer, reparation, and adoration, with a particular solicitude for priests. Mother Deluil Martiny was beatified by Pope John Paul II on October 22, 1989.

The life and writings of Blessed Marie de Jésus bore fruit in the life of Father Willie Doyle, S.J. Our good friend Pat Kenny writes of the connection between the French victim soul for priests and the holy Irish Jesuit.  You can read about it here.