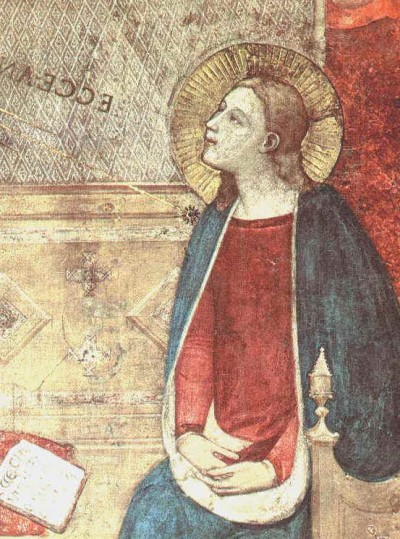 At Matins this morning:

The Lesson from the Holy Gospel according to Luke.

At that time: God sent the angel Gabriel to a city of Galilee called Nazareth, where a Virgin dwelt, betrothed to a man of David’s lineage; his name was Joseph, and the Virgin’s name was Mary.  And so on, and that which follows.

From a Homily by St Ambrose, Bishop & Doctor

The mysteries of God are unsearchable, and it is especially declared by a Prophet, that a man can hardly know his counsels.  Nevertheless, some things have been revealed to us, and we may gather from some of the words and works of the Lord our Saviour, that there was a special purpose of God, in the fact that she who was chosen to be the Mother of the Lord was espoused to a man.  Why did not the power of the Highest overshadow her before she was so espoused?  Perhaps it was lest any might blasphemously say that she had conceived in adultery the Holy One.

“And the Angel came in unto her.”  Let us learn from this Virgin how to bear ourselves, let us learn her modesty, let us learn by her devout utterance, above all let us learn by the holy mystery enacted.  It is the part of a maiden to be timid, to avoid the advances of men, and to shrink from men’s addresses.  Would that our women would learn from the example of modesty here set before us!  She upon whom the stare of men had never been fixed was alone in her chamber, and she found herself alone with Angels.  There was neither companion nor witness there, that what passed might not be debased in gossip: and the Angel saluted her.

The message of God to the Virgin was a mystery, which it was not lawful for the mouth of men, but only of Angels, to utter.  For the first time on earth the words are spoken: “The Holy Ghost shall come upon thee.”  The holy maiden hears, and believes.  At length she said: “Behold the handmaid of the Lord: be it unto me according to thy word.”  Here is an example of lowliness, here is a pattern of true devotion.  At the very moment that she is told she is chosen to be the mother of the Lord she at once declares herself his handmaid.  The knowledge that she was Mother of God caused in the heart of Mary only an act of humility.