Skip to content
HomeAdoration of the Most Holy Sacrament of the AltarLex orandi, lex credendi: the ground of priestly piety 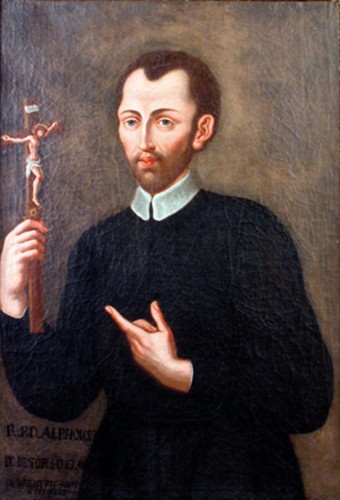 As a Holy Victim

The Secret of the Mass for today’s feast of Saint Alphonsus Maria Liguori goes to the heart of an authentic priestly piety:

Lord Jesus Christ, let our hearts burn with the heavenly fire of sacrifice as a sweet fragrance: who didst grant that blessed Alphonsus Maria should celebrate these mysteries and, by their means, offer himself as a holy victim unto Thee.

A priest is a man set ablaze with a heavenly fire. He cannot approach the altar to offer the Holy Sacrifice without becoming part of the holocaust. When a priest offers himself with the Lamb as a whole burnt offering made over to God utterly and irrevocably, the fragrance of his personal oblation mingles with the sweet fragrance of Christ, and so finds acceptance in the Father’s sight. The fruitfulness of a priest’s intercession is proportionate to his victimhood.

With the Divine Victim

As priest, one stands before the altar to make the sacrificial offering; as victim, one lies upon the altar to be offered in sacrifice. The victimhood of the priest is an exemplary victimhood: it constitutes the single most compelling invitation for the people to participate in the Holy Sacrifice of the Mass by offering themselves together with the Divine Victim. This is the clear teaching of Pope Pius XII in Mediator Dei:

In order that the oblation by which the faithful offer the divine Victim in this sacrifice to the heavenly Father may have its full effect, it is necessary that the people add something else, namely, the offering of themselves as a victim. (Mediator Dei, art. 98)

The priest approaches the altar to offer the Holy Sacrifice to God. The faithful, standing behind the priest, adhere to his mediatorship and, so, are drawn after him into the heavenly fire of the Sacrifice. Even in the absence of the faithful,the priest represents them, intercedes for them, and brings their adoration, thanksgiving, expiation, and petition before God, offering the Holy Sacrifice for the living and the dead.

The physical reconfiguration of churches, by which a priest is obliged to stand behind the altar, facing the people, has had a devastating effect on the theology of the priesthood and on priestly piety. Many priests have, alas, come to view the Mass primarily as a spiritual commodity offered to the people for their edification, instruction, sustenance, and comfort. The idea of offering the Holy Sacrifice to God, even in the absence of the faithful, is fast fading away. It is becoming more and more common for priests to refrain from offering the Holy Sacrifice apart from those occasions when there is a scheduled Mass with people in attendance. Pope Pius XII addressed this question in Mediator Dei:

Some in fact disapprove altogether of those Masses which are offered privately and without any congregation, on the ground that they are a departure from the ancient way of offering the sacrifice; moreover, there are some who assert that priests cannot offer Mass at different altars at the same time, because, by doing so, they separate the community of the faithful and imperil its unity; while some go so far as to hold that the people must confirm and ratify the sacrifice if it is to have its proper force and value.

They are mistaken in appealing in this matter to the social character of the eucharistic sacrifice, for as often as a priest repeats what the divine Redeemer did at the Last Supper, the sacrifice is really completed. Moreover, this sacrifice, necessarily and of its very nature, has always and everywhere the character of a public and social act, inasmuch as he who offers it acts in the name of Christ and of the faithful, whose Head is the divine Redeemer, and he offers it to God for the holy Catholic Church, and for the living and the dead. This is undoubtedly so, whether the faithful are present – as we desire and commend them to be in great numbers and with devotion – or are not present, since it is in no wise required that the people ratify what the sacred minister has done. (Mediator Dei, art. 95–96)

In a certain sense, the widespread custom of celebrating Holy Mass “facing the people” has led to an incomplete and erroneous understanding of the Holy Eucharist: the consecration of the bread and wine into the true Body and Blood of Christ is seen, not so much in view of the Sacrifice offered to God, as it is in view of the Sacrament offered to the people. This shift towards a Protestant understanding of the Most Holy Eucharist is further emphasized by the widespread practice of everyone (or nearly everyone) present feeling compelled to receive Holy Communion. Pope Pius XII addressed this very question in 1947:

We wish in this matter to repeat the remarks which Our predecessor Benedict XIV makes with regard to the definitions of the Council of Trent: “First We must state that none of the faithful can hold that private Masses, in which the priest alone receives holy communion, are therefore unlawful and do not fulfill the idea of the true, perfect and complete unbloody sacrifice instituted by Christ our Lord. For the faithful know quite well, or at least can easily be taught, that the Council of Trent, supported by the doctrine which the uninterrupted tradition of the Church has preserved, condemned the new and false opinion of Luther as opposed to this tradition.” “If anyone shall say that Masses in which the priest only receives communion, are unlawful, and therefore should be abolished, let him be anathema.”

They, therefore, err from the path of truth who do not want to have Masses celebrated unless the faithful communicate; and those are still more in error who, in holding that it is altogether necessary for the faithful to receive holy communion as well as the priest, put forward the captious argument that here there is question not of a sacrifice merely, but of a sacrifice and a supper of brotherly union, and consider the general communion of all present as the culminating point of the whole celebration.

Now it cannot be over-emphasized that the eucharistic sacrifice of its very nature is the unbloody immolation of the divine Victim, which is made manifest in a mystical manner by the separation of the sacred species and by their oblation to the eternal Father. Holy communion pertains to the integrity of the Mass and to the partaking of the august sacrament; but while it is obligatory for the priest who says the Mass, it is only something earnestly recommended to the faithful.

The Church, as the teacher of truth, strives by every means in her power to safeguard the integrity of the Catholic faith, and like a mother solicitous for the welfare of her children, she exhorts them most earnestly to partake fervently and frequently of the richest treasure of our religion. She wishes in the first place that Christians – especially when they cannot easily receive holy communion – should do so at least by desire, so that with renewed faith, reverence, humility and complete trust in the goodness of the divine Redeemer, they may be united to Him in the spirit of the most ardent charity. (Mediator Dei, art 112–117)

The trend among priests not to offer Holy Mass daily, except when required to do so by the parish schedule, has contributed in no small measure to three woes: 1) loss of the priest’s awareness of Holy Mass as a Sacrifice offered to God “not only for the sins, punishments, satisfactions and other necessities of the faithful who are living, but also for those departed in Christ but not yet fully purified” (Council of Trent, XXII, Chapter II); 2) a weakening of the priest’s understanding of his own personal union with Christ, not only as the sacrificing Priest who makes the offering, but also as the Victim immolated upon the altar, albeit in an unbloody manner; 3) a creeping lukewarmness that almost imperceptibly causes a priest to fall away from his “first love” and to alienate himself, by degrees, from the friendship of Christ.

From a positive perspective I would propose that priests commit themselves to three remedies: 1) in conversation and in preaching, refer habitually to The Holy Sacrifice of the Mass, giving this expression preference over the other words currently used to designate the Holy Mysteries; 2) offer the Holy Sacrifice of the Mass daily, even in the absence of a congregation; 3) spend one hour daily before the Most Blessed Sacrament.