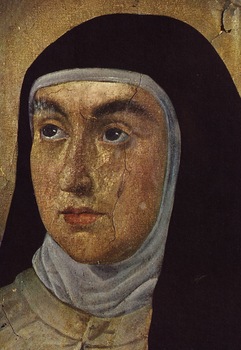 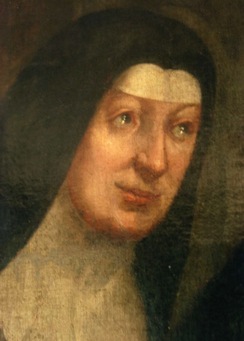 Saint Teresa of Jesus, mystic, teacher of prayer, reformer, and Doctor of the Church, has, without any doubt, set the benchmark for measuring the influence of holy women in the life of the Church. People do not, for example, find it at all odd that La Madre, as she is widely known, should be the primary reference for men who embrace life in any of the reformed expressions of Carmel that claim her as their inspiration and teacher. I have often heard Carmelite friars speak enthusiastically of Saint Teresa as their “holy mother.” So well known was Saint Teresa in the 17th century that Bossuet, “the eagle of Meaux”, found no better way of describing Blessed Marie of the Incarnation, the intrepid mystic of Tours and of Québec, than to call her “the Teresa of the New World”.

Is Saint Teresa the only woman at whose feet men are permitted to sit as disciples at the feet of a master? Is she so unique in the annals of holiness that, as far as men are concerned, a vast chasm separates her from all other mystics and doctors of her sex? My own veneration for Saint Teresa is immense. I would consider it a wondrous blessing to sit at her feet and be numbered among her spiritual progeny . . . but God had another idea for me. He called me to the Benedictine way of life. Ever since Blessed Abbot Marmion introduced me to the Benedictine ideal of holiness, in the middle of the madness of the 60s, I have experienced, over and over again, that it suits me better than any other school of Christian life.

There is no doubt that grace builds on nature. A natural predisposition to the full liturgical life made me take to Benedictine life with a certain ease and, sometimes, with positive delight. Who can describe the enchantment produced in a soul by an antiphon, by a psalm, a responsory, or a collect? The givenness of the liturgy is a masterpiece of divine craftsmanship. The Holy Ghost infuses every detail with a freshness and grace that is hidden from the learned and the clever, but disclosed to little souls, to the man who trudges into choir day after day, knowing, in faith, that there Christ waits for him, and that there, the prayer of Christ will fill his soul.

Only when I was nineteen years old did I meet the great lady who would, in these later years of my life, become my own Teresa of Avila. Like Saint Teresa, Mectilde de Bar is a mystic, a teacher of prayer, and a reformer. She is not a Doctor of the Church, but she certainly has the makings of one. It was Henri Brémond (31 July 1865 – 17 August 1933) — say what you will about him, I know that he had a dodgy side — who, in his monumental 11 volume Histoire litteraire du sentiment religieux en France depuis la fin des guerres de religion jusqu’a nos jours introduced me to Mother Mectilde du Saint-Sacrement. I was blessed to have a Benedictine spiritual mentor, Dom R.C., who supplied me with one volume after another of Brémond’s master work. Being nineteen, and having a youthful appetite for reading, I made my way through all 11 volumes, poring over them well past my bedtime. Something about Mectilde de Bar struck a chord deep inside my own soul. Little did I suspect then that the chord would continue resounding even into the sixth decade of my life.

Who is Mectilde de Bar?

So who is Catherine (Mectilde) de Bar (1614-1698), and why would I want to sit at her feet? Why do I call her the Benedictine Teresa of Avila? Her God-seeking journey, though consistent, was torturous, and marked by danger, exile, illness, poverty, and uncertainties on all sides. At the tender age of nineteen she entered the monastery chosen for her by her father; a house of the Annonciades, religious of The Ten Pleasures (or Virtues) of the Blessed Virgin Mary, situated at Bruyères, in the diocese of Toul.

Taught by Our Lady

As a novice, Catherine, who, as an Annonciade had received the name, soeur Saint-Jean-l’Évangéliste, suffered a devastating season of dryness in prayer and interior desolation. She turned to the Blessed Virgin Mary, saying, “I don’t know how to pray, nor do I know where to turn to learn how. If thou thyself wilt not deign to become my teacher, just as, up until now, thou hast been my mother, I am lost.” Our Blessed Lady heard her request, so much so that years later, Mectilde was able to write: “I can assure you that all that I know I learned from the Most Holy Virgin; she has always been my teacher, and, in all the situations in which I have found myself during my life, she has never failed to instruct me in my duties.”

The Thirty Years War (1618-1648) was raging at the time, pitting France against the House of Austria. When Swedish soldiers, many of them fanatical Lutherans fighting for the French, invaded Lorraine, they had no scruples about sacking churches and desecrating the Most Blessed Sacrament. After the Swedes, notoriously undisciplined French mercenary soldiers tore through Lorraine, completing the utter devastation of the country. One of these was a former suitor of Catherine de Bar. Donning masculine attire, Catherine and a companion, also disguised as a man, fled. A farmer hid them under bales of hay loaded on his cart. When Catherine’s pursuer, alerted to her escape, pierced the bales with his sword, not one thrust touched Catherine and her companion. They had prayed continuously to the Blessed Virgin to protect them.

By this time, the whole community of Annonciades was obliged to abandon the monastery of Bruyères. They elected 20 year old Mother Saint-Jean-l’Evangéliste superior of the group and, in search of safety and quiet, moved from one place to another until, in the end, they accepted the invitation of the Benedictines of Rambervillers to take refuge with them. These Benedictines had embraced the observance of Dom Didier de la Cour (1550-1623), founder of the reformed Congregation of Saints Vanne and Hydulphe. The Annonciades lived alongside the Benedictines for a year (1638-1639) during which Catherine de Bar discovered the Rule of Saint Benedict.

Profession as a Benedictine

The Duchy of Lorraine, already ravaged by war, now fell to famine and plague. Saint Vincent de Paul, moved by so much suffering, sent a group of ten Lazarists to Lorraine to help the poorest of the poor. Learning of the plight of the itinerant Benedictines, Saint Vincent had them brought safely to Paris, where, on the evening of 29 August 1641, Mademoiselle Legras (Saint Louise de Marillac (August 12, 1591–March 15, 1660) received the exhausted travelers into her own home. The next day, Catherine de Sainte-Mectilde and her companion climbed to the summit of Montmartre where Lady Abbess de Beauvilliers was waiting to welcome them into the great Benedictine abbey that, at the time, covered la butte, close to the site of the present Basilica of the Sacred Heart.

An opportunity to reconstitute her community in Normandy became the occasion for Catherine to meet some of the greatest spiritual figures of 17th century France’s mystical invasion: Saint John Eudes, Monsieur de Renty, and Monsieur de Bernières were among them. Normandy was, however, but another halt in the journey. In June 1643, Mother Catherine de Sainte-Mectilde, together with her companion, Bernardine de la Conception, returned to Paris, hoping to find there, a place that the whole community from Lorraine might finally call home.

In Paris, Catherine de Sainte-Mectilde met the famous Father Chrysostom of Saint-Lô, provincial of the Franciscans of the Third Order Regular in France. Catherine wrote an account of her soul for Father Chrysostom. He was to be her spiritual guide until his death three years later in 1646. Father Chrysostom taught a contemplative prayer that was the pure abandonment of the soul to the action of the Divine Bridegroom. There was, however, nothing of the quietist about him; he enjoined Catherine to practise silence, withdrawal from the world, hiddenness, annihilation of self, abjection, obedience, and love of the cross. He imposed frightening practices of penance on Catherine: no more than three hours of sleep, the discipline, hair shirt, and a girdle of iron set about with points. Concerning Catherine de Sainte-Mectilde, Father Chrysostom made this astonishing prophecy: “God, by a most special providence, obliges you to honour the Blessed Sacrament with a particular devotion. It is in this sacrament that Our Lord Jesus Christ lives and shall live until the consummation of the ages in a life that is all hidden.” Father Chrysostom authorized Catherine to receive Holy Communion daily, something extremely rare at the time.