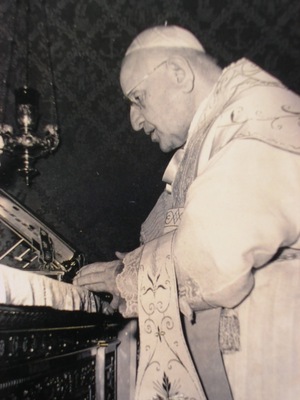 It was 1962. I was in 5th grade in Saint Francis School when, under the tutelage of the formidable Sister M. Raymond, we began reciting every day in class the prayer composed by Saint John XXIII “for the success of the Ecumenical Council.” Folks were not altogether sure how to pronounce Ecumenical. That took some time. Though we were but ten and eleven years old, we had, I think, a very good idea of what we were saying. The prayer was printed on a glossy holy card bearing an image of the first Pentecost.

Around Mary and Guided by Peter

One mysterious phrase has come back to me again and again over the past fifty years: “Renew in our time Thy wondrous works, as in a new Pentecost, and grant that Holy Church, gathered together in unanimous, more intense prayer, around Mary, the Mother of Jesus, and guided by Peter.” Something about saying these words fascinated me. Little did I know then that one day, over fifty years later, I would live in a monastery under the patronage of Our Lady of the Cenacle.

Fifth grade was a hard year for me. I couldn’t grasp long division. Math homework nearly drove me to despair. But music class I loved, and the mysterious phrases of the Pope’s Prayer for the Success of the Ecumenical Council. Here it is, as we said it back then:

Prayer for the Ecumenical Council

O Divine Spirit, sent by the Father in the name of Jesus, Who dost infallibly assist and guide the Church, pour forth the fullness of thy gifts upon the Ecumenical Council.
Kind teacher and Comforter, enlighten the minds of our bishops, who, responding to the invitation of the Sovereign Roman Pontiff, will gather in solemn assembly.
Grant that from this Council there may come forth abundant fruits: that the light and strength of the Gospel may ever more widely influence human society: that new vigour may infuse the Catholic religion and its missionary task; that the Church’s teaching may be better known and Christian morality more widely practiced.
Sweet Guest of our souls, confirm our minds in truth, and dispose our hearts to obedience, so that the decisions of the council may find in us generous acceptance and prompt fulfillment.
We beseech Thee, too, on behalf of those sheep, who no longer belong to the one fold of Jesus Christ, that they also, glorifying as they do in the name of Christian, may finally regain unity under one Shepherd.
Renew in our time Thy wondrous works, as in a new Pentecost, and grant that Holy Church, gathered together in unanimous, more intense prayer, around Mary, the Mother of Jesus, and guided by Peter, may spread the kingdom of the Divine Saviour, which is the kingdom of truth, of justice, of love, and of peace. Amen.