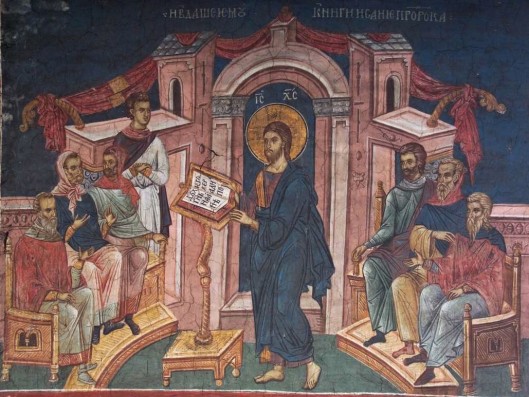 The Bible: A Liturgical Book

Today’s feast of Saint Hilary of Poitiers, Bishop and Doctor of the Church, is a opportunity to consider just how we, Catholics and Benedictines, understand the place of the Bible in our lives.  For Catholic and Orthodox Christians the Bible is not a personal book. Some may find this surprising, but it is true.  For Catholic and Orthodox Christians the Bible is, first of all and above all, a liturgical book. The liturgy is older than the Bible; one might say that the Bible came into being for the liturgy. The Bible emerges from sacred tradition as a liturgical book; for this reason the Bible’s native context is the sacred liturgy.  Only in this, its native context, can it be heard rightly, for the Church alone is the space in which the Word of God, contained in the Scriptures, attains its fullest and most powerful resonance.

“Now,” you may be saying, “I am really confused. I thought the Sacred Scriptures are the Word of God. Is not the Bible the Word of God?” Let me clarify this for you. When we speak of the Word of God we are referring to a living message conceived in the heart of God, that comes forth from the mouth of God, endued with the power of the Holy Ghost. It is a living word: a word uttered in a given moment, a word destined by God to be received in faith and to become fruitful in the Church and, through the liturgy of the Church — Holy Mass, Divine Office, and Sacraments — in the hearts of the faithful. The Sacred Scriptures are a collection of texts, printed, and bound between the covers of a book.  Only when that book is opened in medio ecclesiae (in the midst of the Church), and chanted or read in the hearing of the faithful, does its content become a living word, the very Word of God, deployed in power. “God’s word to us is something alive, full of energy; it can penetrate deeper than any two-edged sword, reaching the very division between soul and spirit, between joints and marrow, quick to distinguish every thought and design in our hearts” (Hebrews 4:12). A text is one thing; a living word is quite another. 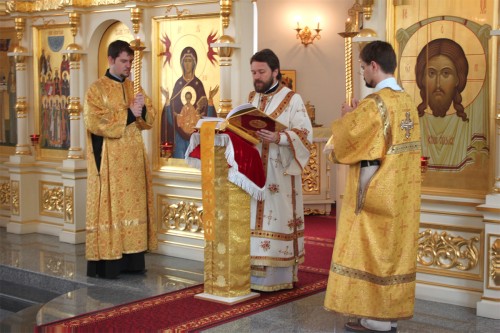 In the Radiance of the Liturgy

The Bible, this liturgical book belonging to the Church, is also the source of a personal hearing of the Word of God, notably in lectio divina. Unlike Protestants who may open the Bible at random, or follow a personal reading plan, or use it to prepare a teaching or sermon, Catholic and Orthodox Christians submit to the Church’s use of the Bible in the liturgy. Lectio divina is, then, intrinsically related to the sacred liturgy; it flows out of the sacred liturgy and back into it. The Catholic or Orthodox Christian can never, even when reading the Scriptures in solitude, remove the Bible from its native context, which is the sacred liturgy. Only in the radiance of the sacred liturgy — and in relationship to the altar, towards which the proclamation of the Word God orients us, — can one read and hear the Scriptures as the Holy Ghost, who inspired them, intends. 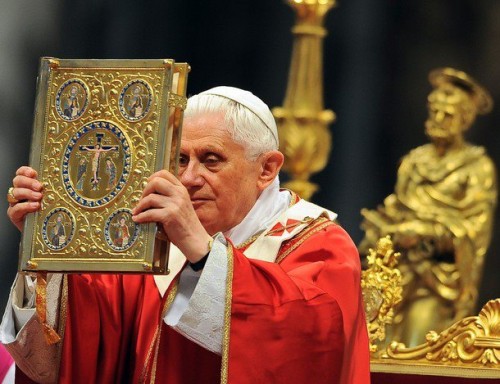 The Presence of Christ

The Church, through her liturgy, teaches the faithful to open the Sacred Scriptures in anticipation of a real encounter with the living God, and with the certainty of hearing His word. One opens the Bible, in some way, as the priest or deacon opens the tabernacle, that is to say, reverently, and in a spirit of humble faith and profound adoration. He who speaks to us through the Sacred Scriptures is the same Lord who nourishes us with the adorable mysteries of His Body and Blood. Whereas in the first instance, He communicates Himself to us by means of the word that is read, and read in order to be heard, in the second, He gives us His very self and, by the Sacrament of His Body and Blood, unites us to His Sacrifice. Unlike the real, substantial, and abiding presence of Christ in the Most Holy Eucharist, the presence of Christ in His word is limited in time; it is linked to the communication and reception of the word.  It is prolonged by its enduring effects in the soul. By this I mean that the purifying, sanctifying, and unifying effects of the presence of Christ in His word may last in time after the initial hearing, but only as the effect of a presence that is mysteriously and intimately bound up with its liturgic proclamation.

What should one read in lectio divina? In my long personal experience, it is best to focus on the very texts that will be chanted or read, and heard on a given day, in Holy Mass and in the Divine Office: the Introit, the Epistle or Lesson, the Gradual and Alleluia or Tract, the Gospel, the Offertory Antiphon, and the Communion Antiphon, which, very often, repeats a fragment of the Gospel of the day. It is profitable also, to linger over the antiphons, psalms, lessons, responsories, and versicles of the Divine Office. These are the things that constitute the object (or the matter) of one’s lectio divina.

There are also moments in life, notably during a retreat or on the occasion of a special anniversary, when one may want to read a particular book of the Bible continuously from start to finish. This too must be done with a window opening onto the sacred liturgy and in reference to the Church’s prayer on a particular day or in a particular season.

Lectio divina can be done anywhere, but it is most profitable to reserve a particular place for it. Ideally, one should have the equivalent of a monastic cell. For the married man or woman, living a family life with young children, this may be something of a challenge. Daddy or Mummy may need to have a special place in the house, be it ever so humble, where, it will be understood, the heart can opened to the Word of God in something approaching silence. Many persons have told me that in order to do lectio divina it is necessary to get out of the house and to take refuge for thirty minutes or an hour in a church, close to Our Lord’s sacramental presence. Some people like to repair to the woods or to a deserted country road where it is possible to read aloud without disturbing others nor being disturbed.

For a monk, obviously, the privileged place of lectio divina is the cell, that “enclosure within the enclosure” that can become a place of desert, and the wedding chamber of the Divine Bridegroom. Some are drawn to do their lectio divina in the Oratory so as to benefit from the light that shines from Our Lord’s Eucharistic Face, and from the warmth that emanates from His Eucharistic Heart all ablaze with charity.

Ideally, one would want to do lectio divina daily. The obligations of one’s profession and the demands of family life may render this impossible for some.  In that case, it is important to choose the best time of day — usually early in the morning or late in the evening — and to hold to that time as to a real appointment, not to do something, but to meet with someone. Should it be impossible to do one’s lectio divina daily, it can be done three times a week or even twice a week, but with regularity and perseverance.

Lectio is the reading of the Word in order to hear it.  Whereas, in secular society, speed–reading or even the mere scanning of text are touted as skills, in the monastic tradition these so–called skills are liabilities.  One reads the Word of God slowly, deliberately, and with attention, in order to receive the Word of God through hearing.  Whenever possible, it is good to read the Sacred Scriptures aloud, so that by pronouncing the text in a way that engages one’s eyes, one’s breath, one’s tongue, one’s teeth, one’s muscles, and one’s ears, the whole body is actively engaged.  A mere visual reading of the text is inadequate.

Meditatio consists in the gentle but persistent repetition of those phrases or words that, upon being heard, seem to lodge themselves in the mind and fix themselves in one’s memory. It happens that the Holy Ghost, the dextrae Dei Digitus (Finger of God’s right Hand) underlines and illumines certain passages or words found in the liturgy of the day. These are the passages and words that merit repetition until, by dint of repetition, they descend into the heart.

Oratio is the prayer that rises from the heart into which the word of God has descended. Models of oratio are given us in the collect of the Mass and Divine Office, in the Preface and in the Canon of the Mass itself, in the Secret and Postcommunion of the Mass, and in the other formularies of prayer that are permanent evidence to fruitfulness of the Word of God in the Church through the ages. One cannot either discount the hymnody of the Mass and Divine Office, beginning with the Gloria in excelsis, the Te Deum, and the Te decet laus, and embracing all the Sequences of the Mass, and the hymns of the Hours. The liturgy itself is the school of personal prayer in which the Holy Ghost is the ever–present Teacher.

Contemplatio is an awareness — by faith not by feelings — of the presence of God; it is imbued with profound reverence and adoration. It is a way of adhering gently, and in a kind of en–nothing–ment of self, to the operations of God in the soul. For many souls, and especially for me, as a monk vowed to perpetual adoration, contemplatio is an adoring orientation to the presence of Our Lord in the Sacrament of His Love, even when attending to the ordinary duties of daily life. He who is present in the Most Holy Sacrament of the Altar in all the glory of His adorable humanity inseparably united to His divinity, is also present by His grace, together with the Father and the Holy Ghost in the interior sanctuary of the soul. Over time, awareness of the presence of God becomes the perpetual adoration of God until, at length, with Mother Mectilde de Bar, one can only say, “I adore and I submit.”

With my loving blessing to each one,