Skip to content
HomeMectilde de BarLed on by God’s Providence 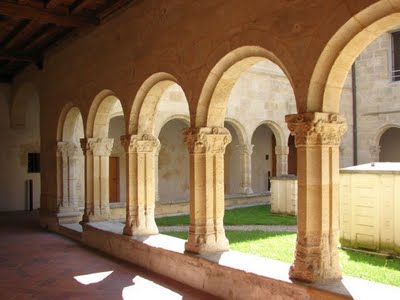 Catherine de Bar, now Sister Saint John the Evangelist, novice in the Order of the Blessed Virgin Mary, the Annonciade, turns to Our Lady and asks to be enlightened with regard to her true vocation. Catherine is troubled by persistent doubts.  It is noteworthy that, already, whenever Catherine is troubled, or in crisis, or doubt, or fear, she turns spontaneously to the Blessed Virgin Mary as to her ordinary recourse. She speaks to the Mother of God with a brutal honesty:

Would it not have been better for me to remain in the world, if I am not going to find here the means to serve you with more purity and holiness?

In the grip of her crisis, Catherine ponders in her heart what manner of response Our Lady might make to her; with intense devotion she prays the Ave Maria. She waits for light to be given her. Shall she make profession or return to the world? As she meditates the Ave Maria, Catherine discovers spiritual benefits of the religious life that, until this point, she had not seen. The Angelic Salutation (the Ave Maria, or Hail Mary) seems to be illumined for her from within.

Paradoxically, Catherine is also haunted by something her parents said when she, as a small girl, hesitated to obey: “You will never be a religious!” Is this, in fact, coming true? Is she not suited to this way of life?  Should she perhaps content herself with being a laysister? In any event, her eyes are giving her some trouble again; will she be able to read the Divine Office? Is she not too vivacious for the monotony of claustral life? All of these contradictory thoughts confuse her. She opens up to her her superior. “What? A laysister? Certainly not. Monotony? My dear child, would that you might have the luxury of always doing the same thing!”

Sister Saint John the Evangelist has to make up her mind. She obtains permission to spend forty days in solitary retreat! (Today this would be considered most extraordinary for a novice. It might even be seen as a sign of eccentricity, or imbalance, or a ploy for attention.) During this time Sister Saint John prays almost constantly; she adds the hairshirt and other austerities to her supplications. Finally, on the night before she is to pronounce her vows, she has a dream that she will later relate to her director, Father John Chrysostom.  She sees herself led by angels into the presence of the Virgin Mary, Queen of Heaven, seated upon a throne. Humbly she pays her respects to the Mother of God, who, in turn, offers them to the Most Holy Trinity. Christ Jesus receives  her as His spouse and signs the contract of this alliance in His own Blood. Sister Saint John wakes up, hurries to the monastic church, and spends the rest of the night there, her heart all ablaze with love. 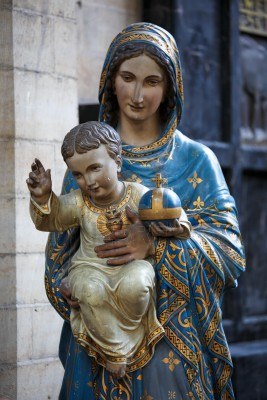 The next day — was it 25 March 1633? We are not certain — Catherine de Bar makes her profession as an Annonciade, amidst the customary solemn rites. A multitude of people, attracted by the beauty of the ceremony, are in attendance. The curé of the parish of Bruyères assists at the celebration.  He relates that, at a certain moment, the sun shone through the stained–glass windows of the church, causing a wonderful light to surround the head of the newly–professed Annonciade, and to reflect on the wall. The Venerable Henri–Marie Boudon, later archdeacon of Évreux, spoke of it in 1654 as an extraordinary mark of the graces that God held in reserve for His handmaid.

Immediately after her profession, Catherine, now Mother Saint John the Evangelist, enters into ten days of retreat; in the Order of the Annonciade, these days of profound recollection are known as The Silence of the Bridegroom. It is a time of spousal intimacy with Christ. During Catherine’s post–profession retreat something happens that, once again, troubles her sensitive soul. Inexplicably, the ring of profession, placed on her finger as a sign of her bridal covenant with Christ, breaks apart. Not wanting to violate her sacred silence, Catherine shows the broken ring to her superior, Mother Angélique, indicates by signs that she is not responsible for its being broken. Newly professed, Catherine’s peace is already perturbed; she imagines that the broken ring signifies that God has rejected her. Wisely, Catherine’s superior suggests that the broken ring may well signify that this profession is not Catherine’s final one. Could it not perhaps mean that she will pass into another Order? When Mother Angélique hands the ring back to Catherine, it is once again intact. It is the same ring, broken for a time, and now effortlessly put back together.

Any reader who has taken the time to follow Catherine’s journey thus far will have noticed the richness and complexity of her personality, as well as her weaknesses. Catherine de Bar is given, in some way, to extreme emotions. She wants certain things intensely and, once she has them, experiences dissatisfaction and ennui. Only months before her profession she wonders if she is not to return to the world. She passes from consolations to desolation and back again. She goes back and forth between wanting the life of an Annonciade in Bruyère and craving the solitude of a recluse. She can be winning and cheerful and, just as easily, disconcerting and troubled. She believes in dreams and premonitions. She sees very few things as mere happenstance.

The Gift of Authority

It would seem that Catherine de Bar is her best self when she is in charge of things. Responsibility does not crush her; it seems to stimulate her creativity. Responsibility brings out her best qualities as it did when, for example, while still a novice, she assumed the care of the community struck down by the plague, and assured the regularity of the Hours. This trait of personality is often found in those whom God has destined to undertake a new work in the Church. One can hardly imagine Saint Teresa of Avila, or Mother Yvonne–Aimée, or someone like Abbot Marmion in a subsidiary position with naught to do but execute orders from above. This is not to say that such holy people are not obedient; it is, rather, to affirm that they flourish most when invested with authority and able to organise their own energies, time, and initiatives while, at the same time, stimulating others and calling forth their gifts.

This does not mean that Catherine de Bar is not humble.  Her humility is profound and real; with the passing years it will become an uninterrupted indentification with the humble Jesus, silent and hidden in the Sacred Host. She will protest, even into the last years of her life that she wants to be freed from the burden of authority. At the same time, being in authority gives her the space, and time, and freedom to bow beneath the overshadowing of the Holy Ghost and to be extraordinarily fruitful for souls.

In the Care of Lady Abbess Mary

The one constant that emerges from Catherine’s life thus far is her confidence in the maternal care of the Blessed Virgin Mary. In every crisis she goes to Mary. Mary is Catherine’s counselor, her comforter, her teacher and, already, her Lady Abbess, the mother, gentle and wise, to whom she can, and does, tell everything.