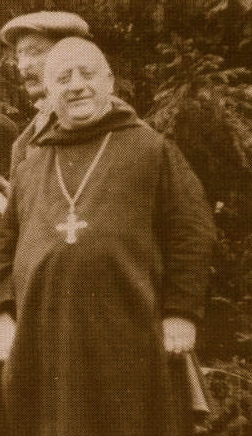 Today is the 90th anniversary of the death of Blessed Columba Marmion, priest, abbot, and eminent Doctor of life in Christ. I am profoundly indebted to Blessed Marmion for all that I have received through his writings and through his intercession.

I was introduced to Abbot Marmion 46 years ago. He has never left my side. Today I want to give thanks publicly for Blessed Columba Marmion’s presence in my life. I believe that Our Lord gave him to me as a teacher, a father, and a friend. Such things happen in the Communion of Saints.

Pray to Hasten His Canonization

I thank and praise God, the Father of Lights, for Blessed Abbot Marmion’s teaching, his paternal care over my soul, and his friendship. I ask God our Father to hasten the canonization of Blessed Columba Marmion, so that he whom Christ has hidden with Himself in the glory of the Father in heaven, may be more widely known and glorified in the Church on earth.

For the Sake of Ireland

Blessed Columba Marmion may very well be the greatest gift in modern times of the Church in Ireland to the Church universal. Catholic Ireland needs the affirmation, the consolation, the joy, and the holy pride that will come from the beatification and canonization of those sons and daughters of hers who illumined modern times with the radiance of the Face of Christ shining through them. I could mention, among others, Father Willie Doyle, Frank Duff, Edel Quinn, Matt Talbot, Father John Sullivan, and Little Nellie Organ but, of all of these, Blessed Columba Marmion is the one whose Christ-centred life and teaching, like a lamp on a lampstand, shone most brightly in the Church of the 20th century, and in souls.

Here is a extract from Blessed Columba Marmion’s conferences to priests on Holy Mass:

The Mass and the Priesthood

The priest is raised to a dignity which is, in a certain sense, divine, for Jesus Christ identifies Himself with him. His role as mediator is the highest vocation in this world. It is worth repeating: if a priest did nothing during his whole life but offer the Holy Sacrifice piously every morning, or even if he were to offer it once, he would have accomplished an act greater in the hierarchy of values that those events which convulse the world. For the effect of every Mass will endure for eternity, and nothing is eternal except the divine.

We must orient our whole day towards the Mass. It is the central point and sun of the day. It is, as it were, the focus from which there comes to us light, fervour, and supernatural joy.

We must hope that, little by little, our priesthood may take possession of our soul and our life so that it may be said of us: “he is always a priest.” That is the effect of a Eucharistic life, embalmed in the perfume of the sacrifice which makes us an alter Christus, another Christ.