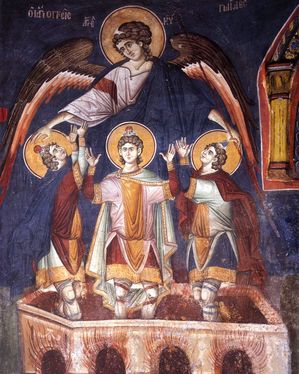 In the Sight of the Nations
The impending presidential elections in the United States, and also the plight of Christians affected by the conflict in Syria, have motivated many to give themselves to prayer and fasting, begging God, through the intercession of the Immaculate Virgin Mary, to manifest His power and His mercy “in the sight of the nations” (Psalm 97:2). These, however, are not the only situations that cry out for prayer and fasting.
Against the Lord and Against His Christ
There is not a nation on earth where Christ is not suffering in the members of His Body. There is not a nation on earth where the Catholic faith is not threatened by the machinations of the wicked. The prophecy of the psalmist unfolds, even as I write: “Why have the Gentiles raged, and the people devised vain things? The kings of the earth stood up, and the princes met together, against the Lord and against his Christ” (Psalm 2:1-2).
Shall the Son of Man Find Faith on Earth?
While certain political situations are, without any doubt, critical at the moment, there is, I believe, one single crisis underlying all others and causing them. It is the loss of faith. I am haunted by Our Lord’s words: “The Son of man, when he cometh, shall He find, think you, faith on earth? ” (Luke 18:8). The Year of Faith proclaimed by Pope Benedict XVI sounds the alarm.
Ignorance and Loss of Faith
Families that have preserved the Catholic faith and transmitted it from one generation to the next for well over a thousand years — and this, often at great cost — are seeing more and more adults to whom the Faith means little or nothing, and children deprived of the sacraments, and growing up in complete ignorance of the religious heritage that is rightfully theirs. The reasons for this are many and complex: among them are, I think, the modernist sabotage of liturgical reform following the Second Vatican Council; the destruction of sound catechesis and sacramental preparation; the pervasive climate of dissent that began in 1968 with the widespread refusal of the teaching of Humanae Vitae; and the shamelessly anti-Catholic bias of the secular media.
Maternal Side
My maternal ancestors are rooted in the region around Alife in Campania (Italy). The diocese of Alife was, according to a well-established tradition, evangelized by Saint Peter the Apostle himself, as he made his way to Rome. This means, in effect, that on my mother’s side, my family can claim 2000 years of Catholic and Apostolic Christianity. It does not mean, necessarily, that the flame of the faith burned tall and bright in every generation; it does, however, mean, the the light of the faith was transmitted, even if only in the form of a spark, from one generation to the next down through the ages.
Paternal Side
My father’s side of the family can claim a faith going back to the evangelization of Ireland by Saint Patrick in the 5th century. The cruel persecution of Catholics in Ireland under Elizabeth I, and then Oliver Cromwell, and the centuries of Penal Laws that followed, did not succeed in tearing the Faith out of the hearts of the Irish. Dungeon, fire, exile, sword, famine, and emigration were not able to snuff out the Catholic faith of the Irish. Only in the past forty years have we begun to see children of Irish heritage deprived of the very soul of that heritage: the Catholic faith incarnated in an heroic devotion to the Holy Sacrifice of the Mass, to the Priesthood, and to the Rosary.
The Real Threat: Loss of Faith
My intention is not to minimize the gravity of the upcoming presidential elections or the sufferings of Christians in the Middle East and elsewhere. It is, rather, to suggest that the loss of faith, particularly in the old Catholic nations of Europe, and among the descendents of CatholIc immigrants in the United States, represents a greater threat to peace, to freedom, and to the protection of human life from conception until natural death, than does anything else. The conscience of voters cannot be formed in a kind of pre-election crash course. Catholic consciences flourish in Catholic families, and Catholic families flourish in a Catholic culture.
The Shortness of Life on Earth
Children deprived of the Catholic heritage that is rightfully theirs will, sooner or later, suffer from a chill in their hearts and a terrible darkness in their spirits. I have no doubt that God, in His infinite goodness, will devise a way to reach out to them in their distress, and that the Blessed Virgin Mary will offer them the care of her Maternal Heart in this earthly vale of tears. All the same, I fear for them because this life is short, and because this planet has become a precarious place to live, and because the human heart can, alas, become accustomed to living in the chill and darkness of a practical atheism, and so grow hardened in sin.
Yes, Pray and Fast
I would propose that as we pray and fast in the days ahead, we meditate the prayer of Azarias in the Book of Daniel, and make its sentiments our own:

Blessed art thou, O Lord, the God of our fathers, and thy name is worthy of praise, and glorious for ever: For thou art just in all that thou hast done to us, and all thy works are true, and thy ways right, and all thy judgments true. For thou hast executed true judgments in all the things that thou hast brought upon us, and upon Jerusalem the holy city of our fathers: for according to truth and judgment, thou hast brought all these things upon us for our sins. For we have sinned, and committed iniquity, departing from thee: and we have trespassed in all things: And we have not hearkened to thy commandments, nor have we observed nor done as thou hadst commanded us, that it might go well with us.

Wherefore all that thou hast brought upon us, and every thing that thou hast done to us, thou hast done in true judgment: And thou hast delivered us into the hands of our enemies that are unjust, and most wicked, and prevaricators, and to a king unjust, and most wicked beyond all that are upon the earth. And now we cannot open our mouths: we are become a shame and reproach to thy servants, and to them that worship thee. Deliver us not up for ever, we beseech thee, for thy name’s sake, and abolish not thy covenant. And take not away thy mercy from us for the sake of Abraham thy beloved, and Isaac thy servant, and Israel thy holy one:

To whom thou hast spoken, promising that thou wouldst multiply their seed as the stars of heaven, and as the sand that is on the sea shore. For we, O Lord, are diminished more than any nation, and are brought low in all the earth this day for our sins. Neither is there at this time prince, or leader, or prophet, or holocaust, or sacrifice, or oblation, or incense, or place of firstfruits before thee,That we may find thy mercy: nevertheless in a contrite heart and humble spirit let us be accepted. As in holocausts of rams, and bullocks, and as in thousands of fat lambs: so let our sacrifice be made in thy sight this day, that it may please thee: for there is no confusion to them that trust in thee.

And now we follow thee with all our heart, and we fear thee, and seek thy face. Put us not to confusion, but deal. with us according to thy meekness, and according to the multitude of thy mercies. And deliver us according to thy wonderful works, and give glory to thy name, O Lord: And let all them be confounded that shew evils to thy servants, let them be confounded in all thy might, and let their strength be broken. And let them know that thou art the Lord, the only God, and glorious over all the world.