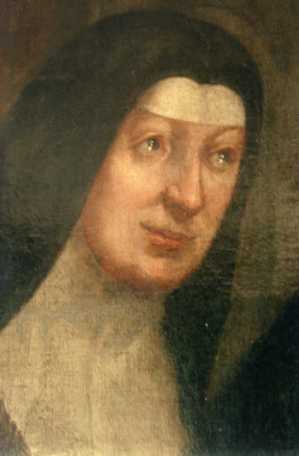 This text of Mother Mectilde demonstrates her assimilation of the purest monastic doctrine. The beautiful image of Mother Mectilde is a detail of the painting of the First Amende Honorable on 12 March 1654, attributed to Philippe de Champaigne. It belongs to the monastery of Mas-Grenier in France.

Hold on to Nothing

In a profound silence, O my soul, bear up under all our interior situations, and let all things be brought to stillness within us. Neither in ourselves, nor in any one of these things, nor in creatures do we find a motive to vaunt ourselves. Allow all things to flow back down into their source. Hold on to nothing for ourselves, and even after having received many demonstrations of predilection and of grace, let us conduct ourselves as having received nothing. Remain like one dead, in a perfect detachment, without going over such things and without elevating ourselves, as if we didn’t even know that the hand of God touched us to show us mercy. Let us not pin our lives on the gifts of God and on His lights.

Mother Mectilde’s teaching is austere; some would even find it harsh. She doesn’t want souls to fluctuate according to their feelings in prayer, nor to become febrile in times of consolation. Allow all things, she says, to flow back down into their source, like water off a duck’s back. She doesn’t like souls who are greedy and grasping for spiritual experiences. Her expression, “remain like one dead” may shock some, but it comes straight from the Desert Fathers who teach that whether one is praised or denigrated, lifted up or cast down, one should react as would a dead man, that is, with indifference.

Pure Capacity for God’s Good Pleasure
Our life must be sustained by the divine good pleasure. God must be the soul of our soul; He is the one who must give us life and cause us to act. Apart from the life we receive from Him, there is no purity of life in us, everything inside us is corruption. Instead we must lose everything and bring to nought (1) all that we are in ourselves, (2) all that we are with regard to creatures, (3) and all that we are with regard to the gifts of God. Before arriving at the self-emptying (of which I am speaking), one must lose these three things; and then, my soul, thou shalt be nothing more than a pure capacity for God’s good pleasure. He will make of thee, and do in thee, whatever He pleases. Oh, what a great thing it is to be nothing and to await all from God!

It is impossible to find God while searching for ourselves. It is necessary to make one’s way in darkness in order to find the light, to lose oneself in order to find oneself (cf. Matthew 16:25), to die in order to live, to empty oneself out in order for God to reign.

Mother Mectilde’s doctrine is that of Saint John of the Cross. I have had occasion to suggest, elsewhere, that she is the Benedictine John of the Cross. It is her last sentence in the above section that seemed to jump off the page and lodge itself in my heart: “Oh, what a great thing it is to be nothing and to await all from God!” Saint Jeanne Jugan said something very similar.

One Who Holds onto Something Is Not Poor

Blessed are the poor in spirit, because the kingdom of heaven is theirs (Matthew 5:3). What is poverty of spirit? It is a soul stripped of creatures and of herself. When the Spirit of God takes charge of a soul who abandons herself to Him, He makes that soul poor. And why? Because God cannot reign in a soul filled and occupied by things. One who holds onto something is not poor; but one who dies continuously to every sensible thing; who suffers the lack of every human help; who willingly practises poverty even in outward things; who empties his spirit of creatures and takes rest in no created thing, however excellent it may be; who does not welcome any thought of self aggrandizement, nor the praises of men; who, in a continual attitude of simplicity towards God, desires Him alone; who wants to know nothing apart from Him; who looks for nothing outside of Him; who does not attach herself to the gifts and graces she has received, and claims no good thing as her own; who remains in her own littleness and makes it the place of her rest: this soul is ready to have full possession of the kingdom of God that, according to the Gospel, is conceded only to the violent (cf Matthew 11:12). In fact, only those carry it away who know how to overcome themselves and overcome their senses and their own passions.

Nothing namby-pamby here! Mother Mectilde is a direct descendant of the Desert Fathers. Her language is that of Saint John Cassian and of Saint John Climacus. At the same time, she is imbued with a Benedictine sense of compassion for the weak. Like Saint Thérèse of the Child Jesus and of the Holy Face, she is content to remain in her own littleness and make it the place of her rest.

Made Poor by the Operation of the Spirit of God

Furthermore, what does the kingdom of God mean? And how are we to understand it? The kingdom of God in us is nothing other than God who lives and reigns in the soul that He possesses as His divine palace. He is the master therein. He is the sovereign. He formulates its laws, and to Him all things are in submission. The expression “kingdom of God” means that God alone is found to occupy the soul, and nothing shines through her but Him alone. The soul is so perfectly submitted to Him in all things that her own will disappears, and nothing more remains except the one desire to see God living in her more and more, even unto the complete loss of herself in Him. This is the one single desire and the only richness left in her. But even if the soul is still animated by this desire, this thing happens in so gentle and tranquil a way that the desire passes from God into her, and from her into God, in a movement that is incessant and yet without any agitation or disturbance. Happy the soul who possesses this celestial beatitude, who is poor in spirit by the operation of the Spirit of God, rendered poor by grace, and not reduced to poverty by the misfortunes of life.

Let us love this precious poverty. Let us choose it upon solicitation by the Holy Spirit, and let us say: “O sacred poverty, thou formest in me the reign of God Himself! I choose thee and I want to receive thee into my heart. I will that Jesus should take delight in seeing His reign established therein, and that all that I am should be filled full of Him. No longer do I want any creature [that binds itself to me], nor projects, nor programs, nor desires or attachment to any created thing. No longer do I want to possess anything, not even any little thing. O blessed poverty, O sacred indigence! Blessed will that day be in which I shall see myself perfectly stripped of all things, and in which, seeing myself bereft of all, shall be clothed by thee, in thee, and for thee! O adorable Jesus! Thou alone art the only one who is truly poor, and in whom God reigns sovereign without any opposition! Let us speak of Thy poverty, O my Saviour! A poor life, a hidden life with suffering, a life of unspeakable privations.”

This is a veritable ode to poverty. One hears in Mother Mectilde’s words echoes of her Franciscan experience as an Annonciade. One understands that even long after her profession as a Benedictine, the Friars Minor regretted her loss to the Seraphic family. One understands also that, as a Benedictine, she had close spiritual friendships with several sons of Saint Francis. For Mother Mectilde, however, the true icon of evangelical poverty is the Sacred Host. It is the Eucharistic Jesus, hidden, stripped of every appearance of His humanity and of the glory of His divinity, silent, and immobile on the corporal, in the tabernacle, and in the monstrance, who reveals that poverty is the horizon over which dawns the splendour of the kingdom.

Miraculously Poor in the Divine Eucharist

Jesus was poor in the virginal womb of His glorious Mother, poor in the manger, poor during the flight into Egypt, poor in the house of Joseph, poor and penitent* in the desert, poor in His life of preaching, poor upon the Cross, poor in His death, and miraculously poor in the divine Eucharist. This extraordinary poverty gives to God, His Father, an infinite glory and causes Him to reign in a perfect manner. And this same kingdom of God is in us, but only one who is perfectly poor may come to know it. Those whose hearts are not pure will never possess it. It is revealed only to the poor and to little ones (cf. Matthew 11:25), who are no longer anything in themselves, and who are buried in littleness and in nothingness. When all things are so consumed in the soul, then does Jesus rise up, like a splendid sun in the heaven of the soul — that heaven is the innermost place of the spirit and of its substance — and there He shines, filling its interior with glory, with joy, with love, and with ineffable blessings.

* Some readers may be startled by Mother Mectilde’s application of the adjective “penitent” to Our Lord Jesus Christ. She is using an expression that was not uncommon among the spirituals of her day, particularly in reference to Our Lord’s forty day fast in the desert, during which He, though sinless, took upon Himself, like the scapegoat, the sins of sinners and assumed, in their place, the penance incumbent upon them.