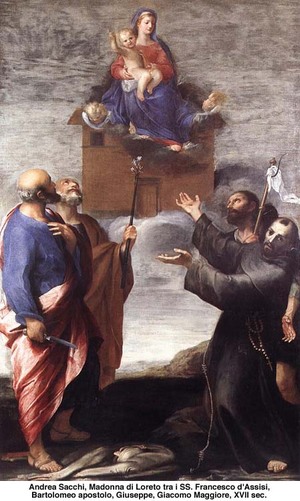 A Learned Rabbi
Today is the feast of Saint Bartholomew, the apostle whose other name is Nathanael. A native of Cana in Galilee and a friend of the Apostle Philip, Nathanael was a rabbi learned in the Scriptures. Tradition says that he preached the Gospel in Armenia and India. Apart from that we know little about him. In art, one can recognize him by the flaying knife that he holds in his hand, a symbol of his gruesome martyrdom.
Come and See
Philip introduced Nathanael to Jesus. Philip simply repeated the words of Jesus to Andrew and Simon Peter: “Come and see” (Jn 1:39). The most effective apostolate is the one by which souls are brought directly to Jesus by means of a simple invitation. Arguments, disputes and debates are to no avail; it is the experience of Christ that convinces and converts. How often has exposure to the Most Holy Eucharist — the sacramental experience of the living Christ truly present — been the occasion of a complete conversion!
A Man Without Guile
Our Lord saw in Nathanael a man free of the torturous complications that so often affect pious people. Nathanael had the prized virtue of simplicity; Jesus called him “a true Israelite in whom there is no guile” (Jn 1:47). Nathanael had no hidden agenda. What came out of his mouth was what he held in his heart.

Simplicity
One of the occupational hazards of the devout life is the loss of simplicity. Unless we are vigilant, everything can become endlessly complicated. The virtue of simplicity affects both persons and things. It is related to the virtues of truthfulness, temperance, and chastity.
One is lacking in simplicity when one dissimulates what one is really thinking, when one conceals one’s true motives, ambitions, or goals in a manipulative discourse. One is lacking in simplicity when one deploys all the tactics of an exaggerated diplomacy — flattery, mental reservation, feigned ignorance, and all the rest — to arrive at one’s end. One is lacking in simplicity when one uses guile and veiled threats to get the things one wants. One is lacking in simplicity when one organizes one’s life in such a way as to avoid asking permission for things.
What Are You Hiding?
If you want to examine your conscience on the virtue of simplicity, begin by asking yourself if you are hiding anything. Etymologically, simplicity means without folds. One can hide a lot of things in the folds of one’s garment, but also in the folds of one’s speech, or in the folds of one’s behaviour. The simple person has nothing to hide.
Clutter
Simplicity in things is the sign of interior simplicity; conversely, if you want to be simple inwardly, you can begin by simplifying things outwardly. Clutter is the enemy of simplicity. The contemporary addiction to variety is another manifestation of the loss of the virtue of simplicity. Things also become complicated when one attempts to please every one or when every one claims the right to express his particular like or dislike. Then, instead of having one thing only, one amasses a multitude of things. The result is incoherent and shabby.
A Capacity for Truth
People who are complicated and lacking in straightforwardness, people who struggle with the virtue of simplicity, do well to adopt Saint Nathanael as a particular patron. Simplicity is a disposition of inner readiness for the splendour of the truth. Seeing Nathanael’s capacity for truth, Jesus promises that he will see heaven laid open and “the angels of God ascending and descending upon the Son of Man” (Jn 1:51).
Through Christ
Christ comes to re-establish the ladder which Jacob beheld in a dream (Gen 28:12-15); he comes to re-open communication between heaven and earth, commerce between earth and heaven. This is why every prayer of the Church is made per Christum Dominum nostrum, through Christ our Lord. God spoke to Saint Catherine of Siena about this very mystery, saying, “I want you to look at the bridge of my only-begotten Son, and notice its greatness. Look! It stretches from heaven to earth, joining the earth of your humanity with the greatness of the Godhead” (The Dialogue, ch. 22).
The Body of Christ
All of this was revealed to Nathanael in a language that he would come to understand only after Our Lord’s Passion, Death, Resurrection and Ascension, only after the outpouring of the Holy Ghost at Pentecost. For us, all that was announced to Nathanael is present here. The Body of Christ, offered and received in Holy Mass, is the ladder upon which the angels of God ascend and descend. The Body of Christ, offered and received in Holy Mass is the bridge spanning earth and heaven. This is the mystery hidden from those who strategize, and revealed to the simple.