Skip to content
HomeLent 2011Come to Me and drink 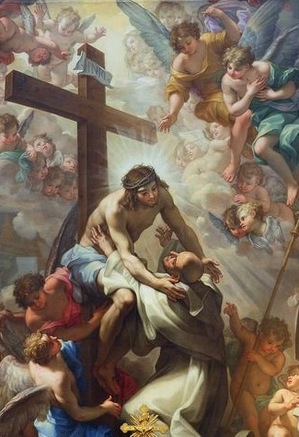 Have mercy on me, O Lord,
for man hath trodden me underfoot:
all the day long he hath afflicted me,
fighting against me.
V. My enemies have trodden on me all the day long:
for they are many that make war against me.

Today’s Introit expresses the prayer of a soul locked in spiritual combat with the powers of darkness. Having entered Passiontide, the final phase of the Great Fast, it is inevitable that the Evil One should assault the catechumens, the penitents, the clergy, and all the faithful of the Church, lest they arrive safely in the serene harbour of the Lord’s Passion.

It is not unusual in Sacred Scripture to find the Evil One referred to as “man,” particularly in the psalms. The Introit describes his wicked tactics: by afflicting a soul all the day long he seeks to cause a deadly weariness, by fighting against a soul without reprieve he seeks to stir up sentiments of despondency.
The soul under attack has but one recourse: to cry out to the Lord for mercy, and to pray ceaselessly with confidence in the victorious love of Christ Jesus.

(As it is written: For thy sake we are put to death all the day long. We are accounted as sheep for the slaughter.) But in all these things we overcome, because of him that hath loved us. For I am sure that neither death, nor life, nor angels, nor principalities, nor powers, nor things present, nor things to come, nor might, Nor height, nor depth, nor any other creature, shall be able to separate us from the love of God, which is in Christ Jesus our Lord. (Romans 8:36-39)

Sanctify our fasts, we beseech Thee, O Lord,
and in Thy mercy grant us pardon for all our sins.

The Church prays wisely, boldly, and concisely — such is the genius of the Roman Rite. A fast sanctified by the Holy Ghost becomes an act of worship, an offering pleasing to God. Awareness of our sins should lead not to a loss of confidence in the Divine Mercy, but to a serene and trusting appeal for the pardon of Him “Who forgiveth all thy iniquities: who healeth all thy diseases. Who redeemeth thy life from destruction: who crowneth thee with mercy and compassion.” (Psalm 102:3-4)

The story of Jonas’ mission to the city of Ninive, with its images of fasting, sackcloth, and ashes, recalls the beginning of Lent on Ash Wednesday. It is not too late to enter into Lenten repentance, not too late to begin one’s Lent with humility and sincerity of heart. The workers of the eleventh hour will not be deprived of their reward at Pascha. “And God saw their works, that they were turned from their evil way: and the Lord our God had mercy upon His people.” (Jonas 3:10). 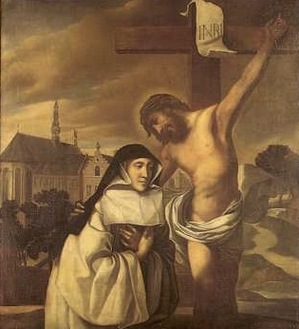 Today’s Holy Gospel shows us Our Lord Jesus Christ in Jerusalem on the last and great day of the festivity of Tabernacles. On this day, according to the Temple ritual, the priest in service would go to the pool of Siloe bearing a vessel of gold. Having drawn water from the pool of Siloe, he would return to the Temple amidst great solemnity, and there, having mixed the water with wine, he would pour it over the corner of the altar of holocausts. This ceremony recalled the water gushing from the rock during the Exodus and, in a prophetic manner, was a sign of the abundance of graces that would spring from the advent of the Messiah.

In the water mixed with wine splashed over the corner of the altar, Jesus sees an image of the blood and water that will flow from His own side opened by the soldier’s lance. He cries out, inviting anyone who thirsts to approach His Heart, the wellspring of living water. One who approaches the Sacred Side of Jesus to drink from its inexhaustible stream becomes a living temple indwelt by the Three Divine Persons. The life of the indwelling Trinity is a fountain in the innermost depths of the soul. The water that springs therefrom irrigates the will, causes the fruits of the Holy Ghost to flourish, illumines the intelligence, and pacifies the senses. 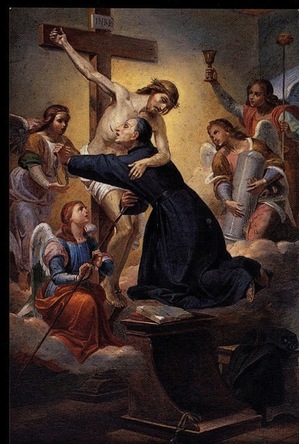 All through history, Our Lord has summoned souls to drink from His Sacred Side. Alongside the written commentaries on the Gospels left us by the Fathers and Doctors of the Church, there are iconographic commentaries. These are, in every way, as valuable as those bound between the covers of books. Among the various iconographic motifs in the West that illustrate today’s Gospel, we find that of the amplexus, or the mystic embrace of the Crucified Jesus. In such paintings, one sees Our Lord detaching His arm from the cross in order to place it around His loved one. He guides the head of the loved one to His Sacred Side until, with lips placed against the open wound, the soul drinks deeply of the living water that refreshes, purifies, and inebriates with love.
Among the saints depicted in this fashion are Saint Bernard of Clairvaux, Saint Francis of Assisi, Saint Lutgarde, Saint Gertrude the Great, and Saint Paul of the Cross. What these saints experienced mystically is available to us sacramentally so often as we approach the adorable Mysteries of Our Lord’s Body and Blood.

Today’s Communion Antiphon, although remarkably brief, is clothed with a rich melodic vesture in the Third Mode. The melody extends the text and, in some way, caresses it, making it easier to assimilate. The text itself hearkens back to the Sanctus of the Mass: Sanctus, Sanctus, Sanctus, Dominus Deus Sabaoth. The Lord of Hosts (Dominus virtutum) of the Communion Antiphon is the Lord God of Heavenly Hosts (Dominus Deus Sabaoth) of the Sanctus. He whose coming is announced in the Benedictus qui venit — Blessed is He who cometh in the Name of the Lord — is the very One who comes to each communicant in the Sacrament of His Sacred Body and Precious Blood. I can only imagine the impression made on communicants when the repetition of this antiphon accompanied the Communion Procession. Him whom you are about to receive, Him whom you have just received, is the Lord of Hosts, the King of Glory, and you have become His temple, His tabernacle, His throne.